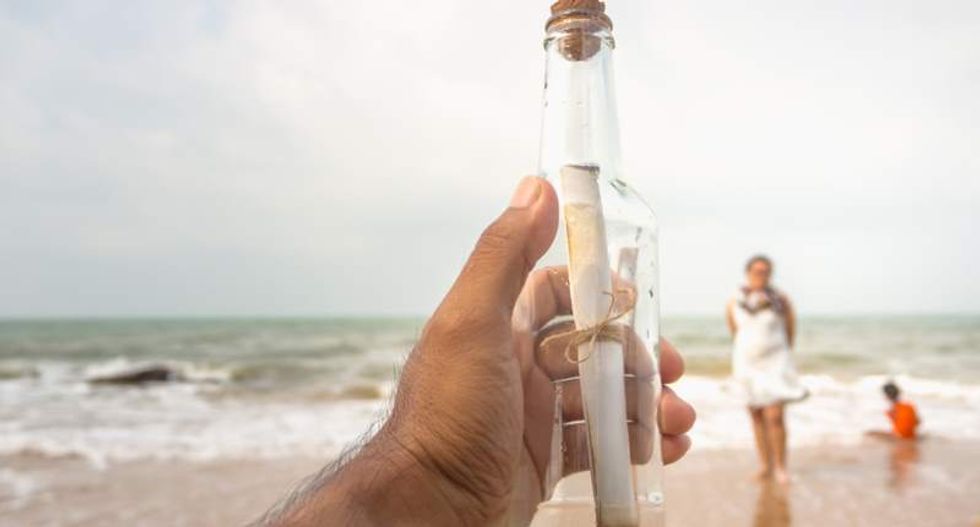 'Message in a bottle' [Shutterstock]

The world’s oldest message in a bottle recently washed up on the North Sea island of Amrum, in Germany. It was one of 390 such bottles placed in the ocean by scientist George Bidder back in August 1906. During the 110-year voyage, the bottle had travelled just a few hundred miles – hardly a Robinson Crusoe-style call for rescue from a far corner of the globe. But nonetheless Bidder was on to something: such messages were and still are vital for scientists seeking to understand ocean circulation patterns.

Bidder was an eminent marine biologist who worked across the globe, focused mainly on sponges. While at the Marine Biological Association in Plymouth, on England’s south-west coast, he became interested in understanding the movements of bottom-feeding animals and so perfected the “bottom trailer” bottle which sat just above the seabed, and was gently bounced along by the ocean’s deepest currents.

The bottles were either picked up by trawlers or eventually found their way to the coast. They gave an indication of flow patterns and Bidder managed to prove a much-suspected theory that bottom feeders prefer to move against the current.

Oceanographers have used such methods for many years to study flow, both at surface and near sea-bed – and the return on these messages is surprisingly good. Scientists rely on the public discovering them (usually washed up on beaches) and reporting their final position. To encourage the observer to report the bottle Bidder promised the princely sum of one shilling – which the finder received from the MBA more than a century later.

One of Bidder’s bottles.

Thousands of messages, containing everything from photos to wedding cake, are thrown to the sea to be taken on a voyage of adventure – and there is a certain romance in that. Many wash up a few hundred meters along the shore, others take a much longer journey.

I get phone calls most months about such discoveries. I once deployed 1,000 such messages myself in the English Channel to the south of the Isle of Wight. Around 400 were returned, providing invaluable information on the general flow of the region which can then be used to determine how pollutants would move in our coastal seas.

However today our knowledge of oceans currents is advanced enough that random individual messages rarely tell us some new facts of the ocean – there are no mystery “supercurrents” waiting to be discovered.

Accidental spills can nonetheless still help ocean science. In 1992, a container of plastic bath toys broke free in the Pacific off the coast of Japan and 29,000 plastic ducks, turtles, beavers and frogs made a bid for freedom. Since then these “friendly floatees” have been studied by Curtis Ebbesmeyer, a retired oceanographer and beachcomber from Seattle. Their arrival at beaches around the Pacific and, more recently, the Atlantic coast of Canada have enabled scientists to understand more about the so-called Pacific garbage patch and how water flows through the narrow Bering Strait and eventually into the North Atlantic.

There was a flurry of interest as yellow plastic ducks started to appear on British and French beaches a few years ago – but when I inspected them more closely they turned out to be distant cousins of the Pacific contingent, probably escapees from a rubber duck race in some local river.

That said, given how long plastic lasts in the environment, there is every reason to expect the friendly floatees to eventually find their way to a beach near you, wherever you live. What these ducks show is that, in time, all the oceanic waters are connected and even the water found 6km down a Pacific trench will, over many hundreds of years, reach the coast of Scotland or Brazil.

Scientists still deliberately use the message in a bottle technique these days, though they are more sophisticated now, and significantly more expensive.

Modern messaging? The author prepares to launch an Argo float off the Greenland coast.

Today there is a network of more than 3,800 “Argo floats”, which can adjust their buoyancy in order to travel at any depth of the ocean. Not only do they then go with the flow, they collect data on the temperature, salinity, oxygen and even phytoplankton levels of the oceans. To report their position and transmit data they pop up to the surface every five to ten days before returning to depth to continue their journey.

With enough power for more than three years, these robotic messages in a bottle work hard to give us details that really do advance our understanding of the oceans and the changing climate. The Argo network is worldwide – buoys have been deployed by virtually every ocean science nation on the planet and, as with all oceanographic data, the information is open access, with a new app to add the Argo data to Google Earth.

So now we can all enjoy finding messages from the ocean from our computers without having to comb the beaches, though you would lose out on that healthy sea breeze – and, as an oceanographer, I would never want to miss that.