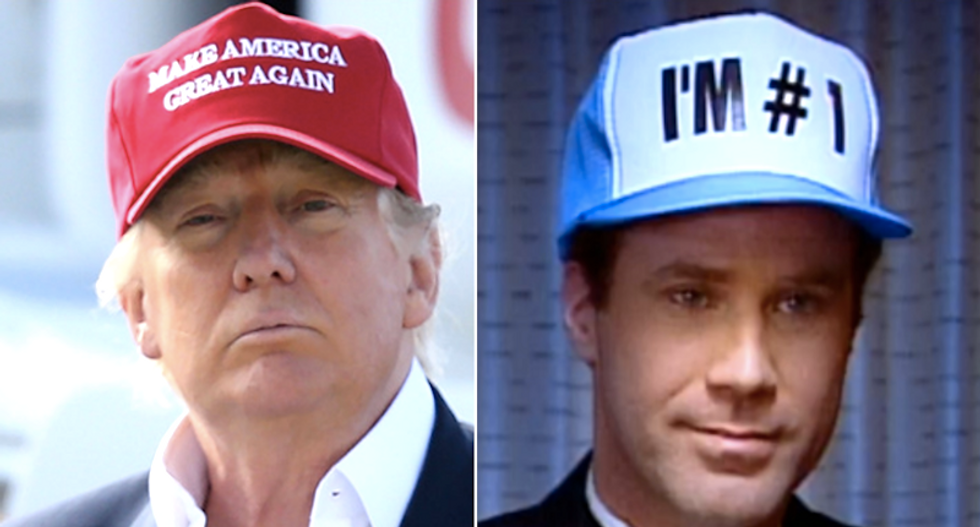 Donald Trump and Will Ferrell

There's something about Donald Trump's "make America great again" hat perched atop his ersatz hairdo that calls to mind a Saturday Night Live skit, featuring Will Ferrell as a "discriminating gentleman" who's so insecure about his own wealth and success that he takes to wearing a cheap trucker hat emblazoned with "I'm #1."

According to a scathing new profile in The Atlantic by psychologist Dan McAdams, that hat -- the goofy SNL one, not the goofy Trump one -- might actually be the extent of the real estate developer, reality TV star and Republican presidential candidate's personality.

"If you look at what his life goal has been -- and again, you can go back to, like, high school -- his life goal has always been to be No. 1," McAdams said Tuesday morning on MSNBC's "Morning Joe." "It's not to make the most money, necessarily. He says, 'Well, I like money, but mainly because it tells me what my score is, how I'm doing.'"

McAdams said Trump's core value, which can be summed up in that five-character slogan from a parody TV commercial, won't take him very far as president.

"Okay, so he's won -- and now what?" McAdams said. "Since his story for his life is all about winning, once he wins the big contest he's sitting in the White House on Day One -- now what? I think most presidents then can look to their own values and goals and belief systems, their philosophies. Bush -- excuse me -- Trump, it's all about being No. 1, so there really isn't a narrative there to guide him as president."

McAdams recounts when another writer attempted to plumb the depths of Trump's personality for a magazine profile in the 1990s and found the future presidential candidate lived "an existence unmolested by the rumbling of a soul."

"Who, really, is Donald Trump? What’s behind the actor’s mask?" McAdams wonders in his Atlantic profile. "I can discern little more than narcissistic motivations and a complementary personal narrative about winning at any cost. It is as if Trump has invested so much of himself in developing and refining his socially dominant role that he has nothing left over to create a meaningful story for his life, or for the nation. It is always Donald Trump playing Donald Trump, fighting to win, but never knowing why."

The psychologist said his examination of Trump's public comments revealed the likely GOP nominee was "off the map" as an energetic, socially dominant extrovert -- but he also scored a "rock-bottom" rating as a warm, agreeable and caring person.

"He actually has this shocking inability or non-desire to express empathy," McAdams said. "What you're looking at here is a bold, always on the offense decision-maker who's not afraid to take big risks to create the shiniest and biggest possible impact but without a whole lot of concern about the collateral damage that might ensue."

That lack of concern manifests itself in at least one semi-positive way, McAdams said.

"I'm not sure Trump holds grudges, to tell you the truth," McAdams said. "I mean, he gets out there and he fights, he tries to win, he wins a lot of times, he doesn't always win, and then afterwards, it's not like he kisses and makes up, but I think he's typically willing to let bygones be bygones and sort of move forward."