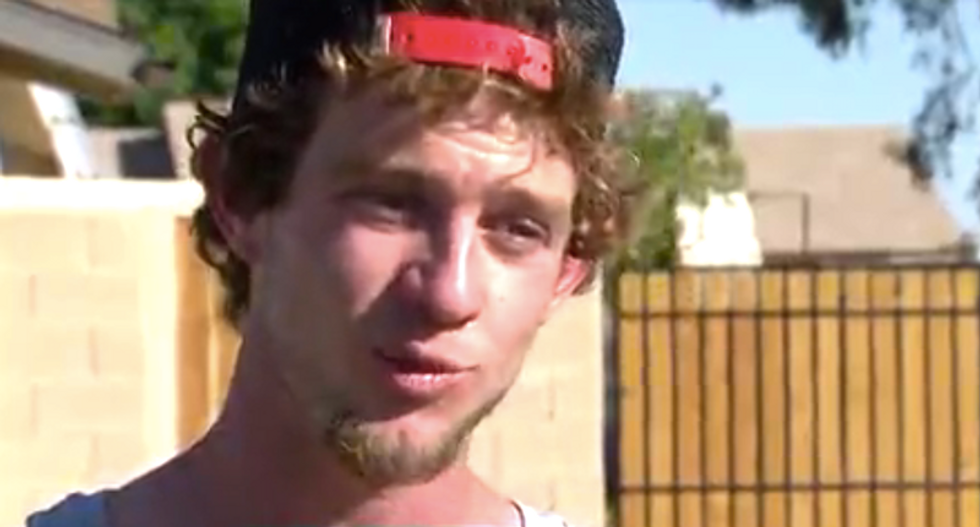 An Arizona man who was trying to be a "good guy with a gun" was arrested on multiple charges two months after he opened fire on shoplifting suspects.

John Haag was at a Walgreens in March when he spotted someone running from the store, and he asked employees if they'd been robbed, reported KNXV-TV.

The employees told Haag they had been robbed, and the chase was on.

The 25-year-old Haag ran from the store, jumped into his vehicle and pursued a U-Haul cargo van driven by the suspects, police said.

A witness recorded video of the pursuit on a busy Chandler street, and that video shows Haag pull alongside the cargo van, roll down his window, point a gun at the suspects and open fire.

The theft suspects did a sudden U-turn into oncoming traffic to get away from the gunshots.

Haag bragged on his Facebook page later that day that he had witnessed a robbery -- but "this time, I had my gun ... true story."

Police investigating the incident determined that Haag was not justified in using deadly force against misdemeanor shoplifting suspects, and he was arrested this week.

Haag told police he chased the suspects and opened fire because he wanted to be a "hero," but he later admitted that trying to shoot out the cargo van's tire on a crowded roadway was "stupid."

“I feel I had good intentions," Haag said. "I meant the best -- I meant to disable the vehicle."

He told the TV station that not enough people take action against criminal suspects.

“Most people are scared," he said. "Tons of people nowadays are in fear of what will happen to them, and that’s not cool. That’s why we have more crime."

The crime rate in Arizona has actually dropped in recent years, although not quite as sharply as the national rate.

Haag was charged with aggravated assault, drive-by shooting and unlawful discharge of a firearm.

Kevin Peevey, who witnessed the shooting while driving with his daughter, said the incident was terrifying.

"You aren't used to seeing someone pull a gun and start waving it out the window," he said.

Peevey said he supports gun rights, but he said Haag's actions were irresponsible and dangerous.

"People like that give gun owners a bad name," he said. "I'm pro-gun, but use it for safety. You don't pull it out in a very busy intersection, let alone fire it."