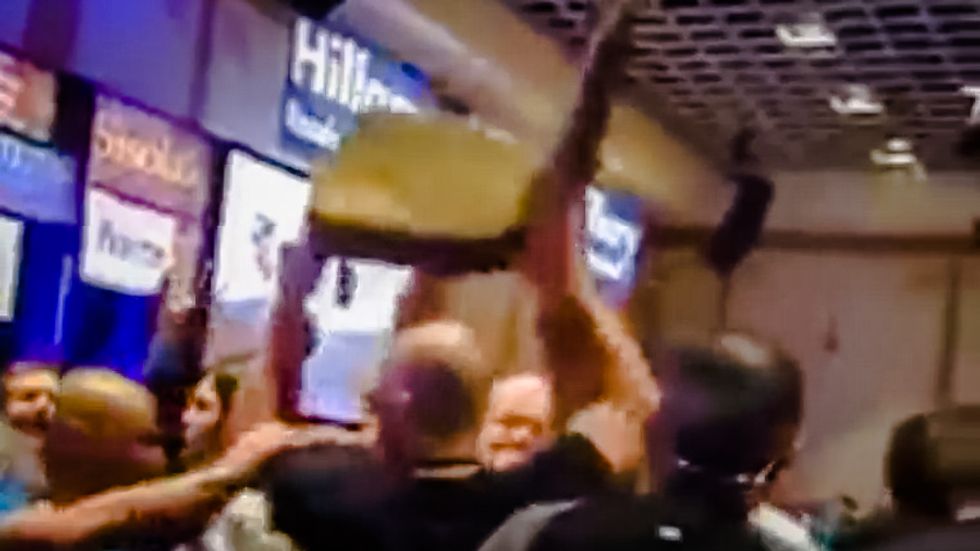 Supporters of Bernie Sanders fired back at media reports this week that the campaign had a "penchant for violence" by posting a video that they said proved a chair was not thrown during Saturday's Nevada convention, it was only "lifted in frustration."

The Associated Press reported on Monday that Democratic officials in Nevada had warned that Sanders supporters may try and disrupt the party's national convention in Philadelphia based on behavior of the rowdy crowd over the weekend.

"The gathering closed with some Sanders supporters throwing chairs; later, some made death threats against state party chairwoman Roberta Lange," the AP noted. "Sanders backers shouted down the keynote speaker, Sen. Barbara Boxer, and others they thought were tilting the rules in Clinton's favor. Protesters shouted obscenities and rushed the dais to protest rulings."

But on Tuesday, supporters posted what they said was video proof that no chair was thrown. The video shows a man at the convention lifting a chair over his head. After several other people step in to talk him down, another Sanders supporter is seen embracing the man with a hug.

RT this! NO chair throwing at #nvdemconvention - guy picks chair up, puts it down, they HUG it out. #TeamBernieNV pic.twitter.com/mBZmEeg1T5

In a "Reality Check" post on Sanders' official Reddit site, a supporter from California explained that the Nevada Democratic Party had "lied about this."

"[T]he fact is that the incident is on video, and it is crystal clear that 1.) no one threw a chair; a man lifted a chair up and was hugged by other Berners; and 2.) they lied about this," the author of the post said.

"Some irrelevant man lifts a chair in frustration and the media calls on Bernie to stop preaching violence," another supporter added. "It's insane the lengths the establishment will go to stop democracy."

"Okay, but it was pretty fucking stupid of him to lift the chair," one supporter from Minnesota charged. "Nothing good comes from a dude waving a damn chair in the air. Don't give them a reason because they will exploit it."

Raw Story could not confirm that any other chairs were thrown at the Nevada Convention on Saturday.