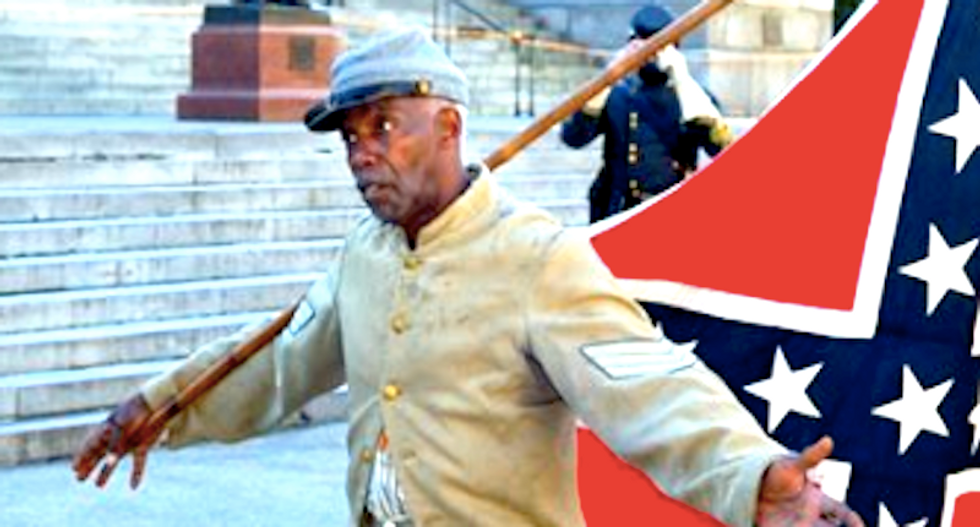 A black pro-Confederate demonstrator was met by angry Ku Klux Klan members at a Florida park in a Dave Chappelle sketch come to life.

H.K. Edgerton, the former president of the NAACP chapter in Asheville, North Carolina, travels the South wearing a Confederate army uniform to promote his belief that the seditious government was not racist.

The 68-year-old Edgerton baffled his former colleagues by campaigning in favor of pro-Confederate groups and promoting their symbols -- which many Americans perceive as antagonistic emblems of the slavery and racism.

He stood beside a Confederate monument in Asheville last year holding the "Stars and Bars" battle flag after vandals painted "Black Lives Matter" on the pedestal a week after a white supremacist who posed with the flag gunned down nine black worshipers at a South Carolina church.

He's also made lengthy -- and solo -- marches across the South over the past 16 years to promote his belief that Confederate heritage was not necessarily racist, and he's currently walking across Florida for the same purpose.

Edgerton, wearing a gray historical uniform, was paying his respects Monday morning at the Hemming Park Confederate Monument in Jacksonville when several members of an area KKK chapter confronted him, reported WTLV-TV.

The racist group argued with Edgerton until witnesses came to his defense and defused the situation.

The Southern Legal Resource Center, where Edgerton is a board member, said they weren't sure why KKK members protested the black pro-Confederate activist's demonstration.

Pro-Confederate groups rallied behind Edgerton, who has been accused by critics of "neo-Confederate revisionism," demonstrating some of the complexities about race and southern heritage that the comedian Chappelle toyed with in his old Comedy Central series.

"Mr. H.K. and the other true Southerners in Florida can handle these ignoramuses," said Facebook user Robin Foster Osorio-Pedraza. "I'm glad they're all looking out for each other. We don't like it when white supremists (sic) use our Confederate battle flag. It belongs to us, the descendants of those who served under it in the War of North Agression (sic)."

The administrator of one pro-Confederate social media page lashed out at the "freaks in the sheets" who protested Edgerton's appearance.

"To those idiots in the dunce caps.... Y'all got your asses handed to you at Stone Mountain, beat down in Anaheim, and made a fool of on CNN by a black comedian. And now this. Y'all are more like the Keystone Kops than an organization of fear. Let it go and crawl back into your momma's basement," posted the administrator of the "We Support the Confederate Flag" page.

Edgerton argued against slavery reparations in a 2006 episode of Penn and Teller's "Bullshit," and he threatened a lawsuit in 2009 against a newly elected Asheville City Council member because he was an atheist.