Clinton ally unloads on Bernie Sanders: 'Instead of taking it like a man, he's working the refs' 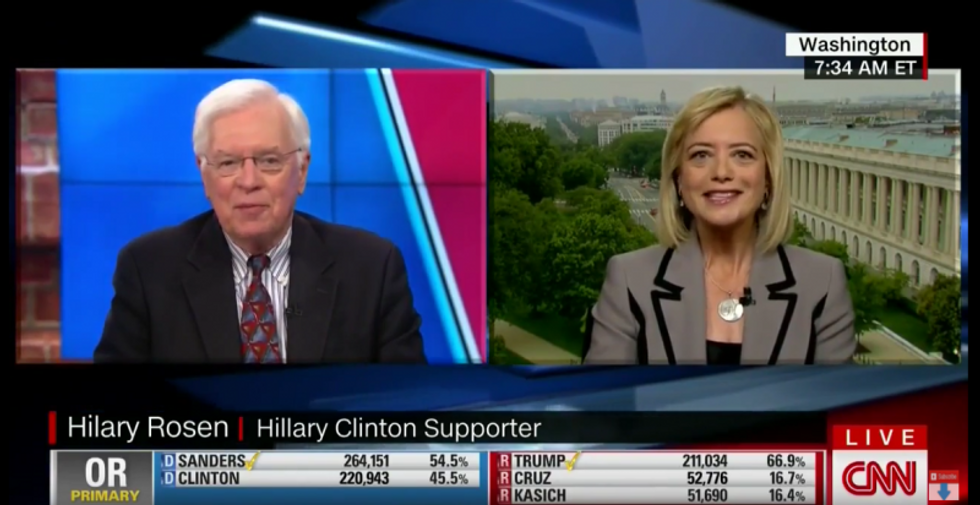 On CNN’s New Day Wednesday morning, Democratic pundits Bill Press and Hilary Rosen tore into each other over whether the Sanders campaign had legitimate complaints about the convention process or whether Sanders is simply a crybaby.

Press started off by saying that DNC chairwoman Debbie Wasserman-Schultz should behave more like RNC chairman Reince Priebus by being more impartial throughout the primary process. This drew immediate derision from Rosen, who noted that Priebus has been taking heat from all sides for purportedly being partial to different candidates throughout the GOP primary. She then said Sanders can't cope with the fact that he's getting beaten by Hillary Clinton.

"Just because Bernie Sanders is losing, all he's doing is whining about the process," Rosen said to Press. "Bill, this is beneath you, come on!"

Press backed off a bit after this, but still insisted that it's very likely that neither Sanders nor Clinton would go to the national party convention in July with the majority of pledged delegates, which could open things up to a floor fight.

Rosen, however, wasn't having it.

"Bernie Sanders is losing this race and instead of taking it like a man, he's working the refs," she said. "This constant whining and complaining about the process is in some ways one of the most harmful things he could do.

To recap what happened last weekend, here's a good description from The Washington Post's Philip Bump:

Nevada's process for sending delegates to the national convention in Philadelphia is among the most complex. When the state caucused in late February, the fourth state on the calendar for the Democratic Party, the results of that process favored Hillary Clinton. Twenty-three of the 35 total bound delegates were given out proportionally in the state's four congressional districts, giving Clinton a delegate lead of 13 to 10. The results of the caucus suggested that after the state convention — which bound the state's seven at-large delegates and five delegates who are elected officials or party leaders — Clinton would end up with a 20-to-15 lead over Bernie Sanders, with Clinton winning one more delegate from the at-large pool (4-to-3) and one more from the party-leader pool (3-to-2) than Sanders.

The people who attend the Democratic convention this weekend were chosen during voting in early April. At that point, Sanders out-organized Clinton, getting 2,124 people elected to the state convention (according to the tabulation at the always-essential delegate-tracking site the Green Papers) to Clinton's 1,722. That suggested that voting at the state convention would flip: Sanders would win those 4-to-3 and 3-to-2 contests, giving him a 7-to-5 victory at the convention and making the state total 18-to-17 for Clinton instead of 20-to-15.

In other words, the entire fracas is over whether Clinton would have a one-delegate lead over Sanders in Nevada or a five-delegate lead.

Here's the full video of Press and Rosen's argument: