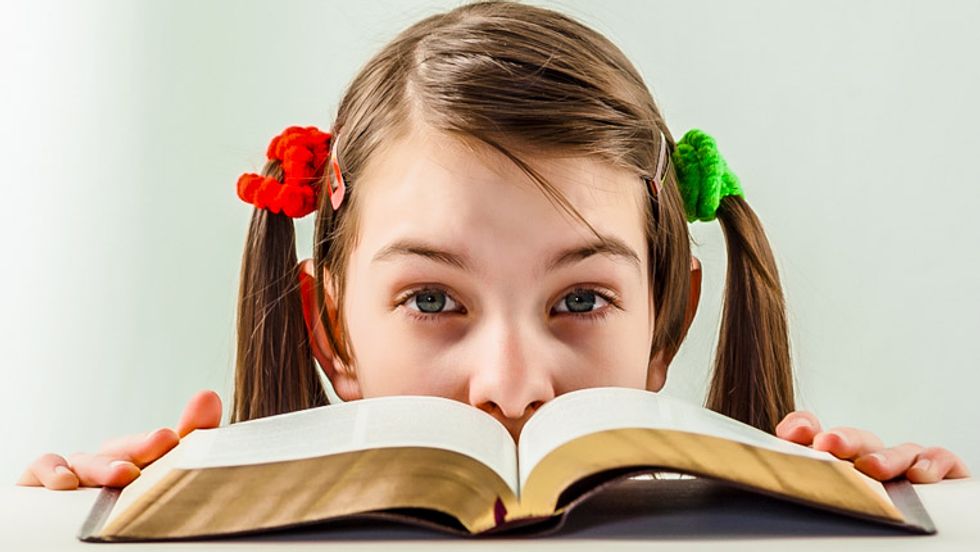 A group of ultra-conservative Christian men are planning to meet up in Kansas later this year to arrange marriages for their pubescent daughters ... and they don’t believe their daughters’ consent is actually necessary.

Quiverfull patriarch, Vaughn Ohlman, who runs a website promoting early, “fruitful” marriage for Truly True Christian™ children, has announced plans for a “Get Them Married!” retreat where fundamentalist fathers will find, and TAKE, suitably submissive young brides to bear many babies for their adolescent sons.

The weekend retreat, which will be held in Wichita this coming November, is “designed to bring together like-minded families (and their unmarried young men and women) who are committed to young, fruitful marriage and to help them overcome the barriers which have kept their children unmarried.”

For around $1200 per family, Quiverfull parents will spend three days “networking” with similarly-delusional zealots who believe men are to be in charge, wives are to be submissive baby-makers, and children are to be sheltered, isolated, indoctrinated, and pushed toward early, prolific marriages for Jesus.

How early? According to Ohlman, young men and women should get married as soon as possible:

When do boys become men and girls become women? When are their bodies developed enough to have children? When do they begin to develop romantic interest in the opposite sex, and when does fornication begin to become an issue? The Bible provides many reasons for marriage, and most if not all of them demonstrate that marriage typically ought to happen in the youth (as in, before the age of 20).

In case you’re inclined to doubt these freaks actually mean to marry off their girls the minute their bodies have developed enough to have children, Ohlman elaborates, so make no mistake about it:

John Calvin defines the “flower of her age” (1 Corinthians 7:36) as “from twelve to twenty years of age”. Likewise, John Gill defines it as “one of twelve years and a half old”. And Martin Luther says, “A young man should marry at the age of twenty at the latest, a young woman at fifteen to eighteen…” We do not endorse marriage at ages as young as twelve. Our position is that, for a woman:

Why do they want to rush their kids into marriage and coerce them to start having babies ASAP?

[W]e know from scientific studies (as well as first-hand knowledge, in many cases) that the fertility of women (and even men, to some extent) goes down steadily after the age of 20, and dips even more sharply after 30 and 40. This is even more the case if a woman has reached such an age without having had any children yet. So, by reason of these facts, it is clear that it is best to marry much earlier than 30 to better fulfill the command to be “fruitful and multiply”.

Try not to lose your lunch, cuz it gets worse. These deranged “men” don’t actually care about their daughters’ consent:

Scripture speaks of the father of the son “taking a wife” for his son, and the father of the bride “giving” her to her husband.... It gives example after example of young women being given to young men, without the young woman even being consulted, and often, in some of the most Godly marriages in Scripture, the young man is not consulted….

Some use the idea of “consent” to deny the very relevance of the action of their authorities to bind them in covenant, as if a covenant was of no effect whatsoever and all that matters is what the person themselves decide. Others consider a covenant to be something substantial but that it is not really binding until the person themselves “consents”.

In contrast, our study of Scripture has shown that the Word of God considers a covenant made by an authority to be meaningful and binding upon the those under his or her authority. Biblical consent is not the “consent” of dating or courtship. It is not a “veto” power. It does not presume to cast judgment over their father’s actions. And so, a lack of consent of the individual concerned is a choice of disobedience, a breach of a vow and of a relationship. God has designed the marriage relationship (in particular that of the virgin daughter marrying the virgin son) to be a relationship initiated by the parents, in particular the fathers, of the young couple. This is the example that God uses constantly in Scripture, and even where an example strays from this, these principles are still kept in focus.

Goddamn, these sick, delusional f*ckers … some of these patriarchs go so far as to expect to “Get Them Married!” via Ohlman’s retreat for profit:

Bride price: What is it, and why is it important? Wouldn't a bride price be like selling your daughter? A "bride price" is anything paid or given by the man or his representative at the time of his betrothal or receiving his bride.

Scripture certainly teaches about it, but it is not mandated, however, except in the case of a couple of laws. The law concerning bride price (Exodus 22:16-17) indicates that part of the punishment for fornication with an unbetrothed woman is the payment of a "standard" bride price for virgins, indicating that the bride price was a normal part of the marriage process.

The bride price plays a significant function: It shows the woman's value, and the point isn’t that the father gets the money but that he keeps it for his daughter, if her husband should ever abandon her

Heard enough? Seriously, this is the sort of what-the-fuck True Believers™ in the Quiverfull world consider “godly” and “biblical.” It’s sick and it’s scary and it’s all the more disheartening when you realize that the patriarchs take it all very, very seriously and foist this nonsense on their children … actual young women and men whose “choice” is to obediently honor their fathers, or else face the wrath of God and the hordes of Hell for daring to believe that their lives are their own to do with as they please.