What Is Quiverfull? Here's a look inside the Duggars' dangerous Christian cult 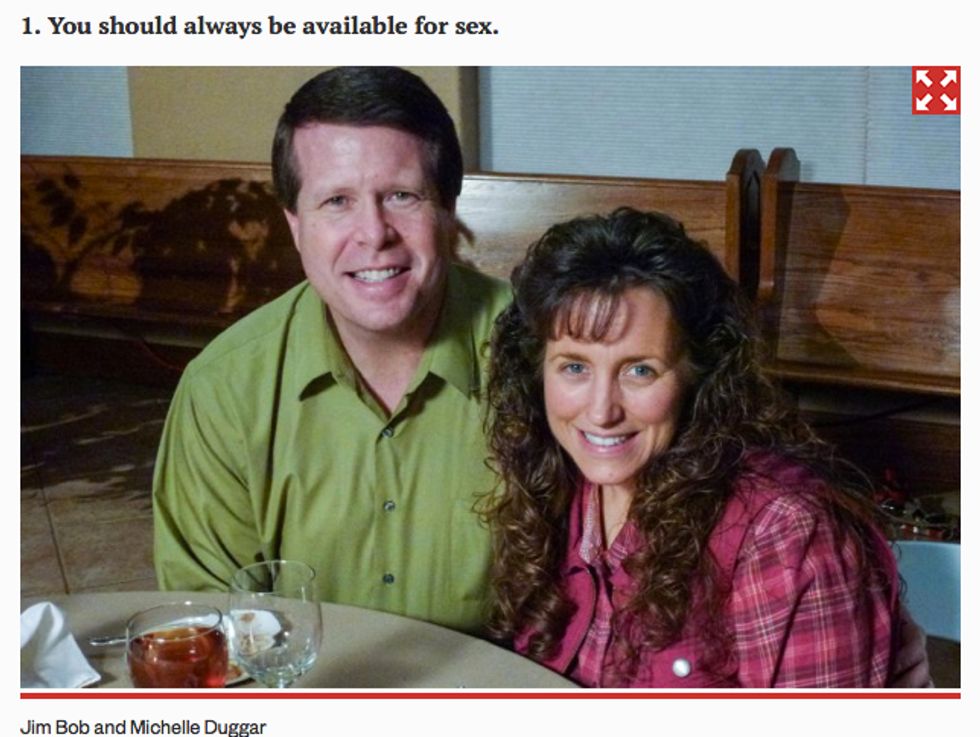 Below, she outlines the basic tenets of the Quiverfull Movement.

Q: What is “Quiverfull?”

“Quiverfull” is a convenient, though I believe, somewhat unfortunate term which we’re using at No Longer Quivering to describe a family lifestyle which is growing in popularity among evangelical Christians, particularly those who home educate their children.

Quiverfull is the idea that truly godly families will “trust the Lord” with their family planning. Children are viewed as unmitigated blessings (“As arrows in the hand of the mighty man, so are the children of ones youth, happy is the man who hath his quiver full of them”) and as such, the couple is willing to have as many children as the Lord chooses to bless them with. Artificial or chemical birth control such as the Pill or IUDs are equated with abortion: the sin of murdering your own offspring. “Natural” birth control such as Natural Family Planning is not actually “natural” because a couple must abstain at the very time of the month when the woman is naturally more desirous of physical intimacy. All methods of “conception control” are considered a lack of trust in God to provide for the “children of the righteous.”

Here’s how I described “Quiverfull” back when I still believed it:

Radically Pro-Life – A.K.A. “Quiverfull,” “allowing the Lord to plan our family,” or “trusting God with our family planning.” It is this ideal which has resulted in our having quite a few more than the average number of children. Why do Christians seek to limit the size of their families through the use of chemical birth control? The truth be told, our reasoning generally parallels that of the abortion culture – additional children will cause inconvenience, financial hardships, lifestyle constraints – all this coupled with the desire to separate sex from procreation. How can the Church expect to speak with any moral authority on the evils of abortion when we ourselves are guilty of the very anti-life values fueled by the family planning mentality?

I say that the term “Quiverfull” is “unfortunate” because, I don’t believe that many who are involved in this lifestyle would label themselves as “Quiverfull,” and also because it implies a special focus on the anti-birth control aspect of the lifestyle which is not necessarily primary among those who have adopted some or all of the beliefs associated with what might more aptly be called “the Christian family renewal movement” or the practice of “biblical family values.”

(A mouthful, I know ... which is why we continue to refer to this lifestyle as “Quiverfull” and often “QF/P” to include the patriarchal teachings as well.)

Q. Is “Quiverfull” a denomination?

“Quiverfull” is NOT a denomination. Those families which are involved are not required to ascribe to any particular doctrinal beliefs. You will find “Quiverfull” families in many different denominations, though they seem to be most heavily represented in more fundamentalist denominations (Baptist, “non-denominational,” "reformed," "covenantal," etc.) as well as churches with Postmillenial/Dominionist leanings (“Orthodox Presbyterian,” for example) and especially among home fellowships.

A few of the most popular of these suppliers include:

Quiverfull ideals are also promoted through magazines which are popular among homeschoolers including:

There are also several websites/ministries which are led by teens who are promoting the Quiverfull family values to Christian youth:

Christian parents who attend their local home school curriculum fair will find at least as much family-oriented materials as they do academic curriculum. Workshop speakers are as likely to talk about “How a wife can use reverence to build or save her marriage” as they are to teach parents how to help their high school-aged students learn advanced mathematics.

Q. What are the basic “family values” teachings which are frequently adopted by “Quiverfull” families?

Along with the idea of “trusting the Lord” in the area of family planning, here are some of the “values” which are promoted among QF/P families:

Patriarchy: This is the belief that by God’s perfect design, it is the father who is the head of the home. In his leadership capacity, the father serves as protector, provider and shepherd for his wife and children. He is primarily responsible for the wife’s and children’s physical, emotional and spiritual well-being and with such responsibility comes the (divinely granted) commensurate authority over the members of his household. According to this view, God works through the father and he serves as an intermediary for his wife and children. Honor, obedience and submission are highly valued qualities because they are necessary to maintain order and work together to accomplish the Lord’s vision for a godly family.

Courtship or Betrothal Instead of Dating: The father’s protection of and authority over his children extends especially to the choosing of a mate. In this system, the fathers play a very influential role in the “courtship” process. Every family seems to have its own take on exactly how courtship is to be carried out. Typically, if a young man is interested in a particular girl, he will consult with his father who then approaches the father of the young lady to discuss the possibility of a potential match. If the girl’s father is in agreement, he will then talk to his daughter, and if she shows an interest, the courtship (or betrothal; which is as binding as marriage) begins and this basically means that the couple is serious about getting married. The parents are in control of the relationship at all times. The couple is not to be alone together. The courtship / betrothal period is usually brief and it is expected that the couple will experience their first kiss at the marriage altar. At that time, the father’s authority over the daughter is transferred to her new husband.

Sheltering of the Children: The home school mindset includes the basic belief that children are to be protected and sheltered from “the world," i.e., outside influences which could be detrimental to the child’s spiritual well-being. It is often quoted that “foolishness is bound up in the heart of a child” … this coupled with the scripture which says, “a companion of fools shall be ruined,” leads to the logical conclusion that children (fools) should not be socialized by other children (fools), but instead should learn social skills from adults. Isolation and control of outside influences is not only considered normal and good, it is the godly approach to childrearing.

Biblical Manhood and Womanhood: The teaching is that God designed males and females to fulfill distinct roles and that men and women cannot be truly satisfied unless they are consistently filling their special role as a man or woman of God. Men are to be leaders, teachers, initiators, protectors and providers. Women are created to be “helpmeets” to the men in authority over them (husbands, fathers, older brothers). They are to be submissive and yielding. Their primary sphere of influence comes from their role as wives and mothers. The woman’s home is her ministry and her children are her mission field.

Being debt-free and independent of government programs/subsidies: Adoption of this ideal often leads to financial hardship and deprivation in large families. In order to achieve financial independence, a QF/P family will often move to a rural location or live in sub-standard housing. Wives often operate businesses out of their home, often employing the children to help with the work, in order to supplement the husband’s income. Refusal of government assistance sometimes means that these families go without medical insurance; a situation which can influence the parents to choose “natural remedies,” home birth, and similar non-medical approaches to family health.

Home Church / Family-Integrated Church: Because the family (primarily the father) is seen as the primary conveyor of spiritual guidance and teaching, Quiverfull families often seek fellowship with like-minded families in a setting which is not age-segregated. The children worship and learn alongside their parents and peer-interaction is closely monitored by the adults / young adults who are present.

Modesty: A girl or woman whose clothing is “revealing” is guilty of “defrauding” her Christian “brother." because she is tempting him with impure thoughts in relation to a body (hers) which is not rightfully his to possess. Quiverfull females often wear dresses only. Many will also wear a head covering as a sign of a woman’s submission to her “head” ... that is, her husband.

Generally the longer a Christian family is involved in the home school community, the more deeply they become involved in this “family values” lifestyle. It is a process which transforms a “normal” family into a patriarchal cult completely at odds with the general population. In fact, the more “peculiar” (set apart) the family becomes, the more they consider themselves “true believers” following “the narrow way” as opposed to their neighbors who are on the “broad path which leads to destruction.”