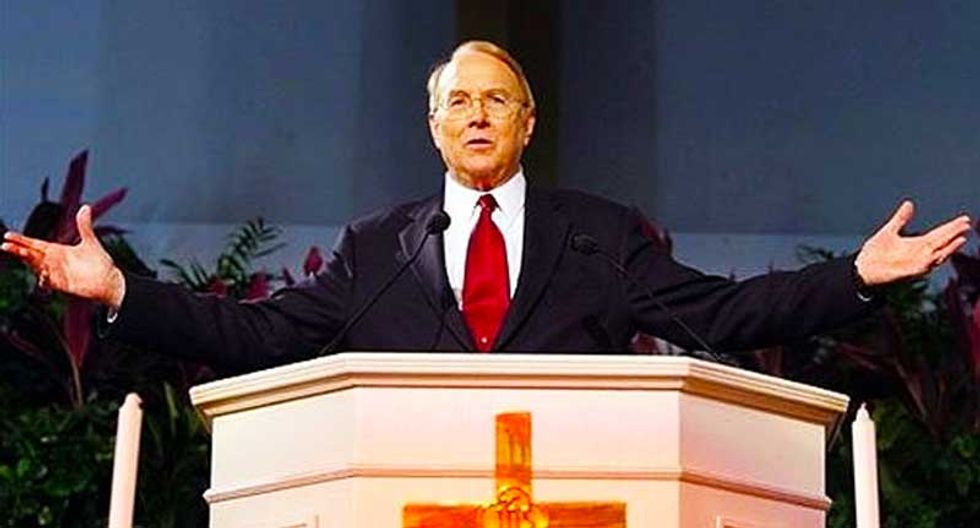 Evangelical Christian James Dobson declared President Obama a "tyrant ... [who] assault[s] centuries of modesty and moral beliefs" in his latest piece written for his organization Family Talk. The article, which was picked up on World Net Daily ('A Free Press for a Free People') and cited by Right Wing Watch, detailed Dobson's beliefs that use of bathroom facilities by "the opposite sex" now demand that Christian manhood assert itself to stop the practice.

Dobson identified the source of his strong beliefs about the correctness of separate boys' and girls' bathrooms back to an incident in third grade, when he accidentally walked into the girls' room after mistaking its door for his classroom.

"I was mortified beyond belief. I sneaked back into class and looked at the floor, wondering who might have witnessed my unthinkable crime," he wrote. "That was decades ago, but I haven't forgotten my humiliation. The cardinal rule is that boys and girls never entered each other's private facilities. Never!"

Dobson uses his own experience as a third grader to reflect on his reaction to what he describes as President Obama's order to "every public school in America to open all its bathroom facilities including those that are in use by a member of the opposite sex."

Furious, and sick to his stomach, Dobson worries that sex-absorbed adolescent males will ogle the bodies of pubescent girls, or even take showers with them. He wants to know whether his readers are as outraged as he is at a president who is "warping our children?"

Dobson comes dangerously close to echoing the same rhetoric that was used by white men in the south when organizing a lynching. Dobson decries the president making it okay to invade your wife's privacy.

"Obama, acting like a king, is wielding dictatorial powers never envisioned in the law. He is determined to change the way males and females relate to one another, and worse, how children perceive themselves. If you are a married man with any gumption, surely you will defend your wife's privacy and security in restroom facilities. Would you remain passive after knowing that a strange-looking man, dressed like a woman, has been peering over toilet cubicles to watch your wife in a private moment? What should be done to the pervert who was using mirrors to watch women and girls in their stalls?"

Dobson is certain that he knows what men would have done in the past, and he urges today's dads to do the same: Shoot them.

"If you are a dad, I pray you will protect your little girls from men who walk in unannounced, unzip their pants and urinate in front of them," he said. "If this had happened 100 years ago, someone might have been shot. Where is today's manhood? God help us!"

It is not clear if Dobson is aware that he is using the language of protecting a woman's honor by killing those who might violate it, but his language is reminiscent of the ways that mobs were whipped up to hang black men and boys for perceived slights to white women. His argument connects his beliefs that Obama is a tyrant with his beliefs that any confusion about gender identity "must be seen as damaging not only to our sons and daughters but also to the long-term stability of society itself."

Children's sexuality and gender identities are ordained by the Bible, Dobson argues. And male and female anatomy should make clear as to their purposes. "It leaves no doubt that the Creator made not one sex but two, each beautifully crafted to 'fit with' and meet the needs of each other."

Dobson finishes with a call to action:

"We must fight to protect our home and families from politically correct politicians who would create new entitlements that take away our liberties. There is no time to lose. Our children hang in the balance."