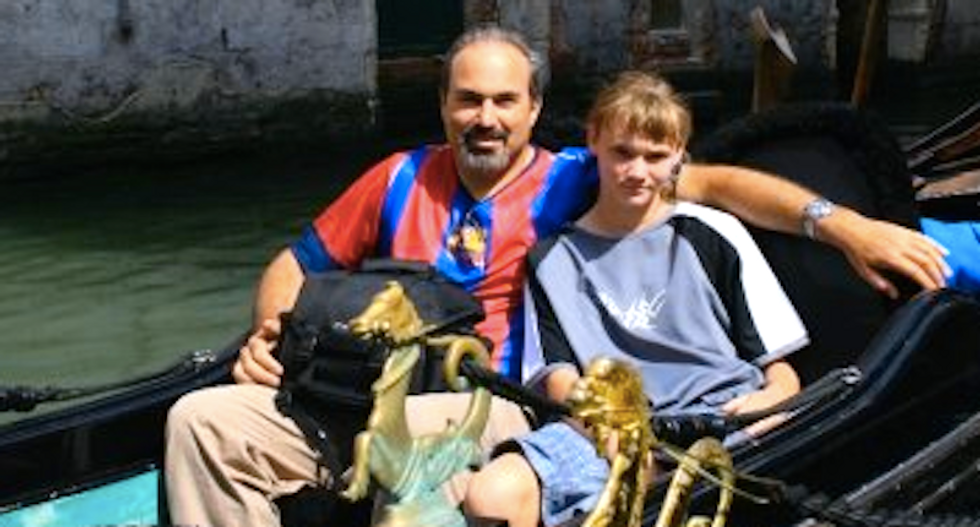 A Nevada political reporter published a touching message about how his daughter became his son.

Jon Ralston, the host of PBS’s “Ralston Live" in Las Vegas and Reno and a contributing editor to Politico, adopted Maddy Ralston nearly 21 years ago -- and "it was love at first sight."

"I cradled her in my arms, my adopted miracle, and couldn’t stop crying," Ralston wrote on his personal blog. "She was the most beautiful thing I had ever seen."

Ralston said his daughter never liked girl clothes or toys -- and even threatened to cut off a doll's head if he got one for Christmas.

Maddy, who changed his gender identity this week to male and his name to Jake, told the Washington Post he remembers "sitting on the toilet and trying to push hard enough, realizing I wasn’t going to grow anything.”

He eventually told his father he wanted to be a boy, but Ralston said he didn't take his statement seriously.

"It’s just a phase, I figured," he wrote. "So many women told me stories of their tomboy days."

He continued buying boy clothes for him, and the pair bonded closely over sports and trips to Europe after his mother's death.

"When she got to high school, she was bullied during her freshman year," Ralston recalled. "High school girls are the worst. They whispered she was a lesbian, and I figured they were right."

Maddy told his father again during his junior year that he felt like he should have been born a boy -- but he still didn't take him seriously.

"I don’t think I even listened very well when Maddy told me a few years ago he was really a male inside, that he was transgender," Ralston wrote. "Sure, you are, I thought. It’s just a phase, I was certain."

Ralston said he attributed his daughter's feelings to normal teenage confusion about identity, but he now realized he just didn't understand.

"Slowly but surely, I have come to not just accept it but to embrace it," he wrote. "I have learned a lot about transgender issues through my job. I have read a bit."

Maddy, who tried dating a boy in high school and then a girlfriend, didn't even know what transgender was until stumbling on a Wikipedia article while at the girlfriend's house and feeling a shock of understanding.

“We’re looking at it, and I say, ‘this word seems to fit,'” Jake recalled after his transition.

Ralston said he worries the current debate about transgender people's place in society would only breed fear and ignorance that could erupt as violence against his daughter -- but he said they don't understand any more than he once did.

"So many people I know and respect spout off about the issue, on social media, even in person, because they don’t know about Maddy," he wrote. "They don’t know the reality. They don’t know, so I cut them slack. They will come around. Only the hateful ones won’t."

Ralston said his daughter has faced unimaginable hatred at college.

"She has been called 'an abomination of God,' been told her mother killed herself because she was ashamed of her, that she is 'going to burn in hell,'" Ralston said. "It must be unimaginably excruciating to hear such things. I feel boiling rage when she tells me."

Ralston admits the change has been difficult for him, but accepts that his child is finally happy.

"I look around the house, see the pictures of me with my little girl and my eyes fill with tears," he wrote. "But those memories are forever, and Maddy told me not to take them down, that she cherishes those, too."

Maddy began taking testosterone six months ago, and the 20-year-old went to court Monday to have his birth certificate and name changed.

"After the hearing, when it was finally real, when he called me, I don’t think I have ever heard my kid sound so happy," Ralston said. "And he wanted the story told."

Ralston, who is traveling, will return later this week to this newly named son.

"I will see someone officially named Jake Ralston for the first time," he said. "And one thing I know for certain: It will be love at first sight."