'Grown in Washington': Check out the legal marijuana farms in DC 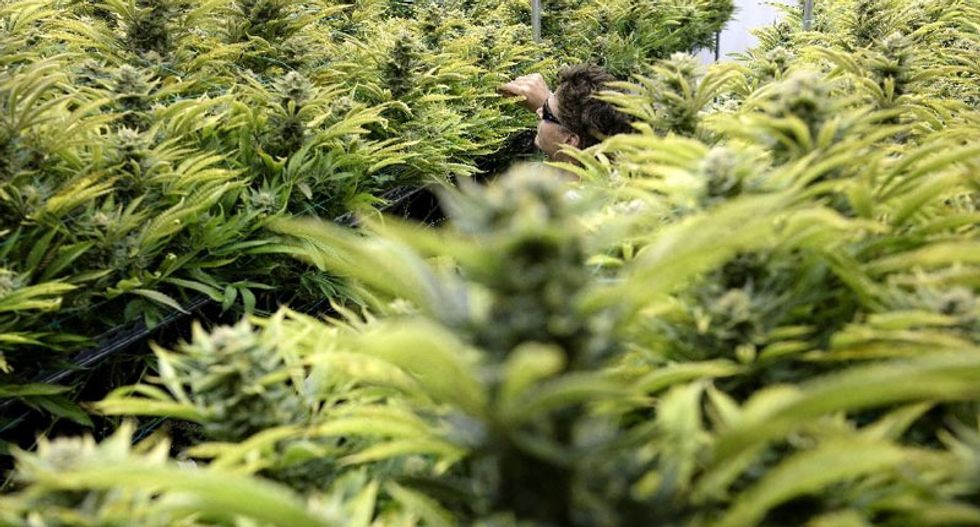 Security cameras and barbed wire suggested this was the right place -- the old warehouse on a dead-end street not far from the White House that hosts one of the handful of legal marijuana farms in the US capital.

"We're going to do the visit with a panic button... in case of a break-in," Matt Lawson-Baker, the co-owner of Alternative Solutions, told AFP.

Alternative Solutions is one of seven facilities in Washington authorized to grow medical marijuana for nearly 3,700 local patients.

Countries worldwide are examining their marijuana laws as they measure effectiveness against enforcement costs. In the United States, medical marijuana has been legalized in 24 states and the capital Washington, while recreational marijuana is legal in four states and the District of Columbia.

"We first got into business in 2012, we got approved for a license back then and we sat on it for a while. We started growing a year ago," said Lawson-Baker, who is originally from Australia.

"We thought we would make millions fast," Lawson-Baker said.

But with the Washington medicinal marijuana market still relatively small, and stiff competition already out there, he soon realized he was in it for the long haul.

Until demand takes off -- which it fully expects it will -- Alternative Solutions is growing only half of the 1,000 plants allowed by its license. 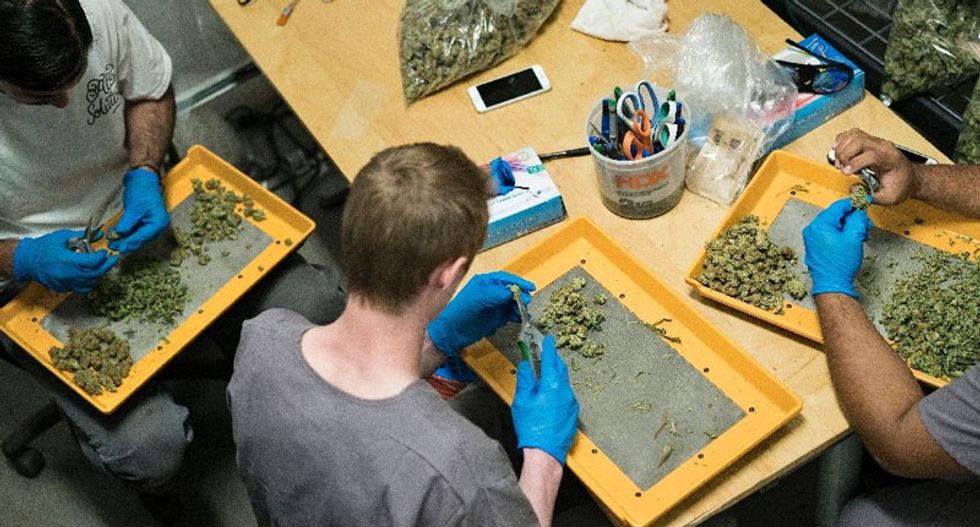 In the three harvests since November 2015, Alternative Solutions has generated $700,000 in revenue, and the owners are hoping to break even in three or four years (AFP Photo/Brendan Smialowski)[/caption]

The Australian and his American father-in-law/business partner Bob Simmons -- both of whom previously worked in construction -- are also still learning the intricacies of cannabis cultivation.

In the three harvests since November 2015, the company has generated $700,000 in revenue, and the owners are hoping to break even in three or four years.

The fourth harvest is currently underway.

A magnifying glass reveals a forest of tiny white pistils covering the leaves and buds of the marijuana plants. The aim is to have plants that look like they're covered with fine sugar -- or when viewed close-up, tiny crystals of ice.

"The more, the better," Simmons said. "You want them dumped in sugar."

During harvest, each marijuana plant is cut at the base and hung upside-down to dry for about 10 days before the buds are cut off and trimmed.

The trimmings are processed into powder ($40 per gram) or resin ($90 per gram). Those products and the buds themselves are then sold in Washington's five official marijuana dispensaries.

Those in the cannabis business hope Washington will one day fully legalize recreational marijuana.

Since February 2015, anyone over 21 in Washington can consume marijuana on private property, possess up to two ounces (56 grams) and grow as many as six plants.

However, the legal purchase and sale of marijuana for recreational use are not permitted, leading to an explosion in street sales.

"The police doesn't know how to handle things so basically they turn a blind eye to it," Lawson-Baker said.

With more and more US states allowing medical and recreational marijuana use, it seems he was smart to get in early: the country's marijuana market is estimated to reach $22 billion in 2020, up from $4.6 billion in 2014.

In its immaculate 3,600 square foot (335 square meter) growing area with a surprising lack of any distinctive smell, Alternative Solutions is pampering 12 varieties.

"Blue Cheese" is pungent and stings the nose, while "AK47" -- unexpectedly -- is softer. "Green Love Potion" supposedly has aphrodisiac qualities while "Goji OG" remains the best-seller.

The temperature and humidity are slightly higher in areas with flowering plants, compared to the rooms for incubation and the mother plants, which provide cuttings and never bloom.

"It's a heaven for marijuana. We've created the best environment in which they could grow in," Simmons said.

Their secret: a high-performance watering system that includes filtration, oxygenation and the addition of plant-based nutrients. Filming or photographing the system was strictly off-limits.

Much of the growing operation, including temperature and watering, can be controlled remotely over the Internet.

The 84 flowering plants receive about 200 gallons (750 liters) of water per day, and are grown without chemicals or pesticides.

From the cutting to the finished product, everything is labelled and can be traced by barcode. The warehouse is inspected monthly by health authorities and police.

Like their competitors, Lawson-Baker and Simmons are anxious to find out who will be the next occupant of the White House, just three miles (five kilometers) from their marijuana farm. The next president's views on marijuana will play a major role in shaping future policies on the substance.

The pair remain optimistic: they've already obtained a second license to grow in Washington, are waiting for another in the neighboring state of Maryland and have plans to branch out on the East Coast. And they're planning to roll out edible medicinal marijuana products this summer.