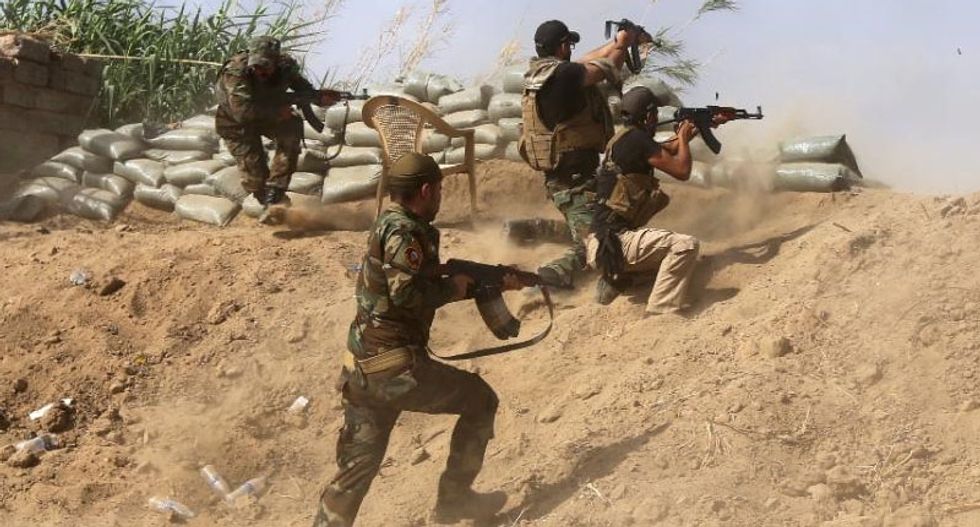 Islamic State militants killed a U.S. Navy SEAL in northern Iraq on Tuesday after blasting through Kurdish defenses and overrunning a town in the biggest offensive in the area for months, officials said.

The elite serviceman was the third American to be killed in direct combat since a U.S.-led coalition launched a campaign in 2014 to "degrade and destroy" Islamic State and is a measure of its deepening involvement in the conflict.

"It is a combat death, of course, and a very sad loss," U.S. Defense Secretary Ash Carter told reporters during a trip to Germany.

A U.S. defense official, speaking on condition of anonymity, said the dead serviceman was a Navy SEAL. The SEALs are considered to be among the most able U.S. special operations forces and capable of taking on dangerous missions.

A senior official within the Kurdish peshmerga forces facing Islamic State in northern Iraq said the man had been killed near the town of Tel Asqof, around 28 kilometers (17 miles) from the militant stronghold of Mosul.

The Islamic State insurgents occupied the town at dawn on Tuesday but were driven out later in the day by the peshmerga. A U.S. military official said the coalition had helped the peshmerga by conducting more than 20 air strikes with F-15 jets and drones.

The official, speaking on condition of anonymity, said the Navy Seal was killed "by direct fire" while on a mission to advise and assist local forces in Iraq.

Carter's spokesman, Peter Cook, said the incident took place during an Islamic State attack on a peshmerga position some 3-5 km behind the forward line.

Such Islamic State incursions are rare in northern Iraq, where the Kurdish peshmerga have pushed the militants back with the help of coalition air strikes and set up defensive lines that the militants are rarely able to breach.

The leader of a Christian militia deployed alongside peshmerga in Tel Asqof said the insurgents had used multiple suicide bombers, some driving vehicles laden with explosives, to penetrate peshmerga lines.

The Kurdistan Region Security Council said at least 25 Islamic State vehicles had been destroyed on Tuesday and more than 80 militants killed. At least 10 peshmerga also died in the fighting, according to a Kurdish official who posted pictures of the victims on Twitter.

The peshmerga also deflected Islamic State attacks on the Bashiqa front and in the Khazer area, about 40 km west of the Kurdish regional capital Erbil, Kurdish military sources said.

In mid-April the United States announced plans to send an additional 200 troops to Iraq, and put them closer to the front lines of battle to advise Iraqi forces in the war against Islamic State.

The Islamist militants have been broadly retreating since December, when the Iraqi army recaptured Ramadi, the largest city in the western region. Last month, the Iraqi army retook the nearby region of Hit, pushing the militants further north along the Euphrates valley.

But U.S. officials acknowledge that the military gains against Islamic State are not enough.