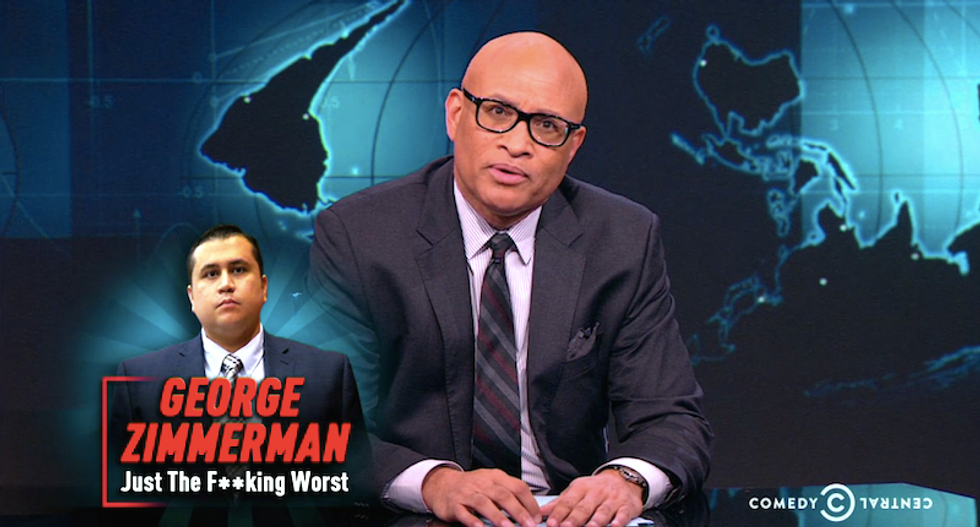 Larry Wilmore lashed out at "societal malignant tumor" George Zimmerman, who's trying to auction off the gun he used to kill Trayvon Martin.

Zimmerman, who was acquitted in the 17-year-old's 2012 shooting death, returned to the news -- where he sometimes surfaces with reports of road rage attacks, domestic violence accusations or bizarre run-ins with the police -- with his auction.

"Who woke up this rotting piece of human excrement?" Wilmore wondered Thursday on "The Nightly Show."

Zimmerman told reporters he didn't feel comfortable simply locking the weapon away, and Wilmore said a lot of Americans would feel more comfortable if the former volunteer neighborhood watchman were locked away.

"You don't have to lock it away," Wilmore said. "You can just throw it in the trash. You know, trash -- that thing that you are and always will be."

Zimmerman portrayed himself as a courageous American with a right to do whatever he wants with his own possessions, and Wilmore suggested he take that possession and shoot himself with it.

The original ad for the handgun listed its condition as "used," and the description notes that the gun was used to "defend" Zimmerman's life and "end the brutal attack from Trayvon Martin."

America, I need to ask a serious question: What the entire f*ck?" Wilmore said.

Zimmerman noted in the sale listing that the gun had recently been returned to him by the U.S. Department of Justice, and he claims his defense attorney thwarted efforts by "B. Hussein Obama" to "render the firearm inoperable."

"I love how racists can work in a Muslim slam in any unrelated conversation," Wilmore said. "He really killed two birds with that racist stone. Of course, then he also claimed the birds were attacking him."

Zimmerman said museums, such as the Smithsonian, had asked to display the gun -- which museum officials have denied.

"Here's why this gets me so angry," Wilmore said. "Every time George Zimmerman is a trending topic on Twitter, every time his name pops up on the news, every time he takes up any real estate in my brain at all, it's a reminder that he's a free man who can do whatever dumb shit he wants, while Trayvon Martin doesn't get to grow up."

"George Zimmerman, you can go to hell," he added.