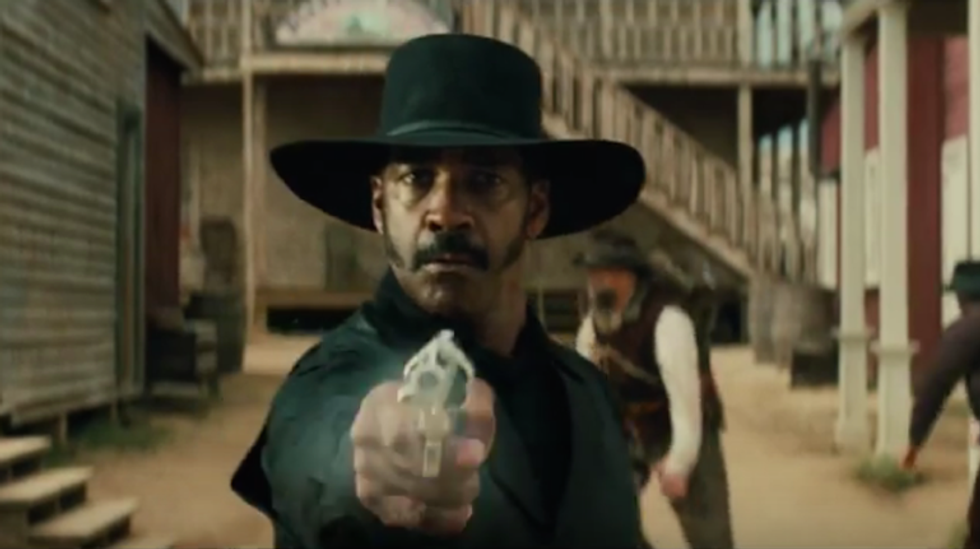 From the chiseled, insouciant Robert Mitchum and the rugged, laconic Clint Eastwood to John Wayne, the most celebrated cowboy of all, Hollywood's Western icons are invariably strong, brooding -- and white.

The roles they play, too -- legendary frontiersmen like Jesse James, Billy the Kid and Wyatt Earp -- are typically ranchers, lawmen or outlaws battling for money or land on behalf of White America.

It is little surprise then that the racial makeup of America's real Wild West -- a melting pot of Europeans, Chinese, Mexicans, Native American and blacks -- remains one of the country's best-kept secrets.

Filmmaker Antoine Fuqua, who is in post-production for the hotly-anticipated "Magnificent Seven" remake, is one of a few big directors pushing back, having cast long-time collaborator Denzel Washington as his leading man.

"I said it needs to be an event and it needs to be something we haven't seen -- and more diverse. I said Denzel should play the lead role," Fuqua said during a recent visit by AFP to his Los Angeles edit suite.

Fuqua's film is a reimagining of the 1960 western starring Steve McQueen -- which in turn was a remake of Akira Kurosawa's Japanese-language epic "Seven Samurai."

Released in the United States through Sony in September, the movie follows Quentin Tarantino's Westerns "Django Unchained" and "The Hateful Eight" among the few Hollywood hits about black cowboys.

"The Magnificent Seven", which also features South Korea's Lee Byung-hun as well as white A-listers Ethan Hawke and Chris Pratt, follows the well-worn trope of a band of heroes defending a community against unscrupulous bandits.

"Now it's just not the white cowboy, the white soldier, but it's all of us together. It's white, black, Asian, Indians. It doesn't matter anymore... We all have to come together to fight tyranny," said Fuqua, 50.

Many of the slaves brought over in the 17th and 18th centuries, familiar with cattle herding from their homelands in West Africa, carved out better lives on the open range.

Black cowboys were working on ranches throughout Texas by the early 19th century, and many more were employed after the civil war to break horses and herd cattle across the rivers.

Yet this period is almost universally misrepresented as a part of "white history" in American schools, according to Jim Austin, president of the National Multicultural Western Heritage Museum in Fort Worth, Texas.

"What we found is that if you talk to some (modern) cowboys they'll say 80 percent of the cowboys were actually people of color," Austin told AFP.

The accurate figure is probably closer to 40 percent across the Western Frontier, he said, while other historians put it at a more conservative one in four, and only in some parts of Texas.

Austin points to "The Lone Ranger", a fictional masked gunslinger on TV and radio -- and eventually cinema -- who battles outlaws with his Native American sidekick Tonto, as an example of Hollywood compounding ignorance over race in the Old West.

The character is widely believed to have been inspired by Bass Reeves, a real-life black lawman who, legend has it, went through his entire career without being shot, despite bagging 3,000 outlaws.

"Hollywood took Bass's story and they flipped it, from an African-American man -- six feet two inches (1.88 meters), black hat, black horse, sidekick a Native American, always got his man -- and turned it into 'The Lone Ranger,'" Austin said.

The historian said Hollywood feared prominent black characters would scare away white audiences, although studies of modern day moviegoing consistently show that films with diverse casts tend to do better at the box office.

The Oakland Black Cowboy Association, which stages an annual parade to raise awareness of the role of non-whites in settling the Old West, points out that people of all nationalities plied the great cattle trails and built the railroads.

The California group's spokesman, Andre Alporter, said Hollywood's predominantly white producers, writers and directors tend to "create stories and images that uplift them as a race."

"They are the heroes, they wear the white hats, they go into exploding buildings and save the planet," he said.

"It's like white men did it all: 'I thought of it, I invented it, I created it, I built it.' And that's not a representation of true America."