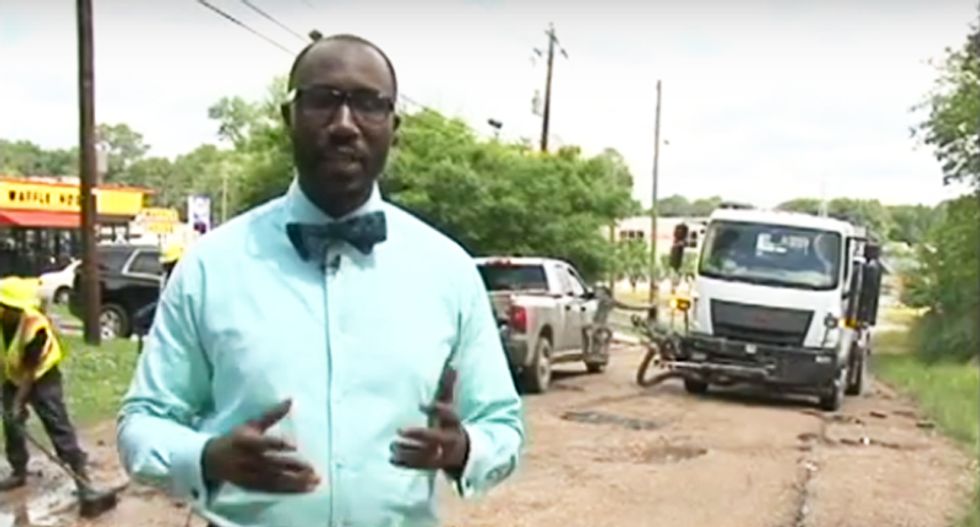 The mayor of Jackson, Mississippi is once again on the receiving end of ridicule after a video of him highlighting workers filling potholes in his town led followers to find an earlier tweet claiming that they could be repaired with the power of prayer.

Mayor Tony Yarber -- who also is the founder and pastor of the Relevant Empowerment Church -- filmed a public service announcement this week for "We Are Jackson," excitedly announcing that potholes in the southern town were in the process of being repaired by city workers.

A search thorough Yarber's Twitter timeline turned up a tweet (see below) of the mayor previously stating they could be filled with prayer.

"Yes....I believe we can pray potholes away. Moses prayed and a sea opened up. #iseeya #itrustHim #prayerworks." Yarber tweeted.

Initial responses to the mayor's tweet expressed incredulity, with some asking if he was serious.

"Are you f*cking kidding me?! I have a better idea… Pay to have them filled!" Glenn Garner wrote, with Yarber responding, "We tried that."

Garner sarcastically tweeted back: "So praying is the obvious alternative."

Kyle Jones added, "Moses also hit a rock and water sprang forth, so why are we paying for city water and sewage?"

After posting the PSA to his Twitter account, Garber was questioned about his past statement about the pothole-healing power of prayer, with one poster writing: "I thought he was going to pray for them to be fixed. Did God deny his prayer?"

Ever mindful of social media, Yarber replied that his prayers were answered, writing: "Absolutely not. I'm never denied. Go to http://data.jacksonms.gov to see infrastructure plans."