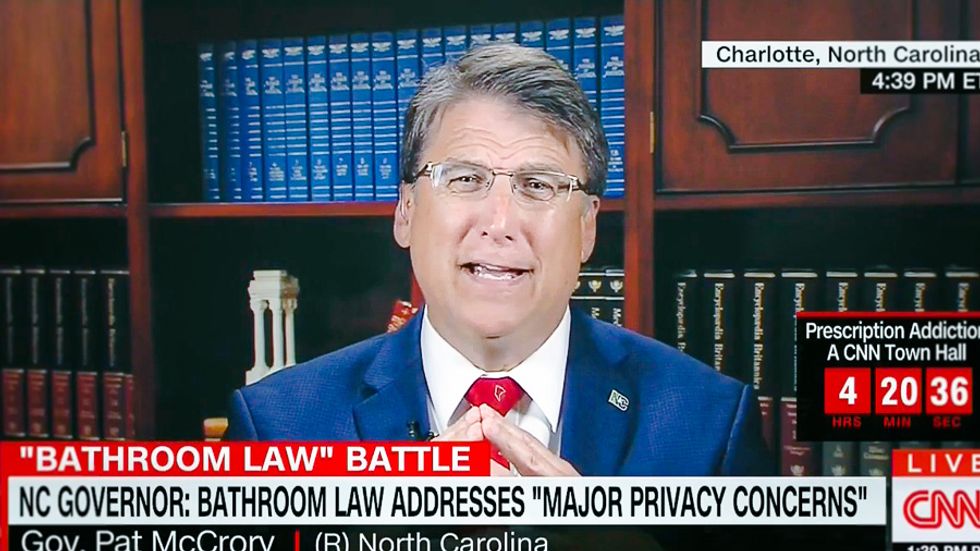 North Carolina Gov. Pat McCrory (R) asserted on Wednesday that the U.S. Congress should review the entire 1964 Civil Rights Act because he did not like the way the Department of Justice was using it to protect transgender bathroom rights.

Speaking to CNN host Jake Tapper on Wednesday, McCrory accused Democrats of starting a fight over transgender bathroom rights by passing an ordinance in the City of Charlotte that allowed transgender people to visit public restrooms that correspond to their gender identity.

"I think that this was an argument that we didn't need to have," McCrory opined. "But this is an agenda by the far left. And for some reason, the national media is saying the far right brought this up. I had no interest in this subject."

"But the Justice Department is basically making a civil rights claim that every private sector employer in the U.S. and every university in the United States must have gender expression or gender identity bathroom choices for individuals," the governor complained.

Tapper pointed out that transgender children "have a very difficult time fitting in, they have very high suicide rates."

"What are you telling the teachers at schools in North Carolina where, say, a 12-year-old who identifies as a girl, though her birth certificate says boy, what do you tell teachers about her if she's using the girl's bathroom?" the CNN host wondered.

McCrory argued that the solution was to "make special circumstances" by allowing the transgender girl to use a segregated bathroom.

"But now the Civil Right Division of the U.S. Justice Department has deemed those types of arrangements to be discriminatory," McCrory remarked.

"You just said you were sensitive to a child's needs?" Tapper noted. "Are you not making that child's life much more difficult?"

"I'm also worried about the other kids," McCrory replied. "There's an expectation of privacy for the other girls or other boys."

"Can you imagine the potential problem there?" he continued. "And so we need to look through these problems and not throw hand grenades at these issues because it's a new sensitive issue on all sides, for families, for young girls and boys, and for the transgender population."

"But to have the Justice Department come out with a massive interpretation of the Civil Rights Act for every employer in the United States now is something that I think need clarification by the federal courts."

In fact, McCrory suggested that Congress should take a look at gutting the entire Civil Rights Act over the issue.

"I think there's a time where the Republicans and the Democrats in this Congress need to revisit the 1964 Civil Rights Act, and revisit all this issue," the first-term governor opined. "Because these are complex issues and North Carolina for whatever reason politically has become the target by the left on this agenda."