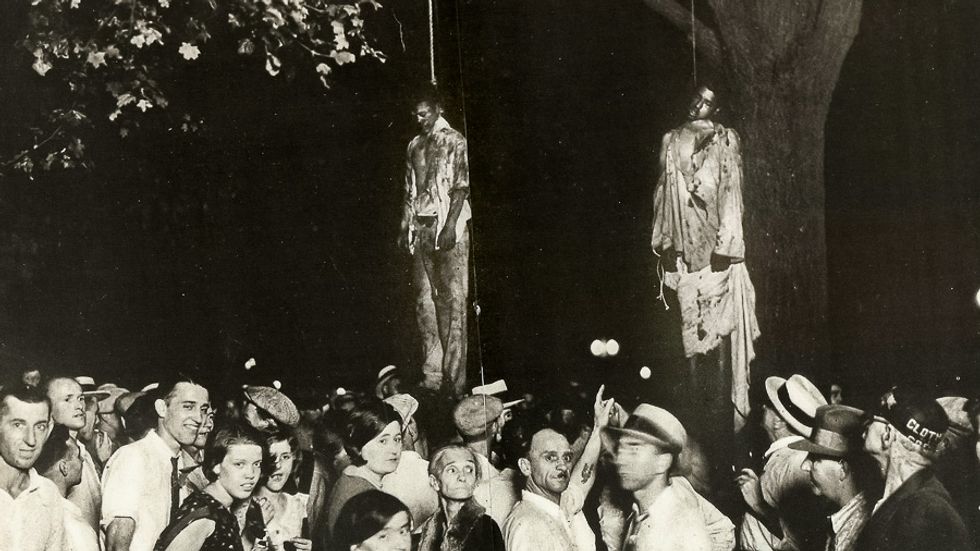 Lynching of Thomas Shipp and Abram Smith in Indiana on August 7, 1930 (Wikimedia Commons)

Pulitzer Prize winning writer Leonard Pitts, Jr. argued this week that the auction of a gun used to kill Trayvon Martin dates back to when body parts of lynched black men were traded as "trophies."

Over the past few weeks, the man who killed Martin, George Zimmerman, has been trying to auction off the weapon as memorabilia. He has promised to use part of the proceeds to combat the Black Lives Matter movement.

Several gun auction sites have refused to list the Kel-Tec PF9 9mm handgun on ethical grounds, but the United Gun Group agreed this week to go forward with the auction.

In a column for the Miami Herald on Tuesday, Pitts explained that the fascination with memorabilia from the killing of black men is nothing new.

Pitts likened the auction to souvenirs taken from the body of Sam Hose, a black man who was lynched by a mob of 2,000 white people in Georgia in 1899.

"They did all the usual things," Pitts wrote. "They stabbed him, castrated him, skinned his face, mutilated him, burned him alive."

Then they parceled out pieces of his body.

You could buy a small fragment of his bones for a quarter. A piece of his liver, “crisply cooked,” would set you back a dime. The great African-American scholar, W.E.B. DuBois, reported that Hose’s knuckles were for sale in a grocer’s window in Atlanta.

No, it wasn’t enough just to kill Sam Hose. People needed mementos of the act.

"Apparently, it wasn’t enough just to kill Trayvon Martin, either," the columnist noted. "George Zimmerman is offering 'only' the gun that did the deed. But there is a historical resonance here as sickening as it is unmistakable."

"Once again, a black life is destroyed. Once again, 'justice' gives the killer a pass. Once again, there is a barter in keepsakes of the killing," he lamented. "People claimed hundreds, thousands, of trophies from the murders of African Americans. They kept bones. They kept sexual organs. They kept photographs of themselves, posed with mutilated corpses."

According to Pitts, the auction of Zimmerman's gun "feels like a victory lap on a dead boy’s grave. It feels like America once again caught in its own lies."

"One is left breathless, not just with anger, not only with frustration, not simply with a sense of betrayal but also with a grinding fatigue at the need to, once again, ride out an assault on the basic humanness of African-American people," he concluded. "African-American life is thereby — again — debased, and the nation, shamed."