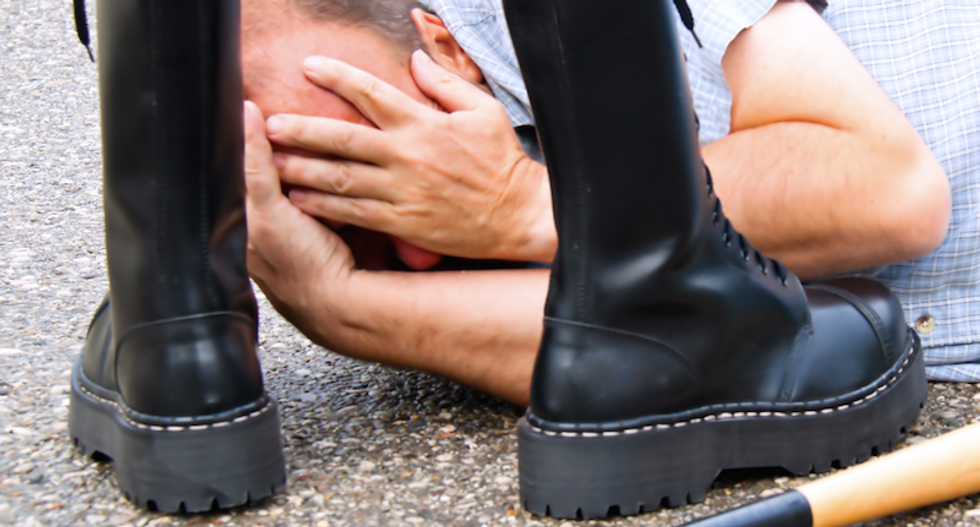 Police are trying to determine whether a notorious white supremacist left threatening leaflets on vehicles in a Sacramento neighborhood.

The leaflets warned against "white genocide" -- a white nationalist slogan -- and threatened targeted violence against Muslims and Hispanics, reported the Sacramento Bee.

The fliers urged "white resistance groups and lone wolves" to activate the "hundred little death camp policy" and begin slaughtering Muslims and Latinos in the U.S., Europe and Russia.

“If you have not secured a body dump-site, do so now!" the leaflets warn. "Kidnap, rob, torture for information and execute all Muslims and Latinos. Leave no survivors.”

The letters are signed by Greg Withrow, a white supremacist who in 1979 co-founded the forerunner to the skinhead Aryan Youth Movement that eventually displaced the Ku Klux Klan.

In a 1986 speech, Withrow called for the "total extermination of all subhuman, non-Aryan peoples from the face of the North American continent: men, women and children, without exception or appeal" -- but claimed he had renounced his hate group ties a year later.

He appeared on Oprah Winfrey's talk show and others, and Woody Harrelson considered making a movie based on his autobiography -- but Withrow later admitted he had faked his conversion, and a six-year marriage to a Mexican-American woman, to spy on government agents and civil rights groups.

Withrow even staged his own crucifixion, which left his hands useless, as part of his falsified conversion -- and he partially crucified himself a second time in 2005 at the California statehouse to protest immigration and the Iraq War.

Authorities in Butte County, just north of Sacramento, linked Withrow to hate literature distributed in the city of Paradise, but investigators haven't confirmed whether he's actually involved in the latest round of white supremacist pamphlets.

Sacramento police said they were investigating the case “with the seriousness it obviously deserves" -- but they're not certain the fliers broke any laws.

"The first amendment does protect the right to free speech, even if that speech is deplorable or despicable," said Officer Matthew McPhai, of Sacramento police. "Part of the investigation will be trying to determine if there is some crime associated with the distribution, some sort of other act that has taken place."

Muslims and Hispanics who live in the area said they hoped police wouldn't wait until the fliers inspired violence or some other criminal activity.

"Unfortunately, with the increased political rhetoric, the attacking of immigrants, Mexicans and Muslims, we're seeing an uptick in incidents around the country," said Bassim Elkarra, executive director for the Council on American Muslim Relations.

Neighbors said they believed Withrow, who is well-known in the area for his extremist activities and statements, had distributed the leaflets to attract attention to himself.

"He's guaranteed going to get some followers cause there's a lot of hate in this world," said resident Kimberly Winzer.

Withrow did not respond to media requests for comment, and the case remains under investigation.