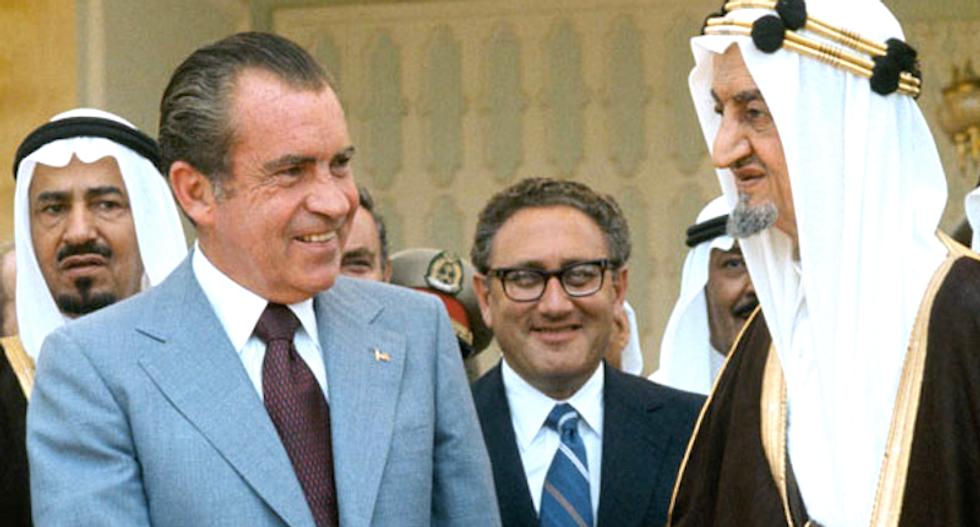 Richard Nixon and King Faisal at the Riasa Palace on July 15, 1974 (National Archives)

Saudi Arabia agreed to prop up American debt and spending in exchange for military aid and equipment as part of a secret agreement dictated by former President Richard Nixon.

The diplomatic and economic agreement was reached in July 1974, at the height of the oil crisis, on the condition of secrecy -- but newly revealed documents show how the kingdom entangled its fortune with the economic survival of the U.S., reported Bloomberg News.

Nixon insisted on the deal to neutralize crude oil as an economic weapon and to prevent the Soviet Union from establishing a foothold in the Arab world, and the former president also hoped the kingdom would finance the growing U.S. deficit with its new oil wealth, the website reported.

But the recent collapse of oil prices has stoked fears that Saudi Arabia might sell off those Treasury assets to raise money, and some economists and other observers fear the kingdom could use its U.S. debt holdings as a political weapon.

Saudi Arabia warned in April that it would sell up to $750 billion in Treasury securities and other assets if the U.S. Congress passed a bill that would allow the kingdom to be held liable in court for the Sept. 11, 2001, terrorist attacks.

That threat comes during a bipartisan push by presidential candidates and lawmakers to declassify a 28-page section of the 9/11 investigation report that is believed to detail Saudi ties to the terrorist attacks.

The bill passed the Senate on May 17 and is now under consideration by the House of Representatives.

The U.S. hitched its economy to Saudi Arabia's oil wealth nearly 42 years ago following high-level meetings between Nixon's treasury secretary, William Simon, and Saudi royalty -- who insisted that details about the arrangements and negotiations remain secret.

Saudi Arabia did not want other Arab nations to discover its money was helping stabilize the American economy after OPEC nations punished the U.S. with an oil embargo for its support of Israel during the 1973 Yom Kippur War.

Those details did remain secret until the U.S. Department of the Treasury complied with a Freedom of Information Act request submitted by Bloomberg News, which reported details of the kingdom's heavy investment in American debt.

Saudi Arabia is one of America's largest foreign creditors, with $117 billion in holdings, but one former Treasury official said the official figure "vastly understates" its investment in U.S. government debt.

The real figure might actually be twice the official amount, that former official said on the condition of anonymity.

The current amount represents about 20 percent of the $587 billion of foreign reserves, which below the two-thirds that central banks typically keep in dollar assets, the website reported.

But some analysts believe Saudi Arabia may be hiding its U.S. debt holdings by buying Treasury securities through offshore banks, which show up as investments by other nations.

The U.S. concealed Saudi investment by arranging Treasury sales that were excluded from official government auction totals and bypassed the competitive bidding process, and by 1977 the kingdom held about 20 percent of all Treasuries held abroad.

The Treasury hid those investments by lumping Saudi holdings with 14 other nations -- such as Kuwait, the United Arab Emirates and Nigeria -- and described them as generic "oil exporters."

Treasury officials then guarded the arrangement from public scrutiny with the International Investment and Trade in Services Survey Act of 1976, which shields individuals in countries where Treasuries are narrowly held.

That practice continued even after the Government Accountability Office found “no statistical or legal basis” in 1979 for the secrecy, and concluded the U.S. must have made "special commitments" to Saudi Arabia and possibly other OPEC nations to keep their financial investments confidential.