Right-wing dipsh*ts attack Jimmy Kimmel for Sarah Palin — and man, they are dumb 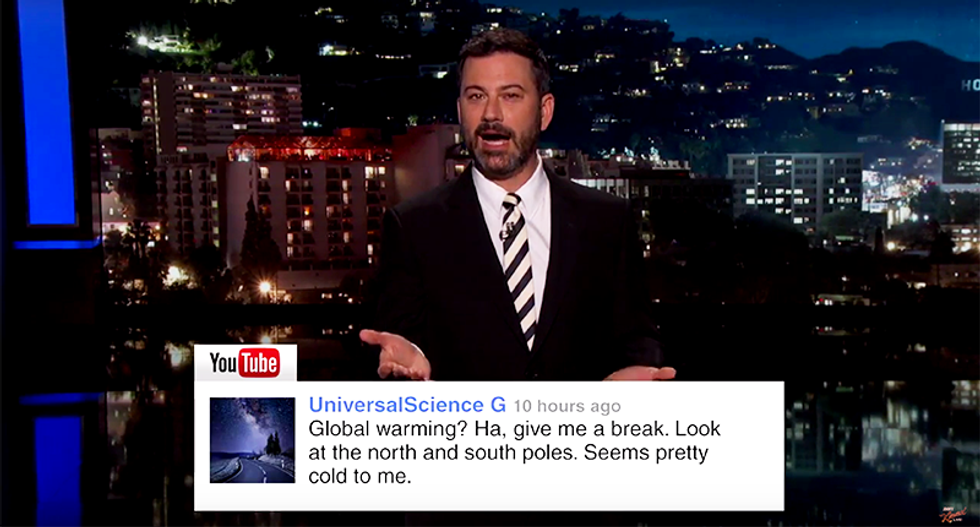 Monday night, Jimmy Kimmel absolutely destroyed of Sarah Palin’s rambling stupidity on climate science. Kimmel gathered a group of scientists who stood in front of the camera and tried to explain to the world that their business is not about generating a massive hoax.

But, the right-wing internet trolls predictably and collectively lost their minds. So, Kimmel does what he does best, and read them aloud for the world to shame them in disgust. "It might seem I only picked comments from people whose grammar is bad, but the truth is, the vast majority of the comments came from people whose grammar is bad, so..." Kimmel prefaced before showing the tweets. This vitriol consisted of things like:

Jim Jacob: "Mr Kimble if you are so smart many you should get a real job like climate scientists I give up you!."

Erik Simmy: Sarah Palin might not be a scientist what she is saying doesn't need to be science to be understood the very scientists who claim to be telling the truth about global warming they know they're lying to teeth to help the government control our lives in the name of global warming.

Thomas Slavin (Whose avatar is a Ted Cruz logo): "Hey Jackass Scientists also thought the world was flat Do us all a big favor reduce man made gases and shut your yap!!!"

From YouTube someone wrote in the comments "This character is as dopey as that moronic looking beard apparently! Although I think the beard IS smarter than he is."

Another YouTuber: "Global warming? Ha, give me a break. Look at the north and south poles. Seems pretty cold to me."

There are more you've got to see in the video. They're hilarious: