School janitor molests 9-year-old girl -- then runs her over with golf cart for reporting him: suit 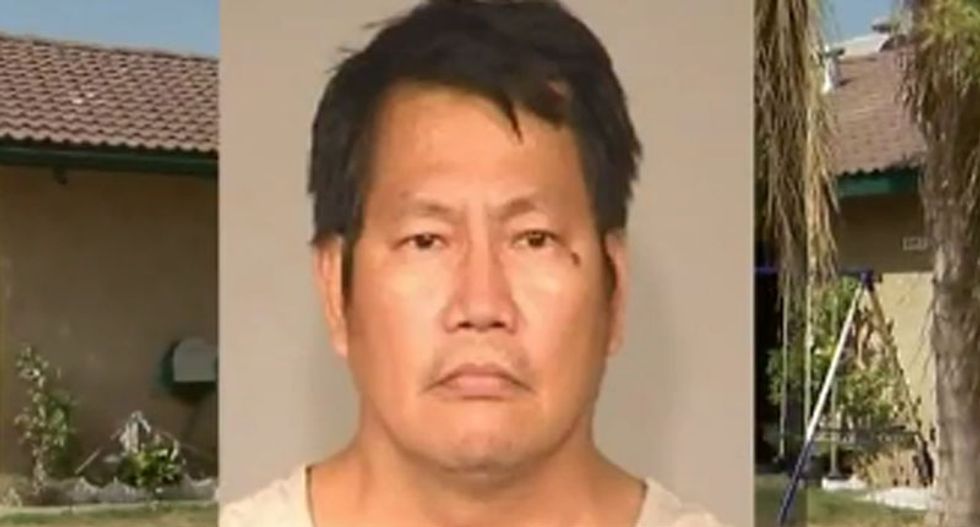 An elementary school janitor allegedly ran a 9-year-old girl over with a golf cart and slapped her twin sister in the face after the two students told school officials he touched them inappropriately.

According to a lawsuit reported by Courthouse News Service, the Fresno Unified School District did little stop the janitor – 52-year-old Benjamin Wong – despite receiving complaints. Wong was arrested last year in October after being accused of touching several students inappropriately over the span of at least two years.

The lawsuit, filed by two victims, claims that Wong sexually abused 11 girls and one boy at Norseman Elementary School in Fresno.

The two victims, the twins A.S. and A.J.S., allege that Wong touched their buttocks and genitals, stroked their hair and bodies, and used a hidden camera to take pictures of them.

The girls reported Wong to school officials. But Wong found out about their complaints.

He responded by punching A.J.S. in her head and running her over with a golf cart, according to Courthouse News Service. Wong also reportedly grabbed A.S. by her ponytail, slapped her face, and struck her with a broom while she was in a stall in the girl’s restroom.

The lawsuit states that school officials received numerous complaints about Wong’s behavior, but continued to employ him and failed to prevent him from being alone with children.

"Unfortunately, staff and administration had all the warnings that would cause a reasonable person to comply with their mandated reporting requirements; however, they all chose to turn a blind eye to the ongoing sexual abuse of their female students that would occur on a daily basis," the complaint states.

Fresno Unified placed Wong on leave after police began investigating the allegations. The district said in a statement: “Fresno Unified placed the employee on administrative leave in conjunction with law enforcement’s investigation. The employee resigned in late July and no longer works for the district. We will continue to take aggressive action against employees that do not reflect the high professional standards the District expects of staff.”

Wong was charged with 6 misdemeanor counts of annoying or molesting a child after admitting to police that he slapped girls on the buttocks.

His defense lawyer denies the act was sexual."At all relevant times, there were always multiple witnesses to these alleged touchings which will negate any sexual connotation," said defense attorney Roberto Dulce.