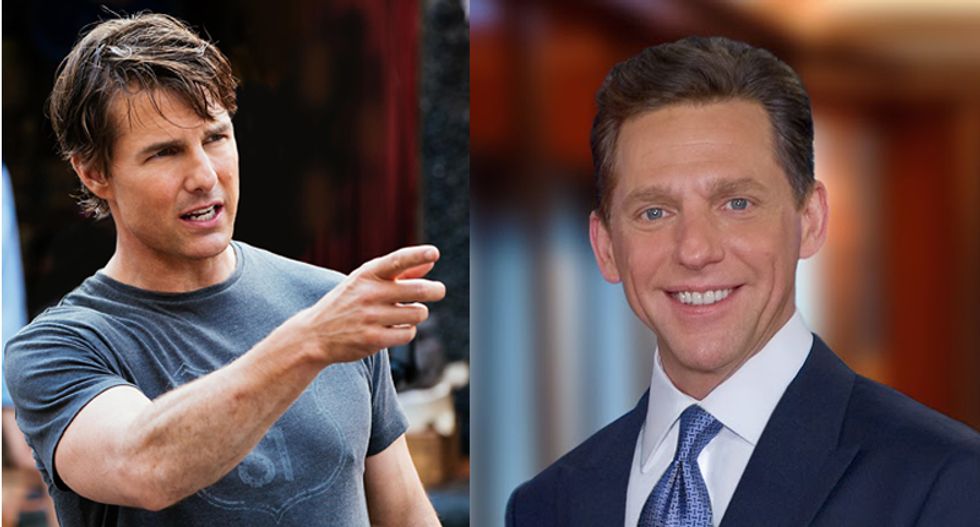 Scientology leader David Miscavige banished his wife to a secret church facility in the secluded San Bernardino National Forest in Southern California, according to a new tell-all book written by his father.

Shelly Miscavige has been seen publicly only once since 2005, at her father's funeral two years later, although police have investigated several missing persons reports and reported she was alive and well but did not wish to make any statements.

The 55-year-old Miscavige has spent most of the last decade at the church's International Base in Hemet, California, according to reports -- but Ron Miscavige's new memoir confirms suspicions that she's since been sent to live in a secret compound with about a dozen other Scientologists.

Shelly Miscavige, who came to the church at 12, was a feared member of Scientology's Sea Org team and reportedly helped arrange the marriage between actors Tom Cruise and Katie Holmes.

Ron Miscavige said his daughter-in-law sent him birthday presents and cards in the early days of her banishment, but those dwindled off to nothing over the years.

“A former staff member told me recently that he used to see my presents in the mail center in the basket for the facility near Lake Arrowhead in the San Bernardino mountains, where I believe Shelly has lived since about 2005,” he wrote.

Tony Ortega, a former executive editor for the Raw Story who reports extensively on Scientology, has written about Shelly Miscavige and her situation.

He reported that Shelly Miscavige was essentially deemed a "non-person" by her husband after the couple clashed over her role in the church, and she was sent away in August or September 2005 after asking another Scientologist whether David Miscavige was still wearing his wedding ring.

Leah Remini filed a missing persons report in 2013, after leaving the church she grew up in, but Los Angeles police said they determined that she was not missing or in danger.

"Shelly does have some limited communication with the outside world, and was asked by a family member how she might be able to leave the base," Ortega reported in 2013. “'There’s only one way,' she responded, and former Scientology spokesman Mike Rinder told us he interpreted that to mean that only another family funeral would allow Shelly to go outside the confines of the compound."

But both her father-in-law and Ortega believe she will never be allowed to leave the secret compound, where supposed enemies of the church and its leader are sent to live and work.

"We believe that she’s still at the CST headquarters, and she may or may not be resigned to her fate," Ortega wrote. "We’ve been assured by former Scientology executives that David Miscavige put her there after making her a non-person, and that he will never let her leave."

Trump pardons corrupt Republicans, rapper Lil' Wayne, and 143 others -- but not Rudy Giuliani

Of those were former California Republican Congressman Duke Cunningham, who pleaded guilty for accepting receiving over $2.3 million bribes. Another Republican was Rep. Robin Hayes who was party to one of North Carolina's largest corruption scandals. He never served time.