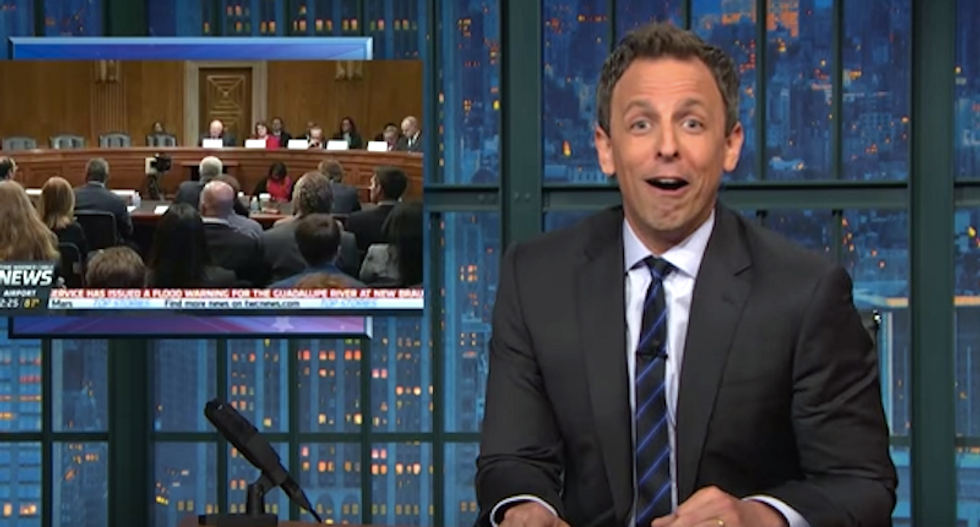 Pretty much nobody is happy with the U.S. Congress, where Republicans are refusing to hold hearings for President Barack Obama's Supreme Court nominee or fund efforts to fight the Zika virus.

Seth Meyers took a closer look at Congressional dysfunction Tuesday on "Late Night," where he pinned much of the blame on obstructionist GOP majorities in both the House and Senate.

Senate Democrats held mock hearings last week for Merrick Garland, who Obama tapped to replace the late Antonin Scalia, because the GOP majority is blocking his nomination in hopes that a Republican president might get elected and then nominate a conservative to the court.

"I actually think the Republicans in Congress might act like dicks just to see what sort of lame shit Democrats will pull to get back at them," Meyers said. "'Oh, look at this, our friends from across the aisle are holding mock hearings -- oh, no. I guess we better change our ways.'"

House Republican also shot down an LGBT anti-discrimination law by a single vote after some wrangling on the House floor, although video later showed that some votes changed after time had run out.

"Those numbers changing after the clock ran out is officially the most exciting thing that's ever happened on C-SPAN," Meyers said.

Democratic lawmakers chanted "shame" at their GOP colleagues, and Meyers joked that they even made House Speaker Paul Ryan walk through the Capitol naked.

"He was fine with it," Meyers said. "He's been working out his whole life for that moment."

"That's the way a parent yells through a closed door at a moody teenager," Meyers said. "'Todd! Todd! Todd! Your grandmother is downstairs! She is very old! Todd!'"

The most brazen recent act of stonewalling was GOP lawmakers' refusal to grant Obama's request for about $2 billion in funding to fight the spread of the deadly Zika virus, which can also cause devastating birth defects.

Obama slammed Republicans and their apparent presidential nominee, Donald Trump, saying the U.S. could not just build a wall to halt the virus because "mosquitos don't go through customs."

"I think we can count on a pretty steady stream of wallzingers from the president until he leaves office," Meyers said. "'I hear Donald Trump is going to build a mosquito wall -- and he's going to make the mosquitos pay for it.'"

The White House agreed to a GOP compromise, which allocated $1.1 billion to fight the virus -- although that wasn't quite enough to effectively stop its spread.

However, House Republicans passed a funding bill for only $600 million, which would be offset by cuts to the National Institutes of Health and efforts to combat the Ebola virus.

"Poor Ebola, used to be the hot, new thing, and now it's being pushed to the side by Zika," Meyers said. "Basically, Ebola is Bieber to Zika's One Direction."

"No one even questions it anymore," Meyers said. "The only time Congress ever gets covered on cable news is when it involves Donald Trump meeting with House Speaker Paul Ryan. Not only did cable devote wall-to-wall coverage of the meeting, they thought we cared what the buildings and cars looked like. You can't just peek in windows and make wild guesses based on facial expressions -- you're a journalist, not a peeping Tom."

Meyers then mocked Republicans for backing Trump -- who has said he can force Congress to agree to what he wants by grabbing, hugging and kissing individual lawmakers.

"Okay," Meyers said, "but be careful -- because that's also how Zika gets spread."

Watch the entire segment posted online by The Late Show with Seth Meyers: