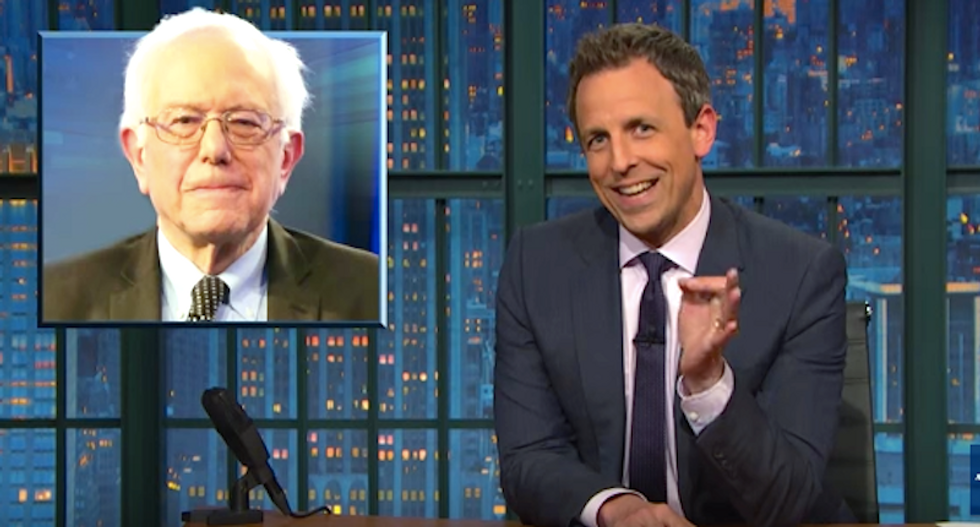 Sanders is still aggressively campaigning, even stopping at a high school prom to pose for photos with formally dressed students.

"What's the biggest Bernie Sanders accomplishment?" Meyers said. "That a democratic socialist has run such a successful campaign, or that it's now cool to take a picture at prom with a guy who looks like that. He looks like the bad guy in a prom movie on the Disney Channel: 'This year, no DJ!'"

Tensions have grown between the Democratic Party and the Sanders campaign, which has accused party leadership of trying to help Clinton by limiting debates and scheduling those at odd times.

Those tensions boiled over Saturday in Nevada, where unruly Sanders supporters were kicked out of a casino after they angrily protested the delegate allotment following Clinton's win the state's Democratic caucuses.

"We have a new least cool reason to be kicked out of a Vegas casino," Meyers said. "What happened? 'I was loudly debating rigged delegate allotments -- Vegas, baby!'"

Meyers set aside the merits of the dispute and said, flatly: "Caucuses are stupid, and every state should just hold a primary."

Many Democrats and other political observers are urging Sanders to end his campaign, comparing his potential as a spoiler to Ralph Nader -- who many believe siphoned votes away from Al Gore and helped George W. Bush win the 2000 election.

"The only thing he and Ralph Nader have in common is that neither of them own an iron," Meyers said.

Several TV commentators described Sanders as a "zombie candidate" this week, saying the senator's campaign was "dead" but continuing to "wreak havoc" in the Democratic primaries.

Meyers conceded that Clinton would likely win the nomination barring some massive upset, but he pointed out that the former First Lady, senator and Secretary of State faced a similar battle in 2008 against Barack Obama, who didn't lock up the nomination until after the last primary.

"We've heard a lot this year about the so-called 'Bernie or bust' movement, but in 2008 there was something similar going on with Hillary supporters who said they'd never back Obama," Meyers said. "Does any of this sound familiar?"

He played clips of Clinton supporters writing off Obama eight years ago, describing him as an elitist liberal who had hijacked the party with the help of Democratic leaders.

"In the end, fear of a John McCain presidency brought Democrats together, and as Hillary herself explained (Thursday) on CNN, a similar dynamic will play out this year," Meyers said.

Clinton explained that polls showed about 40 percent of her supporters said they would not vote for Obama in 2008, but many of them eventually did -- and she predicted that Democrats would rally around her in the same way this year.

"I think what brings us together is Donald Trump," Clinton said.

Meyers marveled at the possibility.

"That's right, Donald Trump can bring people together, even if they're not washed-up celebrities," Meyers said.