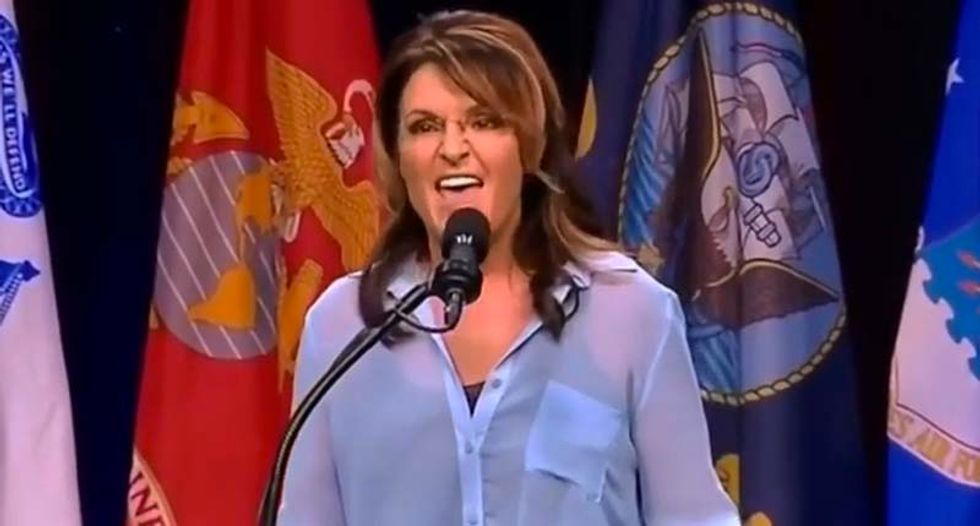 Attendees at Donald Trump's San Diego rally on Friday received an special treat when surprise speaker Sarah Palin showed up to wow the crowd with another one of her amped-up and rambling introductions for the probable GOP presidential nominee.

Taunting the assembled media members with 'suck it up, cupcake" -- because they supposedly believed Trump would not make it this far -- Palin bizarrely labeled Trump the "golden wrecking ball."

Pointing out that Trump is on course for the GOP nomination, Palin explained it as only Sarah Palin can.

"He in now though, he is now we the people's nominee," she yelled. "Suck it up, cupcake! No, see the pundits they are still so very confused. I guess they did not realize we meant what we said. When we said enough the status quo has got to go, the permanent political class has failed us."

"Trump came roaring in through this primary, and he blew the lid off the corrupted and corroded machine. He was like a golden wrecking ball," she added. "He wrecked what needed to be wrecked in order to shine light on the shenanigans, in order to allow us to rebuild because, see, Trump builds things. He builds big things. And with optimism. And with common sense. He solves problems!"

Taking a shot at President Obama's visit to Japan, Palin continued, "I want a president who inherently knows it weakens us showing up, Memorial Day weekend even! No! Instead of showing up somewhere to promise, hey when you mess with the innocent, you pick a fight with America, you steal our security, you spit on our freedoms, we’ll put a boot in your ass. It’s the American way!"

In a previous bizarre speech on behalf of Trump, the hosts of Morning Joe wondered if the Palin had "taken the bad acid."

Later after her speech, Palin was spotted in a local yogurt shop where she again used her "golden wrecking ball" nickname, adding that she thought Trump stood a good chance of winning the decidedly liberal -- and heavily Hispanic -- state.

"You know what is real cool and encouraging about California is absolutely there's a shot here in California," Palin explained. "People here, like across the country, are really fed up on the local, state and national level, fed up with just that status quo, that business as usual, that has us on a trajectory downward. And there's kind of like no light at the end of the tunnel if we just keep reelecting the same, so people are cognizant of that here in San Diego, because smart people are here. So here in California, I think Trump's going to win, and that would be spectacular. That would really be the golden wrecking ball, wouldn't it?"