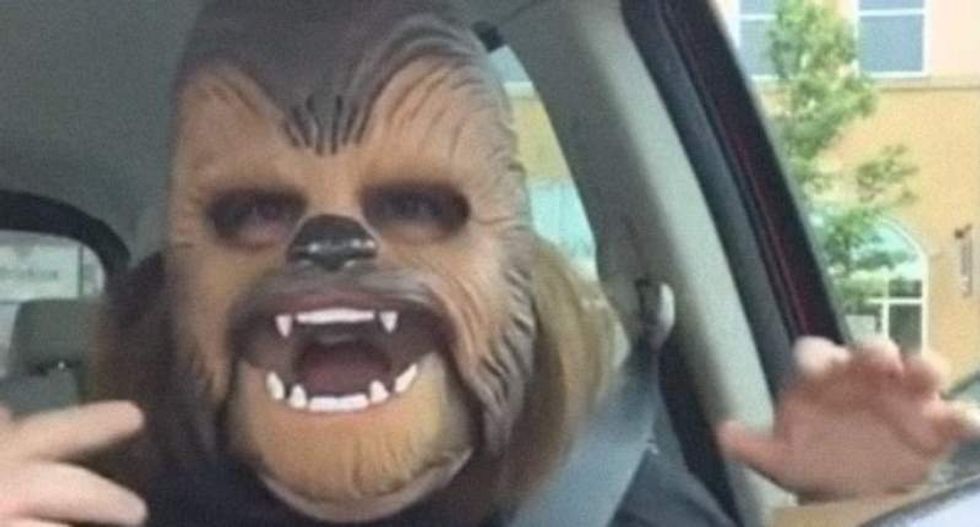 Candace Payne demonstrates her electric Chewbacca mask in a video posted on May 20, 2016. (YouTube)

A Texas woman found fame this week after filming a Facebook Live video of herself in an electronic Chewbacca mask that racked up over 50 million views in less than 24 hours.

Candace Payne recorded the video in a department store parking lot on Thursday.

Chewbacca is a fictional character from the "Star Wars" movie series and adventurer Han Solo's sidekick.

The mask emits a guttural sort of whine, characteristic of Wookiees, that Payne triggered when she opened her mouth.

"I'm such a happy Chewbacca!" Payne exclaims, while laughing. "This is worth every penny!"

"Chewbacca" began trending on Twitter in the United States on Friday, with users of the social media platform cheering the video.

"If you haven't seen the Chewbacca mask lady video yet, you are missing out on a few minutes of pure joy," tweeted ¡Gabe! Ortíz ‏(@TUSK81).

"Can we all agree that this​​ ​reaction to a ​​Chewbacca mask is everything?" tweeted Kohl's (@Kohls), where Payne said she bought the mask.

A Kohl's spokeswoman said the Chewbacca mask has sold out online.

"Thanks for all the feels, Internet webs," Payne wrote. "I mean it."

Watch footage of Payne's reaction to the mask, as posted online on Friday, below.