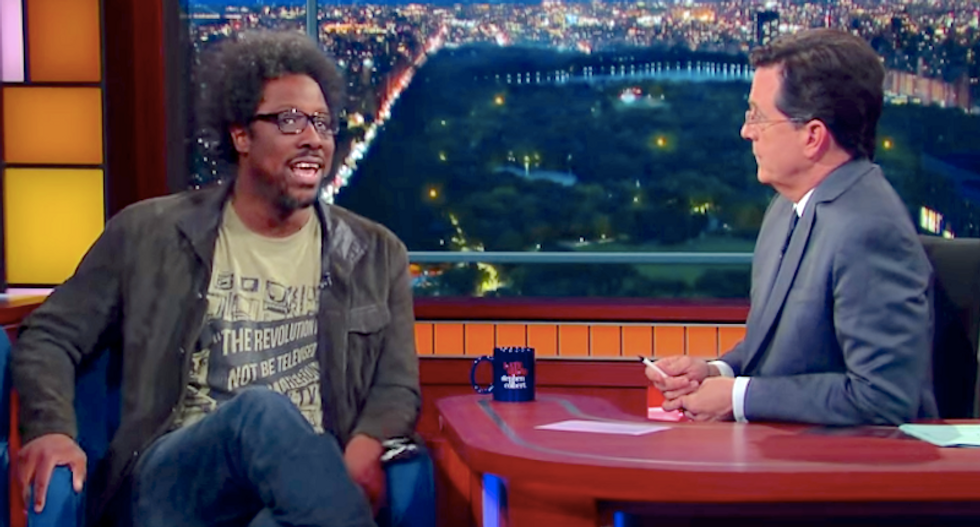 Comedian and CNN host W. Kamau Bell explained why black Americans can't really be racist, and Stephen Colbert asked him what he thought of Larry Wilmore's use of a racial slur toward the president.

Bell, whose "United Shades of America" program premiered last week on CNN, appeared Thursday night on "The Late Show with Stephen Colbert," where the host asked him to describe the most racist thing that white people do without thinking it's racist.

"The most racist thing people do without realizing is the following, starting a sentence like this: 'I'm not racist, but,'" Bell said. "The minute you try to pretend, especially as a white person in this country, to pretend like you're not actually benefitting from racism and white supremacy, the minute you try to except yourself from that, you're leaning into racism."

Colbert the asked, after joking that he's not racist himself, whether black Americans engaged in racist behavior.

"Here's the thing: When you say the word 'racism,' a lot of people who are way smarter than me -- like Cornell West, the guy I try to look like -- academics, they don't believe you can be racist if you're a person of color, if you're a black person," Bell said. "We can be prejudiced, but racism implies power and institutions behind it. I can be prejudiced, I can be like, 'I don't like white people,' but I can't, like, not hire them or not give them their voting rights -- you know what I'm saying? So it's a very different thing."

Colbert then asked Bell what he thought of Wilmore's monologue Saturday at the White House Correspondents' Dinner, which he ended with a racial slur directed at President Barack Obama.

"I like Larry Wilmore, (and) I think he was playing to the people at home, which I think you may know about that experience at the White House Correspondents' Dinner," Bell said, referring to Colbert's own controversial monologue 10 years ago. "You either play to the people in the room, or you play to the people at home. I didn't appreciate all the CNN jokes -- that's my new network. He said he remembers when CNN used to be a news network, and I feel like that's a shot at me -- and I just want to say I remember when the show that followed 'The Daily Show' used to be funny."

"'Tough Crowd with Colin Quinn' was a very funny show," Colbert joked, referring to the program that aired in that time slot before his "Colbert Report" debuted in 2005.

Watch the entire interview posted online by The Late Show With Stephen Colbert: