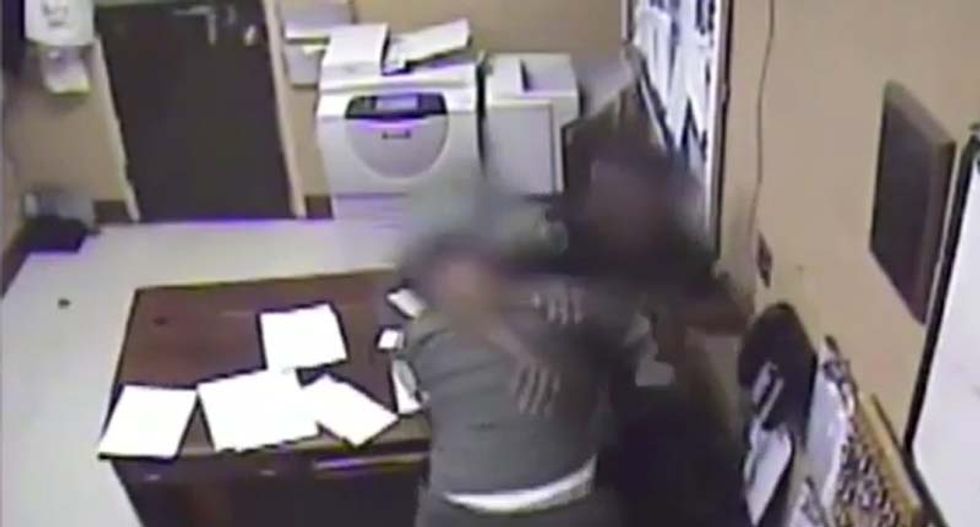 As part of an effort to call attention to jail under-staffing -- leading to 12-hour shifts -- the warden of the Mobile County Jail released dramatic video of an inmate bursting into an office and attacking a lone guard after locking the door so no one could help.

According to AL.com, the incident took place in January of 2015 when an inmate, who was not previously thought to be dangerous, wandered an empty hallway before seeing the corrections officer sitting alone at his desk.

The unidentified inmate then ran into the room, slamming an automatically locking door behind him before he assaulted the officer, coming away with either his Taser or handgun.

Using edits showing the hallway, another officer can be seen trying to provide assistance only to have to fumble for his keys before helping to subdue the now-armed assailant.

According to jail Warden Noah Price Oliver, the attack was "sort of the straw that broke the camel's back."

The warden explained that their inability to hang onto experienced correctional employees has made it dangerous for current employees facing hostile inmates.

"We were losing employees on a regular basis, on a monthly basis, and we would do exit interviews and there was one common denominator and that was the hostile work environment. And of course that's understandable because it is a jail," Oliver explained. "So we identified some ways that we can make it safer and less stressful on our employees."

According to the warden, there were 44 incidents in 2015 where correctional personnel had to use force against an inmate. Almost a half year into 2016, those incidents have plummeted to 13.

"Last year we had 17 assaults on officers and this year so far we've had zero," he stated, "so we are ecstatic about the results of these policy changes."

Among the changes are creating cool down periods for inmates, allowing officers to take much needed breaks as well as get caught up with their paperwork. Additionally inmates are no longer allowed to freely roam hallways and must be escorted while restrained -- something previously limited to inmates who have a history of violence and exhibit mental illness.

According to Oliver, the jail is still understaffed -- with between 240 and 250 employees handling approximately 1,100 inmates -- but incidents have substantially decreased with the new safety measures.