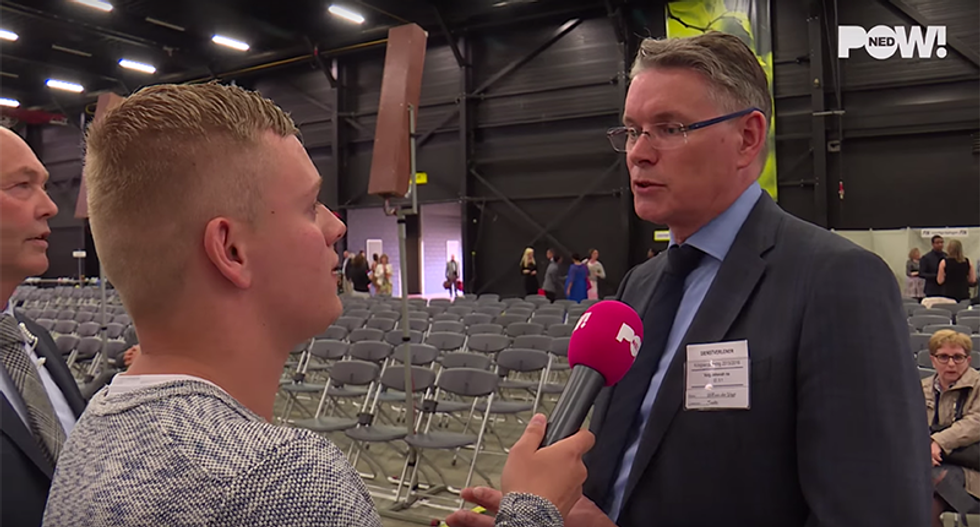 Jehovah's Witnesses enraged the internet with its latest video brainwashing children against their same-sex parents. So, it isn't unreasonable that a Dutch reporter would attend their international convention and ask questions about it. Once they realized he was making fun of things, he was kicked out, according to Patheos.

Despite being an "open" event, the POWNed journalist was shown the door after asking event spokesperson Herman Maijer if homosexuals were welcome to attend.

"Sure, sure, no problem" a rough translation of what Maijer said when asked if anyone could attend. "In theory, everyone is warmly invited." In practice, it might be something else. "We have sympathy for all kinds of people, homosexuals included." He explained that the objections the church has are with the "behavior" of homosexuals and he believes they should change who they are. "There seems to be a possibility that someone can do what's necessary to conquer those feelings."

The reporter walked around interviewing others who talked about the video and LGBT people saying that it isn't what God intended and against God. One young man rationalized, "Because you give yourself to God, you can control yourself."

An older gentleman got a little graphic when thinking about homosexual sex, "Now, penetrating someone, to express it very crudely... No! There will be a certain number born with this anomaly, but that doesn't mean you have to practice it.

Not long into the interviews, the film crew was told they were generating turmoil and the "implied invitation is hereby revoked. So, you are no longer welcome here," a Jehovah’s Witnesses official said.

Watch the full video below (subtitled version below this):

Here it is with subtitles ala Josh Cedars: