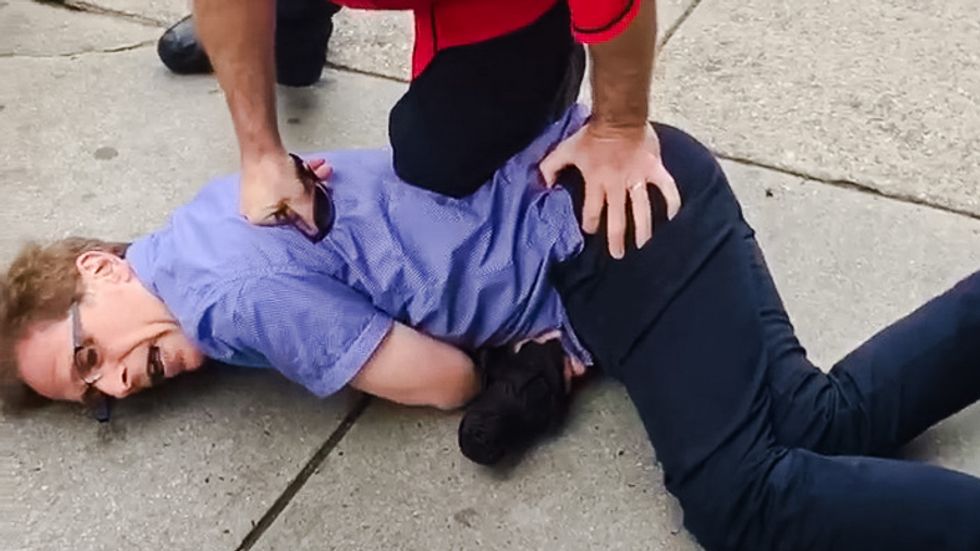 A Boston Police officer is reportedly under investigation after he was caught on video pinning a pedestrian to the ground while off duty.

Video posted to Facebook by Stephen Harlowe this week shows the off-duty officer, who is wearing a Red Sox jersey, with his knee in the back of a man who is face down on the sidewalk. The officer can be heard telling the man that he's "under arrest right now."

As the officer pulls the man down the street by his collar, the man explains that the officer cut him off while he was using a crosswalk.

"I tapped his [vehicle's] glass with my umbrella," the man says.

"And you tackled him and shoved his head into the ground?" Harlowe asks the officer, repeatedly asking to see a badge.

Harlowe briefly spars with the officer over whether drivers must yield to pedestrians. And although the officer claims that the man "cracked" his glass, Harlow observes that the mark is simply a "smudge, not a crack."

Within minutes, police backup arrives and the video ends.

Harlowe later told NECN that the officer "acted like [the man] had shot somebody."

"It was very uncalled for, it was completely unnecessary," he said.

Boston Police confirmed in a statement that the department was aware of the video.

"It has been turned over to the internal affairs division who has initiated an inquiry," the statement said. "This inquiry will including speaking to the officer and attempting to contact witnesses and parties involved."

"We're going to wait and see what happens with internal affairs before we take any action, before I make any further comment on it."

According to the Boston Police Department, the man who was tackled in the video was never arrested.