Watch the first test of 'Hyperloop' that could ferry passengers between L.A. and San Francisco 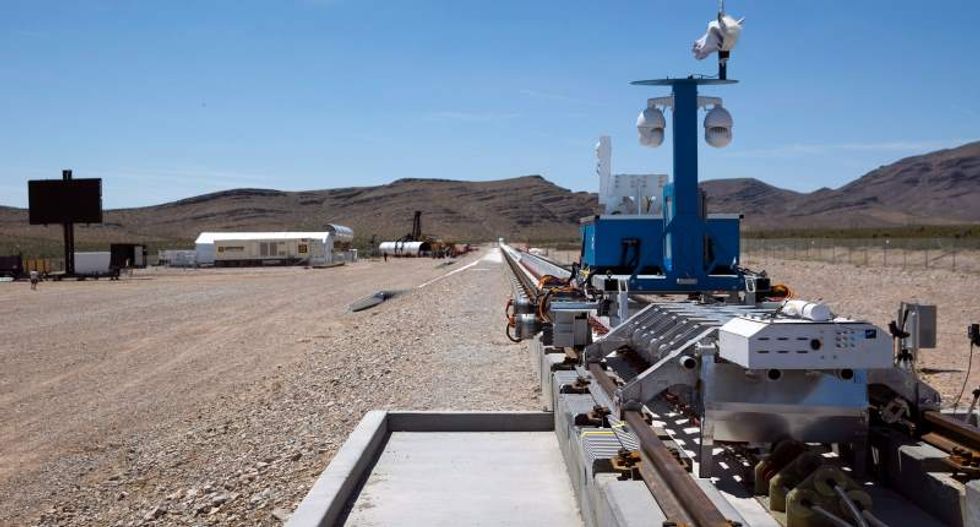 A silver-colored sled and recovery vehicle are displayed on a test track after a propulsion open-air test at Hyperloop One in North Las Vegas, Nevada, on May 11, 2016. (Reuters/Steve Marcus)

A car-sized sled powered by electromagnets rocketed to more than 100 miles (160 kph) an hour through the Nevada desert on Wednesday in what the Los Angeles company developing the technology said was the first successful test of a futurist transit system called hyperloop.

Hyperloop One is among several companies competing to bring to life a technical vision by Elon Musk, the founder of rocket maker SpaceX and electric car company Tesla Motors, who suggested sending pods holding passengers and cargo inside giant vacuum tubes between Los Angeles and San Francisco.

It's a matter of debate how soon – or whether – passengers and cargo will ride the system at velocities approaching 750 miles per hour (1,200 kph), but Hyperloop One already has raised $80 million from backers including clean technology venture capitalist Khosla Ventures; high-speed railway SNCF, the French National Rail Company; and GE Ventures.

Brogan BamBrogan, a former SpaceX engineer who co-founded Hyperloop One, called the test a major milestone.

"Technology development testing can be a tricky beast," he said to a crowd of 300. "You never know on a given day if things are going to work exactly like you want."

The sled began on a train track and then was rocketed to 105 miles per hour by electromagnets as electricity was shot into copper coils. After a short ride, the sled ran into a sand trap, sending out silicon sprays. If all goes according to plan, sleds will levitate and carry pods in a test later this year. Gigantic tubes already are scattered around the Las Vegas area test site.

Company Chief Executive Rob Lloyd on Wednesday forecast a hyperloop would transport cargo by 2019 and passengers by 2021.

Musk created a stir by saying California could build a hyperloop from San Francisco to Los Angeles for around $6 billion, a 10th of the cost of the state's high-speed rail project.

Skeptics say real-world challenges ranging from construction permits to making the new technology work mean the costs are likely to be far greater.

"The hyperloop might be promising, but it's still unproven and just an idea. High-speed rail is a proven technology that's been in use around the world for decades," said Lisa Marie Alley, a spokeswoman with the California High Speed Rail Authority.

A hyperloop, she said, will run into the same challenges of any other large infrastructure project, including funding, right of way, environmental permits, approvals and clearances. "None of it is easy," she said.

Alon Levy, a mathematician who writes about mass transit for the blog Pedestrian Observations, said the cost estimates from hyperloop backers do not fully take into account difficulties such as engineering turns at jet speed or even digging tunnels.

"I do think Hyperloop can be built. But making it work requires much more money than the builders think, and much more than conventional high-speed rail," he said.

Watch the test, as posted online by C-NET, below.