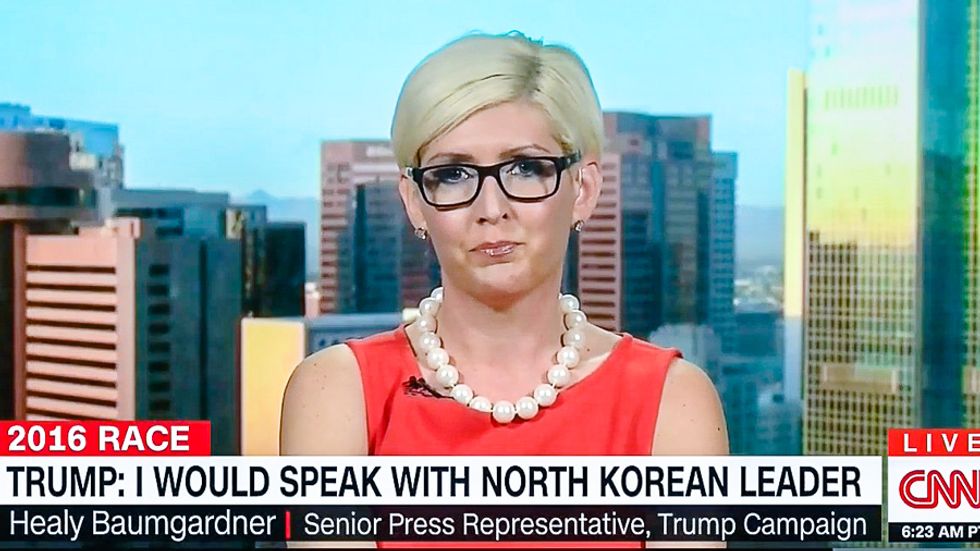 Trump campaign spokesperson Healy Baumgardner really can't catch a break. A little more than a week after her last utterly disastrous appearance on CNN, Baumgardner was back on today to explain her boss's positions on issues such as temporarily banning all Muslims from entering the U.S. and whether he would have a debate with Democratic presidential hopeful Bernie Sanders.

"Is there going to be a Donald Trump-Bernie Sanders debate?" asked CNN's John Berman, via Mediaite.

"I wish I could tell you, I'm not a political fortune teller, so I can't answer that unfortunately," she replied.

When pressed on how she could possibly not know the intentions of the candidate whom she represents, she replied that "only Mr. Trump speaks for Mr. Trump," which seems to suggest that having her on the campaign's payroll is utterly pointless.

Berman then asked Baumgardner to ask about whether Trump would really soften his proposal to ban all Muslims from entering the United States.

"I'm not sure, I can't really answer that at this point," she replied. "That's something we'll sit down and develop more specifically, as well as the other issues that Mr. Trump looks forward to addressing, and we'll be talking about this more specifically on the campaign trail moving forward."

After this, Baumgardner was asked to remark on Trump campaign chairman Paul Manafort's comments that picking a woman or a minority for Trump's vice president would be seen as "pandering." Baumgardner said that she couldn't possibly comment on Manafort because she wasn't there when he said it and couldn't speculate on what he meant.

At this point, CNN's Kate Bolduan got a little incredulous.

"Again, you represent the Donald Trump campaign," Bolduan said as Baumgardner's eyes bulged in an expression of abject terror.

"I do represent the Donald Trump campaign, you're 100% correct," she replied. "However, I cannot speculate based on another person who works for the campaign's remarks and what they meant by those."

Watch the entire train wreck below.