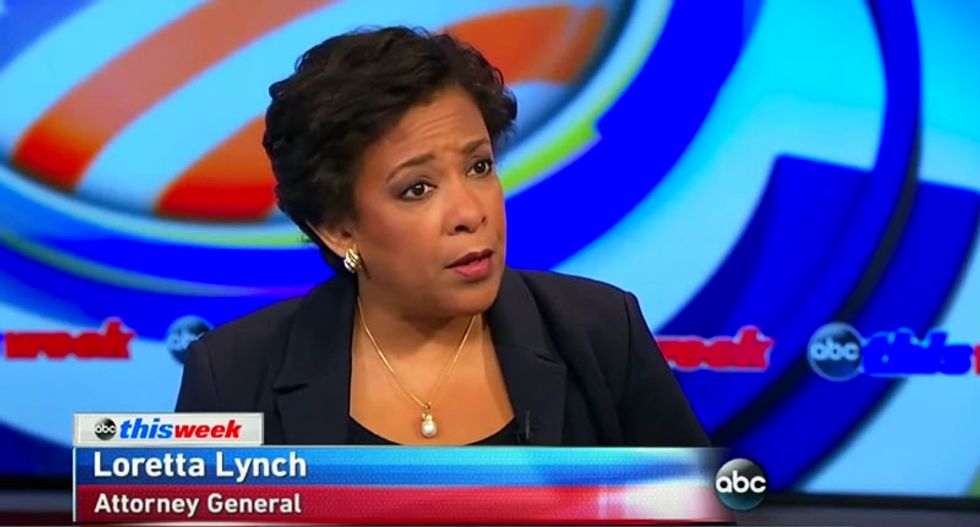 Among the many topics discussed after the shooting were reports that a gun shop owner notified the FBI that shooter Omar Mateen had come in and attempted to buy body armor, leading the shop owner to grow suspicious.

"Of all the things that we have learned, the FBI has acknowledged, that people at this gun shop in Jensen Beach, Florida, warned FBI agents that somebody had been in there, somebody who we now know would become the killer in Orlando, had tried to buy body armor, was acting suspiciously," host Jonathan Karl pressed. "Did the FBI do enough to follow up on that tip? This is the person -- this is -- this is the killer?"

According to Lynch, the FBI contacted the gun shop but were unable to get any "identifying information" about the would-be purchaser.

"But did they do anything with that information?" Karl asked.

Lynch replied that "it wasn't until this tragic events of last weekend that the gun shop owner realized, oh my goodness, that was the man that came in," which led to identifying Mateen.

Karl also asked why the FBI had done nothing after meeting with the shooter twice before.

"He was under investigation himself for his own statements, and that investigation took some time. And at the time, the FBI did everything it could to see was he about to carry out anything. This was about two years ago," she parried. "And I can assure you that had he indicated he was going to take action, that they would have stayed on that investigation. They determined that he was at the time making statements."

"He then came on the radar again in the context of another investigation, another Florida man who traveled to Syria, blown himself up, in connection with a suicide bombing attempt, had a connection to the killer," she continued. "And so he was interviewed along with other people who knew that other individual, and determined what connections he had and if he himself was predisposed to leave the country and commit the same kind of act. It was determined that he was not predisposed to do, that he didn't give any indications at that time."

Lynch also stated that the Justice Department would be releasing transcripts of conversations between Mateen and hostage negotiators this week, where the shooter discussed his political views.