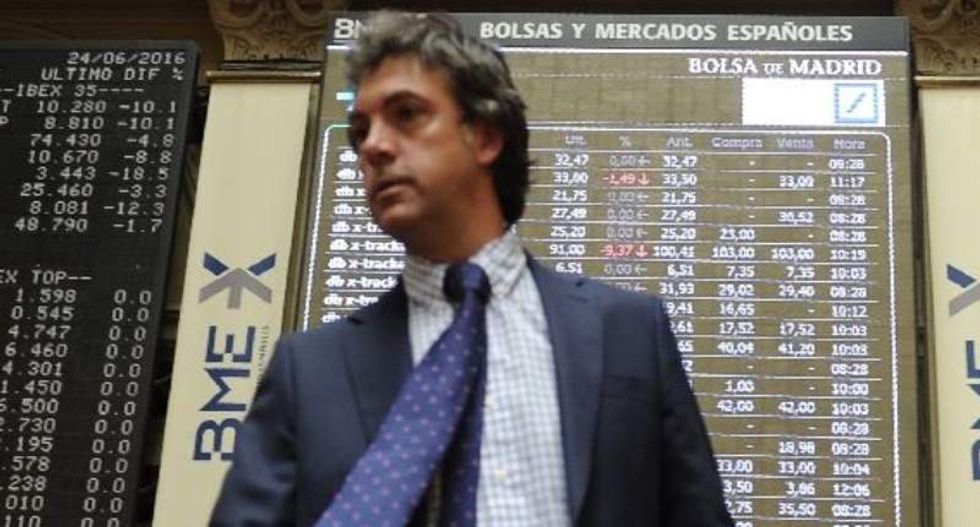 Britain's shock vote to pull out of the European Union wiped $2.1 trillion from global equity markets Friday as traders panicked in the face of a new threat to the global economy.

Investors fled to the safety of gold, the yen and blue-chip bonds as the seismic shift in the structure of Europe left many huge questions hanging, including who will lead Britain following the resignation of Prime Minister David Cameron.

The Brexit vote sparked eight percent losses in the Tokyo and Paris bourses, nearly seven percent in Frankfurt and more than three percent in London and New York.

Central banks stepped in to bolster confidence, promising to inject liquidity where needed and appearing to mitigate some of the sharpest losses.

Still, the pound crashed 10 percent to a 31-year low at one point, before rebounding slightly for a 9.1 percent loss against the greenback in late trade.

The euro also plummeted, dropping 2.6 percent on the dollar.

Benefitting from a massive safety selloff, gold jumped nearly five percent and the yen surged 4.2 percent against the dollar and 7.0 percent on the euro. The dollar at one point fell below 100 yen for the first time since November 2013.

US 10-year treasury bond yields hit their lowest since 2012 at 1.42 percent before edging higher, while the German 10-year bund fell into negative territory for the second time in history.

Analysts say the split of Britain with the EU could slow trade and investment in the country and hit its key financial industry, possibly pushing the economy into recession.

The extent of the market damage across Asia, Europe and the Americas attested to how wrong investors were to bid up prices ahead of the referendum, convinced Britons would vote to remain part of the 28-nation European Union.

"It is clear that the broader markets went into this critical vote with too much comfort," echoed George Goncalves of Nomura Securities.

The losses were of a magnitude unseen since the dark days of the global economic crisis.

In all $2.1 trillion in value was wiped off of equities worldwide, according to S&P Dow Jones Indices.

"The liquidity support promised by the Bank of England -- and subsequently the ECB and Federal Reserve -- appears to have been the main catalyst for the turnaround," said Spreadex analyst Connor Campbell.

Milan slumped 12.5 percent, and Madrid lost 12.4 percent on jitters ahead of Spanish elections on Sunday.

With London's claim to the world's leading finance center on the line with the EU divorce, banks were heavily sold Friday. Many global banks say they expect to relocate staff to elsewhere in the European Union in anticipation of the breakup.

The travel industry was also battered by worries that the Britain-EU divorce will hit business. Hotels, travel agencies and airlines all fell sharply, with Air France down 10.0 percent, Lufthansa 9.2 percent and American Airlines 10.8 percent.