CNN's Chris Cuomo nails Rudy Giuliani on his Islamophobia: Why would you give ISIS what they want? 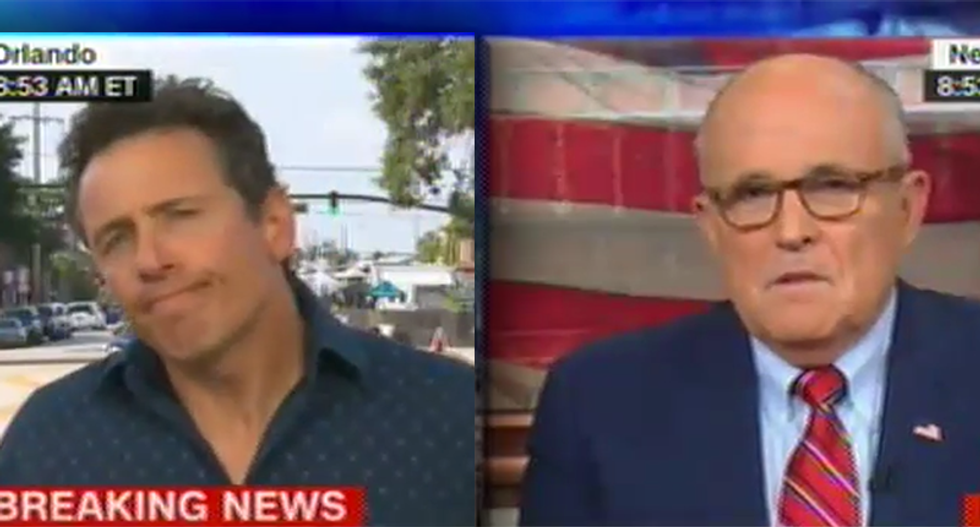 Former New York Mayor Rudy Giuliani equated Mitch McConnell's resistance to say the word "gay" when talking about the people targeted by the Orlando shooter to President Barack Obama not using the phrase "radical Islamic terrorism" instead of using the word "terrorist" and "acts of terror" he used Sunday.

"Calling this gay and not using that word and not running away from it because of some sense of identity politics is wrong and you agree with that," CNN host Chris Cuomo said, trying to unpack Giuliani's statement. "Saying 'radical Islamic terror' ... you used an analogy, let me reverse it on you. If every time the mafia made a killing or a murder, they said 'well, those Italians, well there's something about 'em, and the mob. There's something about the Giuliani and the Cuomo.' How would you have felt? You would have been disgusted. It's one of the things that motivated you as a prosecutor to distinguish the mafia from the rest of the Italians. That is the same point, is it not? That you can't talk about all of Islam you talk about these perversions."

Giuliani disagreed, saying it wasn't the same thing. He said that he uses the words "radical Islamic Muslims" and when he uses the word "mafia" he doesn't mean all Italians.

"But if you said 'radical Italian murders,'" Cuomo said, shrugging as Giuliani struggled to find a way to explain himself.

"They call themselves the Islamic State," Giuliani responded.

"They do because they want the credit of owning the religion," Cuomo explained the strategy behind ISIS attempting to take over Islam on behalf of terrorists. "They want that. Why would you give them what they want?"

Giuliani pivoted to simply blame President Obama and revert to Donald Trump's talking points. He claimed that not using tough language like "radical Islamic terrorism" has resulted in four attacks in the last year. "The weaker you are, the harder they hit you," he said, but did not clarify if his use of the phrase did or did not contribute to 9/11.

"I think there's some politics being played with this," Cuomo called out. "With Donald Trump coming out and seeming to suggest that President Obama has some sympathy, some compromise personally that doesn't keep him from being tough. With all the troops, with taking out OBL, I mean, it just doesn't seem like the right kind of rhetoric. I don't think if you were running you would ever suggest anything like that about a Commander in Chief."

Giuliani then blamed Obama for the attacks on San Bernardino, saying it was his rhetoric that prevented people from turning the shooter into authorities in the days leading up to the shooting. "He's creating a feeling, particularly among, maybe more liberal members of this society you can't say 'Islamic terrorism.'"

Cuomo cited Hillary Clinton who said, Monday in her speech, prior to Trump's speech, that she has no problem using the words but Giuliani claimed she used the phrase only after Trump harassed her about it.