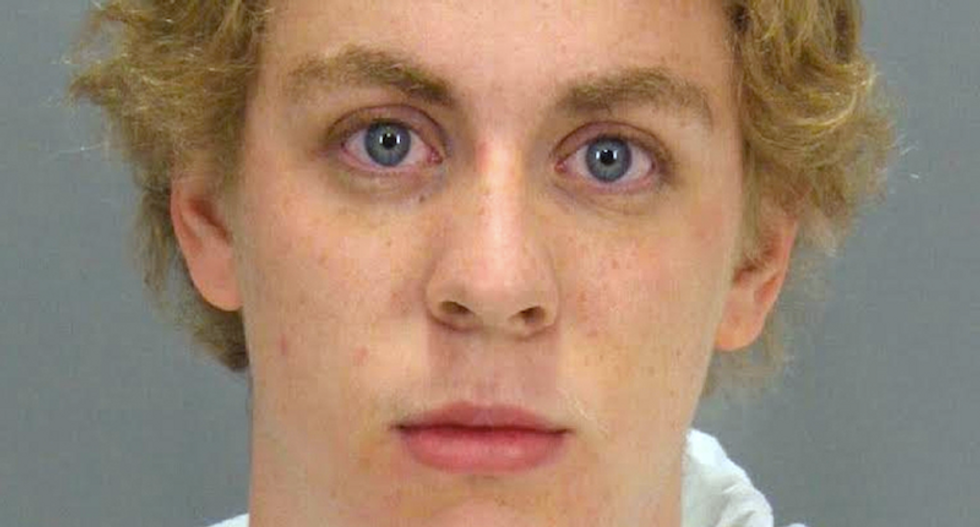 To prosecutors, Brock Turner represented “the face of sexual assault.” To Michael E. Miller of the Washington Post, he was “an all-American swimmer” with a “once-promising future” whose “life and career were upended during a night of drinking.”

Last Wednesday, Turner was found guilty of three felony counts, including assault with intent to rape an intoxicated woman and sexually penetrating an unconscious person with a foreign object.

Judge Aaron Persky, a former sex crimes prosecutor who ran on a tough-on-rape platform, sentenced Turner to a mere six months in jail, insisting “a prison sentence would have a severe impact on” the defendant. This came after the victim of the assault read a deeply moving letter into the record about how it impacted her.

Persky, reputed to be a Standford grad, is a rape apologist.

Turner’s dad, Dan A. Turner, offered a defense of his son’s actions. In a letter to Judge Persky he wrote his son’s “life will never be the one that he dreamed about and worked so hard to achieve. That is a steep price to pay for 20 minutes of action out of his 20 plus years of life.”

Dan A. Turner, who provided a crystal clear glimpse into how his son might have come by his ideas about women, is a rape apologist.

And so is the Post’s Miller, who offered an incredible writeup of Turner’s life, his accomplishments, his dreams, and his “night of drinking.” If you ever wanted to read what a rape apologist sounds like, look no further than the headline:

The reaction was swift and unforgiving. Commenters were incredulous that the Post’s approach invoked Turner’s accomplished swim career when, as Reuters reporter Patricia Zengerle put it, “the salient point here is that he’s her convicted rapist, not that he swims.”

And the content wasn’t any better than the headline. The writeup dedicated over 10 paragraphs to Turner’s “extraordinary yet brief swimming career,” as well as his continuing hopes to one day become a surgeon despite his conviction.

The Post also took heat for using photos of Turner suited up and smiling, as opposed to pressing police for his mugshot. The Santa Clara County Sheriff’s Office did not release Turner’s mugshot until Monday afternoon, following an onslaught of social media criticism pointing out the hypocrisy of the media’s portrayal of Turner versus other high-profile cases.

Hey @washingtonpost could you use #brockturner 's mug shot and not his swimming portrait or some other Glamour Shot - he's a rapist.
— Jaime Primak (@Jaime Primak) 1465262584.0

Pic on the left is what media's used for rapist Brock Turner. Pic on the right is his actual mugshot... @ggreenwald https://t.co/GArhVXEpYp
— Trita Parsi (@Trita Parsi) 1465306634.0

The Washington Post article is particularly disconcerting when compared with the victim’s impact statement, which the unnamed 22-year-old submitted to Buzzfeed after Turner’s sentencing. In it, the victim laments the media’s portrayal of Turner throughout the trial:

“And then, at the bottom of the article, after I learned about the graphic details of my own sexual assault, the article listed his swimming times. She was found breathing, unresponsive with her underwear six inches away from her bare stomach curled in fetal position. By the way, he’s really good at swimming. Throw in my mile time if that’s what we’re doing. I’m good at cooking, put that in there, I think the end is where you list your extracurriculars to cancel out all the sickening things that’ve happened.”

This is exactly what the Washington Post and several other news outlets did: listed his swim times and his accomplishments before discussing the negative impact being a convicted rapist will have on Turner’s once-promising future. It’s a harrowing example of the many ways our culture perpetuates rape culture. By focusing on Turner’s life being “destroyed” because he sexually assaulted an unconscious woman behind a dumpster, news outlets are sending the absolute wrong message.

In contrast, CNN's Ashleigh Banfield dedicated over 40 minutes to reading the victim's impact statement. The powerful segment proved, as Media Matters for America points out, there's "a better way" to report on sexual assault cases.

The Washington Post focused on how a rape conviction would effect the life of the rapist; CNN showed a better way. https://t.co/blvPTl0nYn
— Media Matters (@Media Matters) 1465303266.0