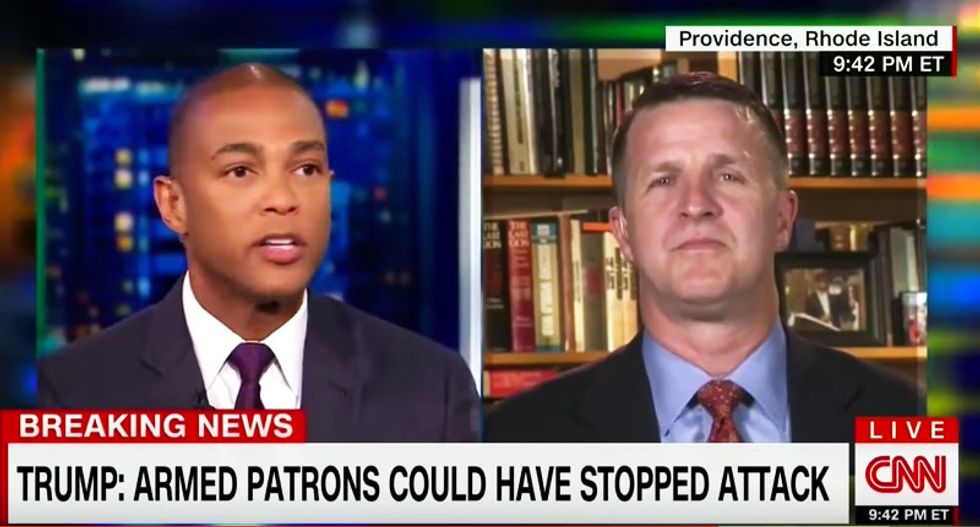 CNN's Don Lemon took a Donald Trump supporter to task Friday night who seemed more concerned with the politicization of the Orlando mass shooting than with the victims and survivors.

After showing a clip of Trump's inflammatory speech in Texas railing at the "son-of-a-bitch" who shot up the Pulse nightclub in Orlando, Lemon asked Ken McKay of the Rebuilding America Now PAC, if Trump was being "insensitive," while the country is still reeling from the mass shooting.

McKay disagreed before attacking Democrats for their “disgustingly political” reaction to the shooting by seeking stricter gun control laws.

"They made sure to blame this tragedy on gun owners of America quicker than they blamed the Benghazi attack on terrorists,"McKay said.

"I have to tell you it's not just Democrats who are saying there needs to be some sensible restrictions on some kinds of guns, it's also Republicans," Lemon replied, talking over McKay. "It's also independents, it's also reasonable people, and what the families say is 'we're tired of political talking points.' Republican families, Democratic families, independent families, who are, all of them, every family I spoke to said they are pro-Second Amendment and that they are tired of this whole gun thing being politicized, and , quite frankly they thought that Donald Trump was politicizing it."

Lemon then went on to talk about the pain suffered by the families of victims.

“Some people may get upset with me," Lemon began, "but every time I go to one of these things and I sit with families who have lost loved ones and they staring me in the eyes and they’re crying and I see women, the mothers, who cannot stop moving, they're so jittery, and they hadn't slept, and they’re telling me that they cannot sleep at night, they cannot do anything, they’re tired of turning on the television and hearing people bickering about left vs right when it comes to guns. They don’t care if it was a terrorist act! They don’t care if it was an act of hate. They don’t care what it is, their loved one is dead and they want something done about it! The one thing they say, the commonality in these shootings is the type of weapon used."

A somewhat less belligerent McKay stated, "That's not the question you asked me," before once again claiming he didn't believe Trump was using the mass shooting for political purposes.