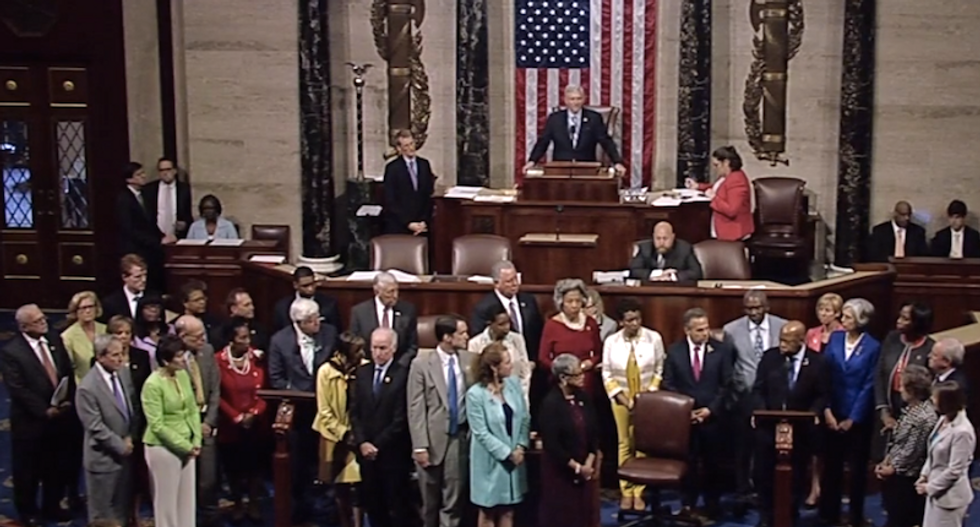 Republicans shut down cameras inside the U.S. House of Representatives to prevent Americans from seeing a sit-in by the Democratic colleagues to force a vote on gun control.

"We have been too quiet for too long," Lewis said. "There comes a time when you have to say something. You have to make a little noise. You have to move your feet. This is the time."

Lewis and about 60 Democrats sat down, and Rep. James Clyburn (D-SC) led a prayer on the House floor.

My colleagues & I have had enough. We are sitting-in on the House Floor until we get a vote to address gun violence. https://t.co/rTqrPifuUz
— John Lewis (@John Lewis) 1466610492.0

Sen. Chris Murphy (D-CT), who led a filibuster in the Senate last week that forced votes on gun measures, which Republicans shut down, showed his support by coming into the House chamber.

They briefly stood up for the Pledge of Allegiance but sat back down, chanting, "no bill, no break."

Then Rep. Ted Poe (R-TX) called a recess, saying the House was not in a state of order, and the cameras were shut off.

Rep. Karen Bass (D-CA) that House Democrats staged the sit-in because GOP leadership would not allow Clyburn to speak about the proposed legislation.

"If you are constantly shut down, if if your voice cannot be heard, then it's time to take extraordinary measures," Bass told MSNBC.

She blamed the NRA Republican inaction on gun measures in the wake of the deadly mass shooting in Orlando.

"I think the NRA's influence is very profound," Bass said. "A lot of times, people think of it as an individual campaign contribution, (but) that's not the issue. The issue is the fact that for a lot of members, if they do not have an 'A' from the NRA, they're concerned about the NRA running campaigns against them, supporting their opponents or running independent expenditure campaigns against them. That's the fear."

Watch Republicans shut down the sit-in: