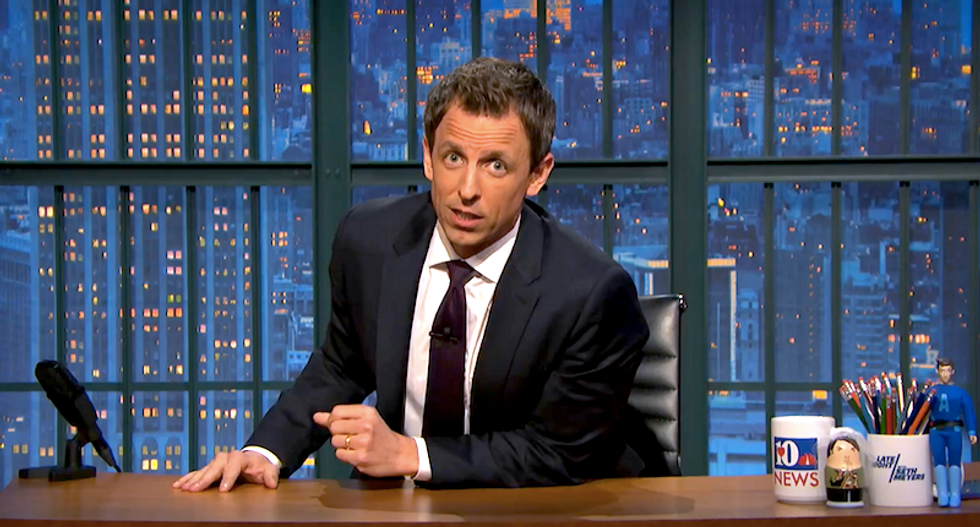 One of the greatest legacies Jon Stewart's "Daily Show" left us was the almost daily segments calling out, what Stewart labeled, bullsh*t.

"So I say to you tonight, friends. The best defense against bullsh*t is vigilance. So if you smell something, say something," Stewart said closing his final show.

While former "Daily Show" correspondents Samantha Bee and John Oliver have taken that instruction to the bank, their acclaimed shows only air once a week. This leaves the public with four days each week where bullsh*t too often goes unchallenged by journalists and cable news outlets responsible for holding bullsh*t responsible. Particularly when it comes to Fox News, which Stewart was famous for challenging. While Larry Wilmore's "Nightly Show" occasionally strikes back at the right-leaning network, no late-night shows have picked up the banner of duty and accountability to the extent Stewart did.

But, as we swim deeper into the bowels of the 2016 election, one late-night host has begun to emerge as a genius bullsh*t detector: Seth Meyers.

His "Closer Look" segment, which airs almost nightly, is reminiscent of Oliver's final spotlight segment that deals with a complex issue each week. However, Meyers looks at the daily cistern of bullsh*t and obliterates the source, while Oliver tends to focus on in-depth examinations of the system and the ways in which it is unfairly harming specific people.

Meyers' feud with Trump dates back to the 2011 White House Correspondent's dinner when Meyers called Trump "a joke" to his face.

“Donald Trump has been saying that he will run for president as a Republican,” Meyers said. “Which is surprising because I just assumed he was running as a joke.”

Trump trolled Meyers in 2014 on Twitter while Meyers hosted the Emmy Awards. Now Meyers has banned Trump from ever coming on his show. He even mocked other late-night programs that do funny gimmicks while interviewing serious people, some of which are on his own network.

Meyers loses press because his YouTube videos don't go as viral the following day as those who force guests into more humiliating games and parlor tricks. Instead, he relies on an intelligent, politically astute audience who demands he ask real questions to presidential candidates he interviews. In the two years that he has been on the air, Meyers proved he will continue to embed the dry wit SNL's "Weekend Update" had, but he's not above throwing in a little schtick and challenging a crack graphics team.

Like Stewart's "Daily Show," people can now tune into Meyers' "Late Show" and catch up on the news in a casual and funny way. Whether it makes the ratings the network wants or not, Meyers doesn't just make jokes, he makes a point, and it is quickly rising to the level of Stewart quality.