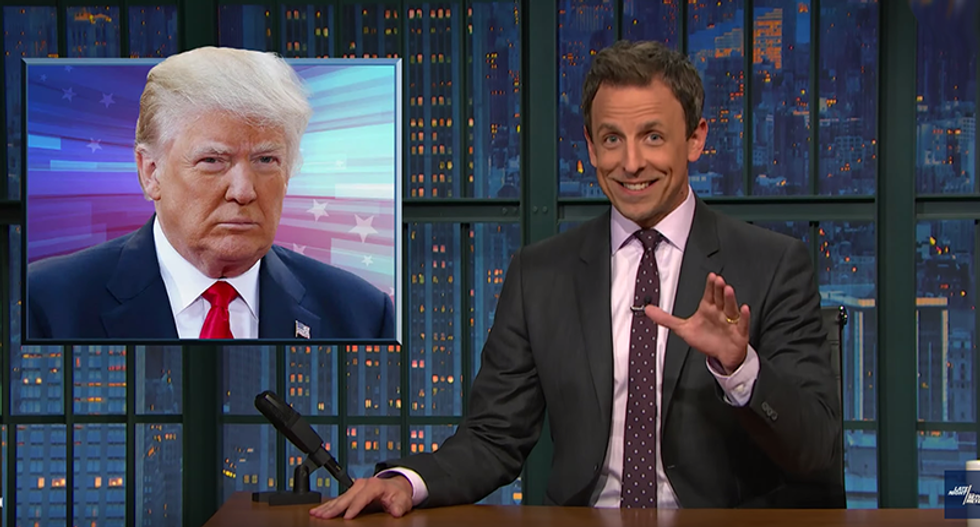 Just when you thought Donald Trump couldn't possibly get worse, he did. The RNC reportedly told Trump to give condolences and then shut up, but that was clearly ignored. Now, Republicans are quickly understanding that anything would have been better than what Trump has said in the wake of the Orlando shooting.

Seth Meyers said Tuesday evening on "Late Night" that Trump is like if Joseph McCarthy was exposed to gamma radiation and became a racist orange Hulk with tiny hands.

Meyers began with the news that Trump has revoked the credentials of the national newspaper the Washington Post. This adds to the growing list of outlets that include Politico, The Huffington Post, BuzzFeed, The Daily Beast and Univision.

"By election day, the only media outlet that's going to be allowed on Trump's campaign will be the National Enquirer and 'Rich Pricks Monthly,'" Meyers joked.

The fact that Washington Post cost Trump $1 million last month ago didn't have anything to do with it. Instead, Trump was angry that the newspaper reported his suggestion that President Barack Obama somehow assisted the Orlando terrorist who killed 49 people in an LGBT club Sunday morning.

"Sure, Trump didn't explicitly say it, he implied it with all the subtlety of an eighth grader's cologne," Meyers explained. Later in an interview, Trump had an opportunity to clear up that he was not trying to imply that the president of the United States sympathizes with terrorists. Instead, he said, "I'll let people figure that out for themselves."

"The worst part about Trump's campaign isn't just that he says crazy sh*t, but that he expects us to figure out the crazy sh*t he says," Meyers continued. "Listening to Trump is like opening up a fortune cookie, 'When it comes to catching worms, the early bird is the best, believe me, everyone says so,'" he said in his Trump voice.

Trump's "vague innuendo" is a tool he uses to appeal to the "vague outer fringes while also avoiding accountability," Meyers concluded, before playing an MSNBC clip of a pundit explaining that fringe people can believe Obama is a terrorist while moderates can believe that Trump didn't mean what people are saying.

"Trump's like a magic eye. You can look at him and see whatever you feel like seeing," the pundit said.

"Yes, Donald Trump is like a magic eye, in that if you look at him long enough you see different things. Like an orange beanbag with an old cat sitting on it, or the Nickelodeon splat," Meyers said.

Meyers said that his show believes in freedom of the press, and for that reason he stands in solidarity with the Washington Post and Trump will not be welcome on his show. Meyers then used the opportunity to mock other late-night shows like the Tonight Show who traditionally play games with Trump as part of their interview. "We could have gone to Coney Island and ridden the Cyclone in a segment we would have called 'Will His Hair Move?' We could have double dutched while talking about the day's news in 'Trump's Jumps.'"

Republican officials had hoped Trump would calm his incendiary rhetoric in the primary and become a more moderate candidate that doesn't scare the hell out of the typical Republican voter and the business community. That didn't happen, however.

"To be clear, this is bigotry, plain and simple. To claim any group of people, immigrants or anyone else, has anything in common with a terrorist murderer based simply on their ethnic background, or their religion or where they're from is dangerous and wrong," Meyers said after playing clips from Trump's press conference Monday. That doesn't even include the other false statements Trump made in the press conference. "He also claimed, without a shred of evidence, that there are Muslims in this country who are knowingly protecting terrorists."

Trump also tried to champion himself as a leader for LGBT rights telling Fox News he's better than Hillary Clinton for the gay community. "That's right, Trump is great for the gay community as long as you ignore all the times Trump has repeatedly expressed his opposition to marriage equality and promised to appoint Supreme Court judges who would overturn it," Meyers said.

"Trump is stoking fear and spreading hate and this is important," Meyers urged. "We can't become immune to it. We cannot allow it to become normalized. Which is why we need a robust, independent press like the newspapers Trump banned from his campaign to challenge the fearmongering and provide us with sober clear-eyed reporting. Otherwise, we're going to have to get all of our news from 'Rich Prick's Monthly.'"