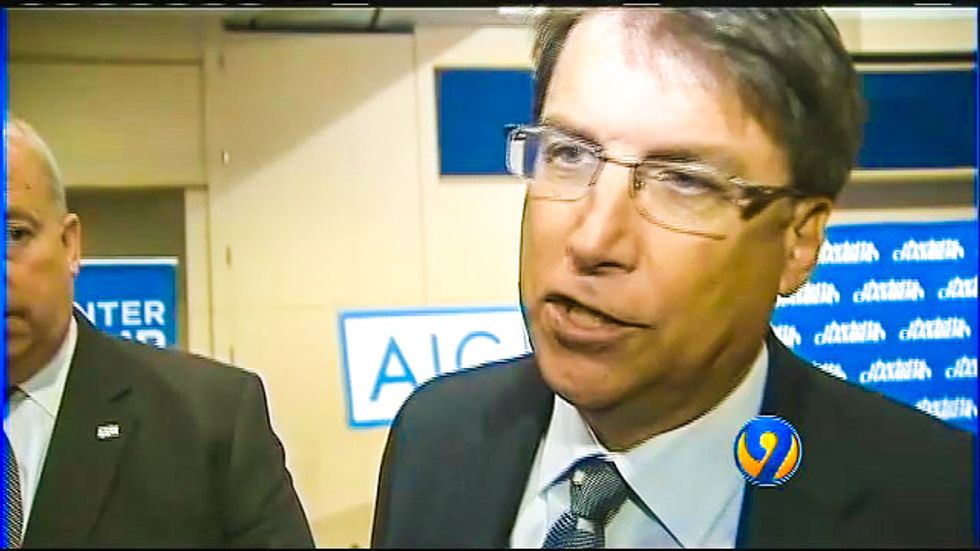 The Winston-Salem Journal said that McCrory was addressing annual North Carolinians for Home Education conference when he made the remarks, pledging to fight for what he called "respect for privacy" and to uphold "the norms that have been working for generations."

“One other advantage of home schooling," the governor said, "is you aren’t going to have the president, the attorney general or the mayor of Charlotte telling you what bathroom (to use).”

Again, the former Duke Energy executive foisted the blame for the law on Democrats, who he said forced the issue when the city of Charlotte passed nondiscrimination ordinances that included protections for transgender individuals as well as lesbians and gays.

Republican legislators threw together H.B. 2 in a rushed 12-hour session. The law's two most notorious tenets dictate that all North Carolinians must use public restrooms and other facilities that correspond to their biological sex rather than their expressed gender. The second part of the law -- which has raised considerable alarm among the state's legal watchdogs -- prohibits anyone from suing at the state level on grounds of employment discrimination.

The backlash against the state was swift and furious, with companies like PayPal canceling plans to open a service center in North Carolina and performers like Bruce Springsteen canceling their concerts there.

The state's Attorney General Roy Cooper -- a Democrat who currently running against McCrory for governor -- has declared that his office will not defend H.B. 2 in court.

"We're talking about discrimination here," said Cooper in March. "Not only is this new law a national embarrassment, it will set North Carolina's economy back."

A spokesman for Cooper's campaign said on Thursday, "Attorney General Cooper continues to stand against this discriminatory law that is driving jobs and people away from our state.”

McCrory's campaign responded by accusing Cooper of "gross incompetence" and urging him to step down from his position.

In his speech to the homeschooling conference, McCrory said, “He’s been half in his job and half out of his job with regards to representing the state of North Carolina. If you’re going to be the lawyer, you’ve got to be all in or not in at all.”

Not all of North Carolina's Republicans are willing to toe McCrory's hard line on the question of H.B. 2. Earlier this week, Sen. Richard Burr (R) said that he is willing to "roll back" the law's most controversial statutes.

Citing the potential for damage to the state's economy and reputation, Burr -- who, like McCrory, is up for re-election -- said, "It’s now time for the General Assembly to take the opportunity that if we can roll this back, that it’s probably in the best interests of North Carolina.”

Record Ernst & Young fine in US for cheating on ethics exams

US authorities fined Ernst & Young a record $100 million over cheating on accounting ethics exams that the firm initially covered up from regulators, officials announced Tuesday.

From 2017 to 2021, 49 audit professionals with the "Big Four" firm sent or received answer keys to Certified Public Accountant (CPA) ethics exams, according to a Securities and Exchange Commission order.