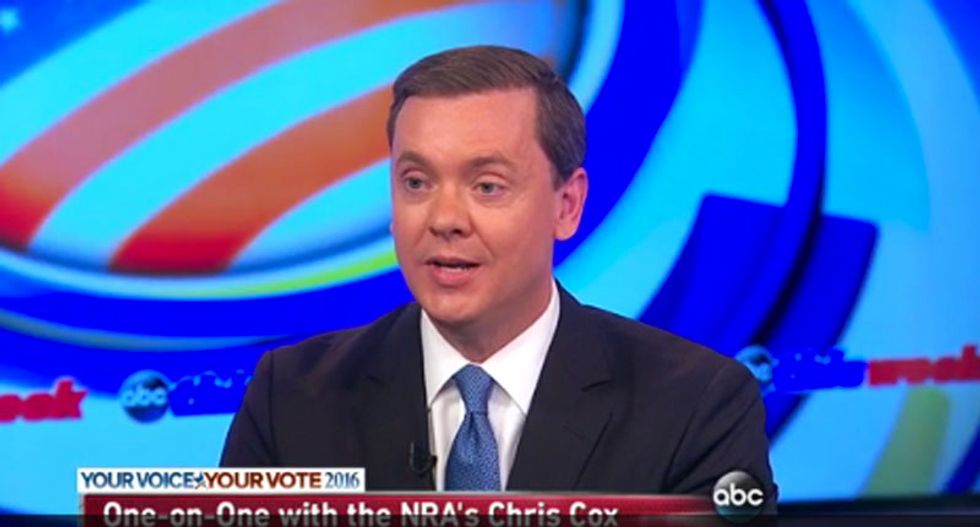 Chris Cox, the executive director of the NRA Institute for Legislative Action, on ABC- screengrab

Appearing on ABC's This Week, the NRA's top lobbyist slapped down presumptive GOP presidential nominee Donald Trump for saying club goers should carry guns to prevent another tragedy like the one that took 49 lives in Orlando last Sunday.

At a rally in Arizona on Saturday, Trump claimed, "If in that club, you had some people, not a lot of people -- but if you had somebody with a gun strapped  to their hip, somebody with a gun strapped on to their ankle and you had bullets going in the opposite direction, right at this animal who did this, you would have had a very, very different result."

While admitting that he agrees with Trump on many issues, Chris Cox, the executive director of the NRA Institute for Legislative Action, said Trump's suggestion is both dangerous and against the law.

"No one thinks that people should go into a nightclub drinking and carrying firearms," Cox explained. "That defies common sense. That also defies the law. That's not what we're talking about here."

Since the shooting, Trump has repeatedly stated that someone carrying a gun could have prevented it -- disregarding the fact that an armed off-duty police officer was inside the Pulse nightclub that night.