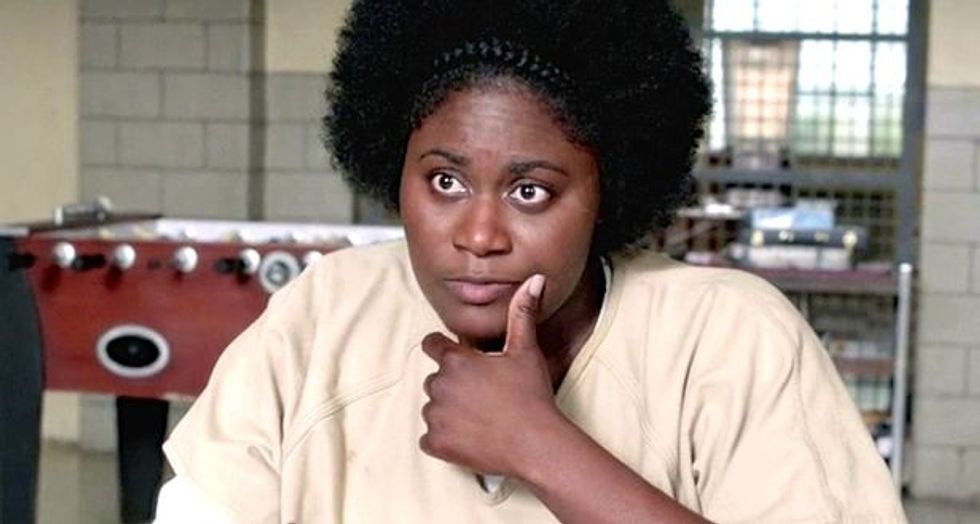 Orange Is The New Black, Netflix’s incredibly successful drama set in a women’s prison, returns this week for a fourth season, with at least three more to follow.

The portrayal of the women in the show has attracted much praise, with diverse, complex and well-developed characters, each of whom has the capacity to surprise or challenge. This is particularly evident in religious representation throughout the show, which astutely introduces audiences to the themes of women’s religious practice, community and identity. The issues faced by the Orange Is The New Black women transcend the fictional prison complex, remaining relevant in contemporary real life.

Explicit exploration of belief and religion was a major theme of the last season, and we can expect this to continue – the most recent trailer revealed a new inmate wearing a hijab, the first in the series.

Orange Is The New Black is inspired by Piper Kerman’s autobiographical account of her 13-month stint for drugs trafficking and money laundering. Set in the fictional Litchfield Penitentiary, the show is increasingly unafraid of tackling difficult topics through the lives of prison inmates and staff alike.

Conversation about religion traditionally only appears in film and TV when associated with the predictable weddings, births and funerals. Although these have been known to occur in Orange Is The New Black, Litchfield’s religious life is not primarily encountered through these generally benign events. Rather it comes to life in the day-to-day and ordinary, playing a major role throughout the show. These are stories of religious spaces, communities and practices present in the lives of the inmates: women, whose personal and communal religion is so rarely documented in popular culture. 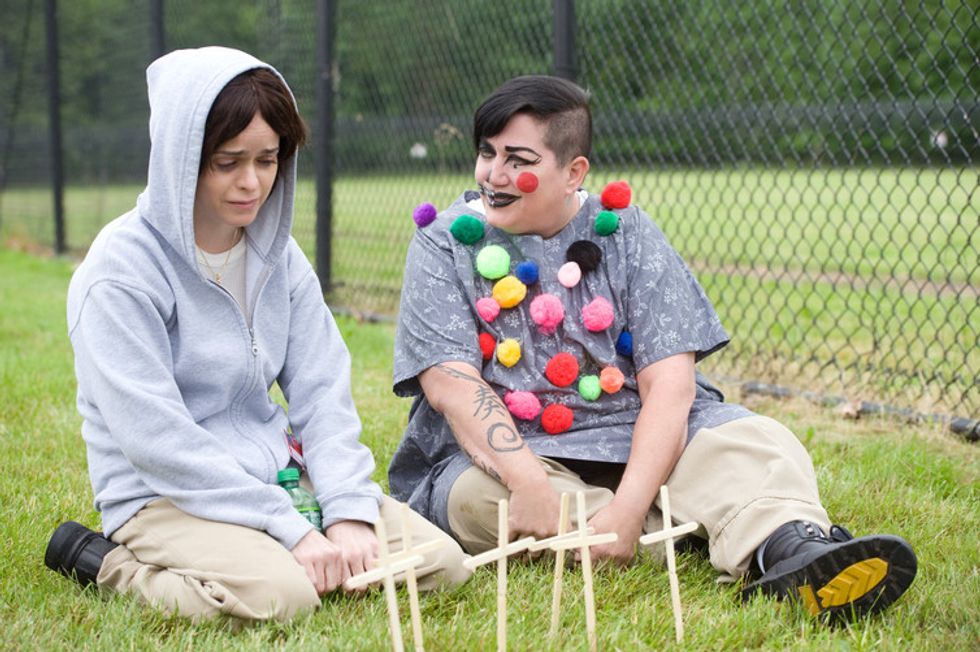 Religion and spirituality is found everywhere. In the kitchen, where Latina women conduct prayers and spells learned from foremothers. In the laundry, where a white group practice their own form of charismatic evangelical Christianity. In the gym, where the Alcoholics or Narcotics Anonymous groups intertwine meditation and yoga.

The more obviously religious space of the chapel rarely gains such use. Instead, it is a battleground between inmates and authorities, a space for breaking down barriers. The closest women come to God here in this traditionally religious space is hardly through prayer – the chapel is a typical meeting place for hook-ups, so perhaps they experience something religious through sexual pleasure. 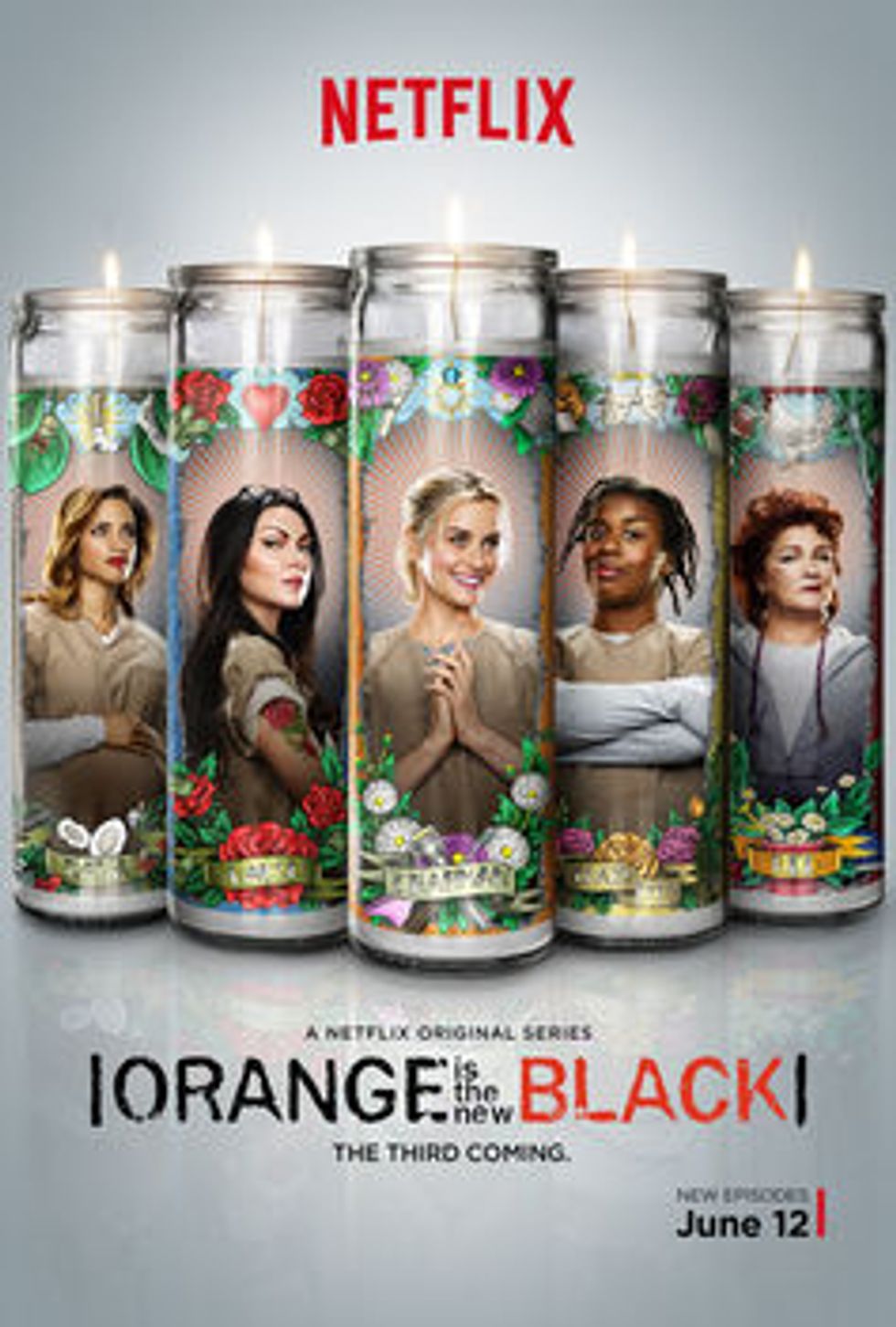 The religious lives of inmates reflect the broader complexity of their stories. Last season, Roman Catholic nun Sister Jane Ingalls (Beth Fowler) convinced a Rabbi she was Jewish in order to keep kosher meals – “the Abrahamic religions are all pretty much the same until you get to Jesus,” apparently.

Although more interested in selling her book and gaining publicity than religious teaching and authority, within the prison community Sister Ingalls is the go-to person on all things religious. “Black Cindy” Hayes (Adrienne C Moore) enthusiastically converted to Judaism after feeling rejection and alienation from her father and the church he pastors.

Then there’s Tiffany “Pennsatucky” Doggett (Taryn Manning), a self-appointed leader inspired by the religious communities who have funded and claimed her as a prophetic figure since she shot her abortionist. Right-wing religious, anti-abortion campaigners publicly celebrate and validate Pennsatucky because of her crime. She is martyr for their cause, and they provide her with an excuse. Religious indoctrination allows Pennsatucky to rewrite her own history.

And there’s shunned Amish inmate, Leanne Taylor (Emma Myles), who establishes fellow prisoner Norma Romano (Annie Golden) – a former member of a 1960s New Religious Movement – as a religious figure who grants miracles in Litchfield. Leanne bullies other inmates into following her rules, declaring herself to be the true interpreter of Norma-ism. In her need to belong to a religious group, she attempts to recreate what she misses from her Amish tradition. She is lost without her religion.

Whatever happens next, it remains clear that religion underpins identity in Litchfield penitentiary. Whether beliefs are accepted or rejected, religion remains inseparable from the sex and drugs, abuse and manipulation, power and identity in the lives of each individual and group. Orange Is The New Black puts religion under the microscope and allows us to peek into the religious lives of others. What makes the show so provocative and valuable is that it shows the outreaching impact of religion across society.

This is never more important than in the aftermath of acts of terror and violence such as the recent homophobic attack on the Pulse nightclub in Orlando. Religious lines are drawn to try and explain, condemn, ally or distance ourselves from the act. Orange Is The New Black shows that drawing such lines between religion and non-religion, between sacred and profane spaces, is impossible. It’s just not that simple.

Orange Is The New Black encourages us to question how we understand identity and community in light of religion. You can guarantee that the religion present in season four will confront, challenge and defy expectation, just as the earlier seasons have. But will we embrace that diversity in wider society?