Rep. Steve King backs full gun rights for terror suspects: It's 'their right to defend themselves' 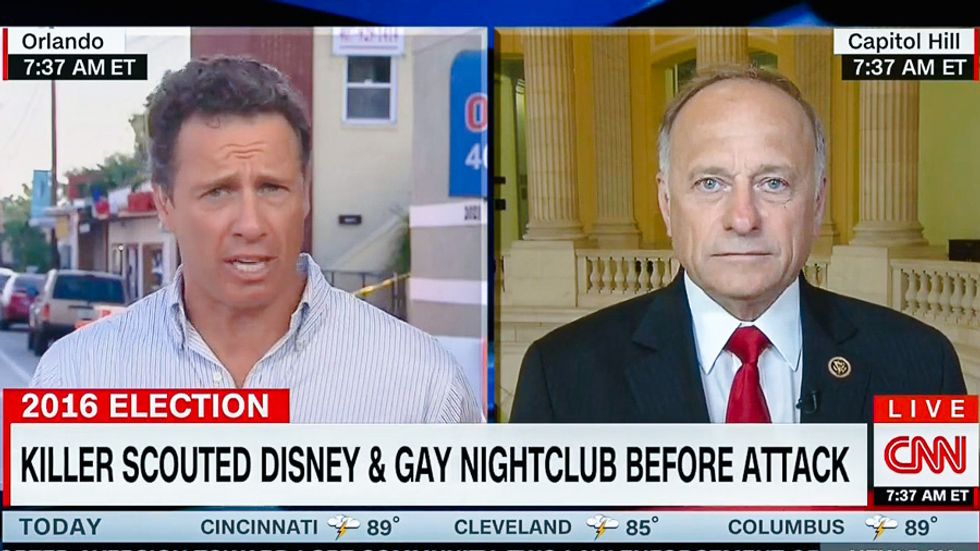 Rep. Steve King (R-IA) asserted on Wednesday that the shooting at Pulse nightclub in Orlando could have been prevented if people were not being "suppressed" by political correctness.

During an interview with CNN's Chris Cuomo, King argued that Donald Trump had "laid out some good policies" to address mass shootings.

"One of them is his immigration policy," he explained. "Let's suspend immigration from terrorist-sponsoring countries at least until we get a handle on this. I think that's a prudent statement. And yet, the crossfire is coming back as anti-gun."

"We want to have a prudent immigration policy, and the Democrats want to take away our guns!" King continued. "The very thing we need to defend ourselves from people like that shooter in Orlando."

King also said that he did not agree with people who said that the FBI, which investigated the shooter for ties to terrorism, should have been able to prevent his gun purchases.

"They did an investigation, they interviewed him two or three times, [then] they decided to close the investigation, they didn't have enough to move forward," King explained. "And so at that point, where would you then draw the line? Would you say that 15 years from now if that individual had been interviewed by the FBI, he couldn't buy a gun without setting off alarm bells?"

"The FBI did not have the authority to even talk to him [before he bought a gun]," Cuomo noted. "And now, this. You don't see that as a reasonable abridgment of Second Amendment rights in furtherance of investigative power for the FBI -- even after Orlando?"

King said that he was "willing to have the discussion."

"But I'm not willing to take the guns out of the hands of everybody who fits that category," the congressman insisted. "Because we're denying them their right to defend themselves too."

Instead, King recommended focusing on the shooter's wife and neighbors: "What about the people who should have been watching this? They're intimidated by political correctness."

"There are multiple interviews of people that saw him in the club, there were people at him employment that spoke up, and they were more or less suppressed because they said their criticism had to stop because they thought it was criticism because he was a Muslim," King opined. "That's what the FBI's conclusion was, that there really wasn't an unstable individual here, that it was anti-Muslim prejudice that was causing him his trouble at work."

According to King, "Donald Trump has got this right... if we are suppressed with political correctness to the point where we don't see something and say something out of fear [of] being criticized as some kind of bigot then America is not as safe as if we had freedom of speech and freedom of conscience."