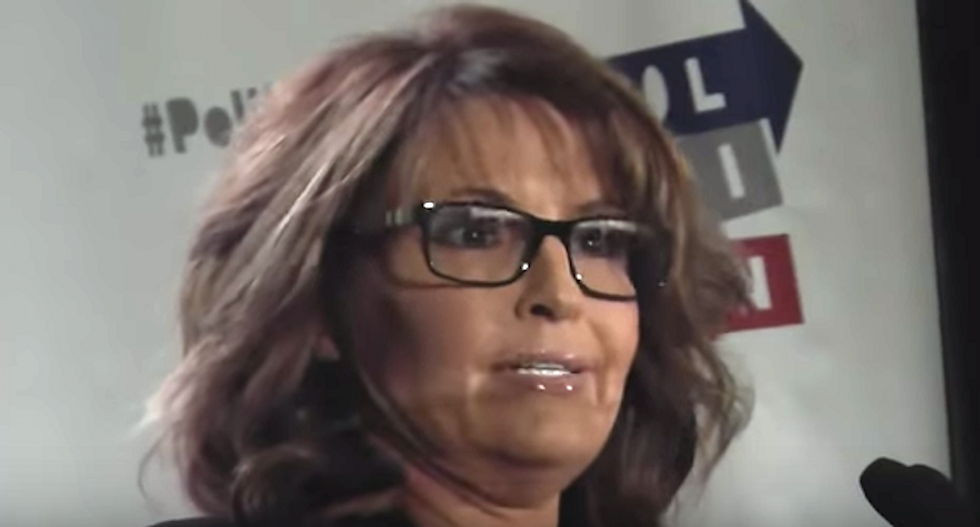 The former half-term governor of Alaska and failed Republican vice presidential candidate spoke Sunday at the Politicon 2016 conference in Pasadena, California, where she slammed Hillary Clinton as a member of the "good old boys club."

"They whispered that they're going to throw in for Hillary against the will of the people in their own primary, and this exposed the establishment's con game," Palin said. "More people learn it doesn't matter to the Beltway bubble boys and girls which side wins elections, as long as they get to keep their titles and their ratings and their power and their purses full. They win, we lose."

She accused the GOP establishment of disloyalty for allowing President Barack Obama to pursue endless foreign wars with no clear strategy, and she blamed them for allowing "unvetted illegals" to steal American jobs after crossing an unsecured border.

Now those same Republicans are attacking Trump for being insufficiently conservative, Palin said.

"The establishment, those profiles in pudding, they bent over for all those things, and now they fret about ideological, lily-white purity," she said. "The engine roared as they were busted for that. They claimed to then -- well, all we had for fuel was anger. I thought, 'What gall.' They lectured us for being too passionate about our country's future? Yeah, they stomp on our neck and then tell us to just chill out."

She said Trump supporters were motivated by more than anger.

"Really, it's an optimistic, sensible, building-up-the-people agenda -- and that's good change," Palin said. "But to (the professional political class), it's a threat. The players here -- well, obviously, it's the hard left -- but also, those GOPers insisting they'll never vote their party's choice."

She refused to say "never Trump," but instead called that faction "Republicans against Trump -- or RAT, for short."

"They're not all thumbsuckers, they're not all bad," Palin said. "I'm kidding -- they are. Hillary thanks them, because she knows she can't win without them."

Palin said the political establishment profited, but did not suffer, from open borders, moving jobs overseas or foreign intervention.

"Politicians pushing these -- they give lip service, but that can't even be trusted to even uphold their oaths and defend our rights," she said. "Look at all these new, recent Second Amendment attacks. "Shoot, after Obamacare's lie that, 'Eh, you like your doc? You can keep your doc,' it's going to be, 'You like your Glock? You can keep your Glock.' It's a lie."

She said Trump, as a real estate developer, could rebuild the United States.

"He looks up, and he builds big," Palin said. "Ask yourself, what have the critics ever built?"

Palin said Trump could relate to most Americans, despite being a billionaire, and understood that "men in denim built this country, but DC suits and pantsuits destroy it."

"He gratefully shakes skilled, calloused hands and tugs tight the blue collar, and he salutes in awe of sacrifice, the American in uniform," she said. "It's connection through appreciation, and I do wish you all could know him on that personal level."