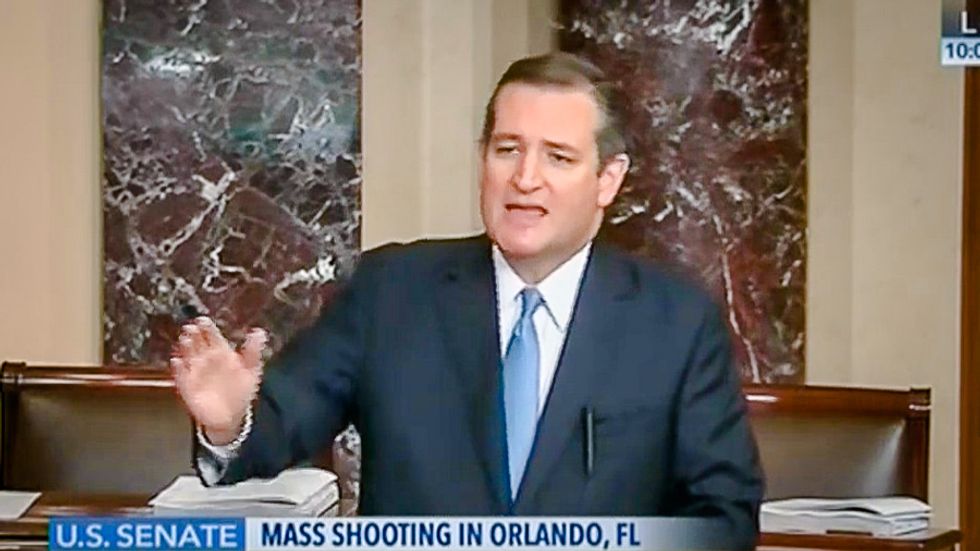 Sen. Ted Cruz (R-TX) lashed out at Senate Democrats on Thursday over a 15-hour filibuster to demand action on gun safety measures.

On Wednesday, Connecticut Sen. Chris Murphy (D) successfully seized control of the Senate floor from 11:21 a.m. until after 2 a.m. to force Majority Leader Mitch McConnell (R-KY) to allow a vote on expanded background checks and tighter gun restrictions for people on the terrorism watch list.

During a floor speech on Thursday, Cruz accused Democrats of grandstanding for partisan political purposes.

"In the wake of the attack, many of us predicted what would unfold," Cruz said. "And it was sadly the same political tale we have seen over and over again. Many of us predicted that Democrats would as a matter of rigid partisan ideology refuse to even say with the words 'radical Islamic terrorism.'"

"And that even worse, they would try to use it as an excuse to go after the Second Amendment rights of law abiding citizens," he continued. "Yesterday, we saw a political show on the Senate floor. Democrat after Democrat standing for hours incensed not at ISIS, incensed not at radical Islamic terrorism, incensed that Americans have a right to keep and bear arms."

"And I think the American people find it ridiculous," the Texas Republican sneered. "That in response to an ISIS terror attack the Democrats go on high dungeon that we've got to restrict the Second Amendment rights of law abiding citizens."

And Cruz knows something about filibusters because in 2013 he also seized control of the Senate and shut down the government in an attempt to defund President Barack Obama's health care reform law.

During the 21-hour filibuster, Cruz read Dr. Seuss' children's book Green Eggs and Ham, and he compared support for the Affordable Care Act to Nazi appeasement.