'That is not journalism': Cenk Uygur goes off on CNN host for counting superdelegates 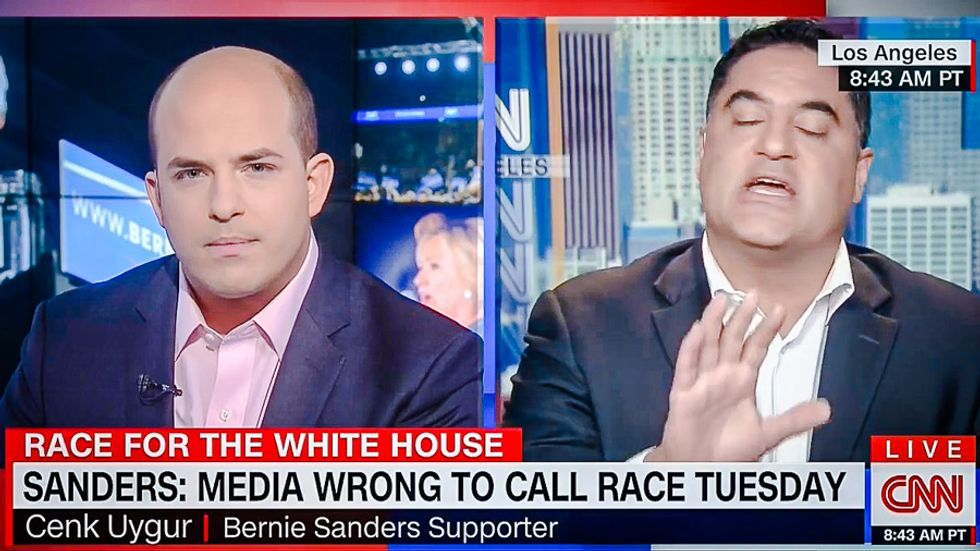 The Young Turks host Cenk Uygur lashed out at CNN during an interview on Sunday, saying the network had "tilted the playing field" by reporting the number of Democratic superdelegates that had declared support for Hillary Clinton.

"CNN and all of the establishment press totally tilted the playing field here from day one by counting those superdelegates," Uygur told CNN host Brian Stelter. "When in fact you know the superdelegates do switch their votes all the time. They switched them in 2008."

"It was, in fact, journalistic malpractice," he added.

"You're saying we should hide people from the reality about the superdelegates?" Stelter asked.

"If you count them in the official tally when you know they can and often do switch their votes and have not voted yet, that is simply incorrect," Uygur said. "That is the opposite of a fact."

Uygur argued that superdelegates were only meant to overturn the will of the Democratic primary voters in "extraordinary circumstances."

"You know what would be extraordinary? If one of the candidates were indicted!" he exclaimed. "You guys keep assuming there will be no indictment. And, Brian, I hear you have 'reliable sources' so do you have any sources inside the FBI or State Department that have already told you that she is not going to get indicted?"

"I do not," Stelter admitted. "But the indications are at the moment that she hasn't been interviewed by the FBI. I hear what you are saying about the indictment, but other than that, it seems to me, you're misleading your audience, giving them more hope than they should actually have."

"It's really exciting to say," the CNN host continued. "For the first time in this country, we're going to have a female nominee of a major party. I don't care if you're Republican or Democrat or Libertarian, that's something this country should note and acknowledge. Don't you think it's a shame that the Bernie Sanders talk is going to overshadow what we can all agree is an historic milestone?"

"Instead of looking at it as, 'Hey, one guy hasn't taken corrupting money and the other one has,' you frame it as male vs. female," Uygur said. "And hence, put me in a position where I'm forced to say, no, I don't think it would be historic because I think it's the same old establishment."

"I've said if there is more pledged delegates on her side and there's no indictment, well, then the race is over," he insisted. "Those are ifs though. They have not happened yet. And the superdelegates vote at the convention."

"So, for you guys to call it when you don't know what the circumstances are and those people have not voted yet, it is just simply incorrect. That is not journalism."

Watch the video below from CNN's Reliable Sources, broadcast June 5, 2016.