These epic Muhammad Ali quotes will never be forgotten 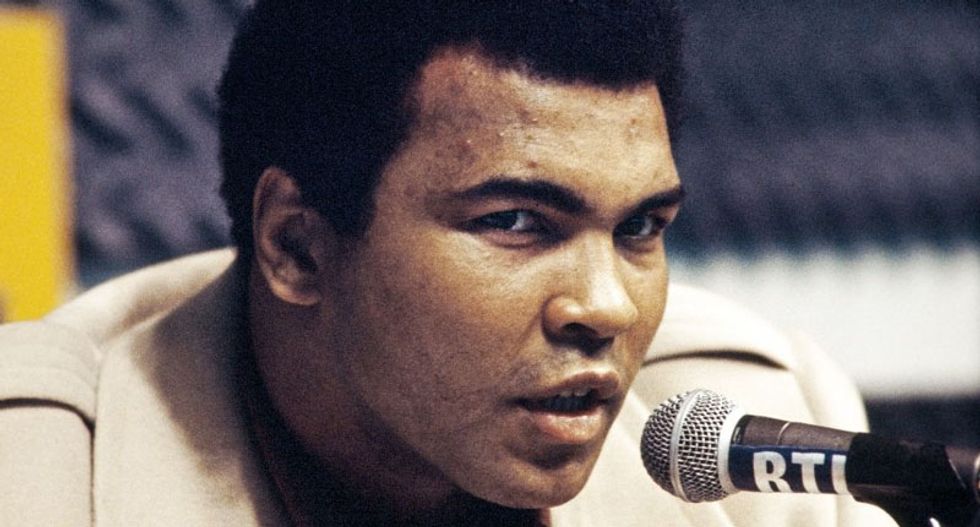 Boxing legend and civil rights icon Muhammad Ali passed away today at age 74. While he first gained fame for his prowess inside the ring as the world's youngest heavyweight champion in 1964, he quickly became known for his outspoken takes on current events. Below we've rounded up some of Ali's most famous quotes about politics, boxing and what he wants to be his legacy.

In 1967, when he was 25, Muhammad Ali received notice that he had been conscripted into the armed services. He objected on religious grounds. He made an official statement to explain why he would not serve in April, 1967.

Quotations from his statement when he refused induction into the armed forces in 1967:

“I strongly object to the fact that so many newspapers have given the American public and the world the impression that I have only two alternatives in taking this stand: either I go to jail or go to the Army. There is another alternative and that alternative is justice. If justice prevails, if my Constitutional rights are upheld, I will be forced to go neither to the Army nor jail. In the end I am confident that justice will come my way for the truth must eventually prevail.”

When speaking about why he was refusing conscription:

"My conscience won't let me go shoot my brother, or some darker people, or some poor hungry people in the mud for big powerful America. And shoot them for what? They never called me nigger, they never lynched me, they didn't put no dogs on me, they didn't rob me of my nationality, rape and kill my mother and father. ... Shoot them for what? How can I shoot them poor people? Just take me to jail."

On March 29, 1967, Muhammad Ali went to Louisville to meet with Martin Luther King, Jr., who was speaking at the University of Louisville on the following day. Here are some of the things that Ali said while he was in Louisville:

“Why should they ask me to put on a uniform and go 10,000 miles from home and drop bombs and bullets on Brown people in Vietnam while so-called Negro people in Louisville are treated like dogs and denied simple human rights? No I’m not going 10,000 miles from home to help murder and burn another poor nation simply to continue the domination of white slave masters of the darker people the world over. This is the day when such evils must come to an end. I have been warned that to take such a stand would cost me millions of dollars. But I have said it once and I will say it again. The real enemy of my people is here. I will not disgrace my religion, my people or myself by becoming a tool to enslave those who are fighting for their own justice, freedom and equality.… If I thought the war was going to bring freedom and equality to 22 million of my people they wouldn’t have to draft me, I’d join tomorrow. I have nothing to lose by standing up for my beliefs. So I’ll go to jail, so what? We’ve been in jail for 400 years.”

“In your struggle for freedom, justice and equality I am with you. I came to Louisville because I could not remain silent while my own people, many I grew up with, many I went to school with, many my blood relatives, were being beaten, stomped and kicked in the streets simply because they want freedom, and justice and equality in housing.” (Source of 2 previous quotations: As quoted in Redemption Song: Muhammad Ali and the Spirit of the Sixties (1999) by Mike Marqusee)

"If you were surprised when Nixon resigned, just watch what happens when I whup Foreman's behind!" (Source: When We Were Kings (1996))

"I knew I had him in the first round. Almighty God was with me. I want everyone to bear witness, I am the greatest! I'm the greatest thing that ever lived. I don't have a mark on my face, and I upset Sonny Liston, and I just turned twenty-two years old. I must be the greatest. I showed the world. I talk to God everyday. I know the real God. I shook up the world, I'm the king of the world. You must listen to me. I am the greatest! I can't be beat!"

Ali flew into the national spotlight with his defeat of Sonny Liston in 1964. At the time, Ali was the world's youngest heavyweight champion ever.

"Boxing is a lot of white men watching two black men beat each other up."

On October 29, 1974, Ali fought George Foreman in Zaire. The fight was called "The Rumble in the Jungle," and in the pre-bout hype, Ali kept reporters happy with his banter with them, and his constant game of "Yo Mama" with Foreman. This fight was when Ali announced that he would "sting like a bee," a phrase that has continued to be associated with the fighter.

"Floats like a butterfly, sting like a bee, his hands can't hit what his eyes can't see."

"I done wrestled with an alligator, I done tussled with a whale; handcuffed lightning, thrown thunder in jail; only last week, I murdered a rock, injured a stone, hospitalised a brick; I'm so mean I make medicine sick." (This quotation can also be heard in the trailer for "When We Were Kings," the documentary about the fight.)

"I'm so fast that last night I turned off the light switch in my hotel room and got into bed before the room was dark."

Ken Norton, who was a relative unknown, beat Ali in March, 1973. Ali said this about his defeat:

"I never thought of losing, but now that it's happened, the only thing is to do it right. That's my obligation to all the people who believe in me. We all have to take defeats in life."

How Ali wants to be remembered

Ali's interview with David Frost in 1972:

David Frost: What would you like people to think about you when you've gone?

He took a few cups of love.

He took one tablespoon of patience,

One teaspoon of generosity,

One pint of kindness.

He took one quart of laughter,

One pinch of concern.

And then, he mixed willingness with happiness.

He added lots of faith,

And he stirred it up well.

Then he spread it over a span of a lifetime,

And he served it to each and every deserving person he met.

"Death is so near, and time for friendly action is so limited. Love and peace always."

With additional writing by Arturo R. García and Brad Reed