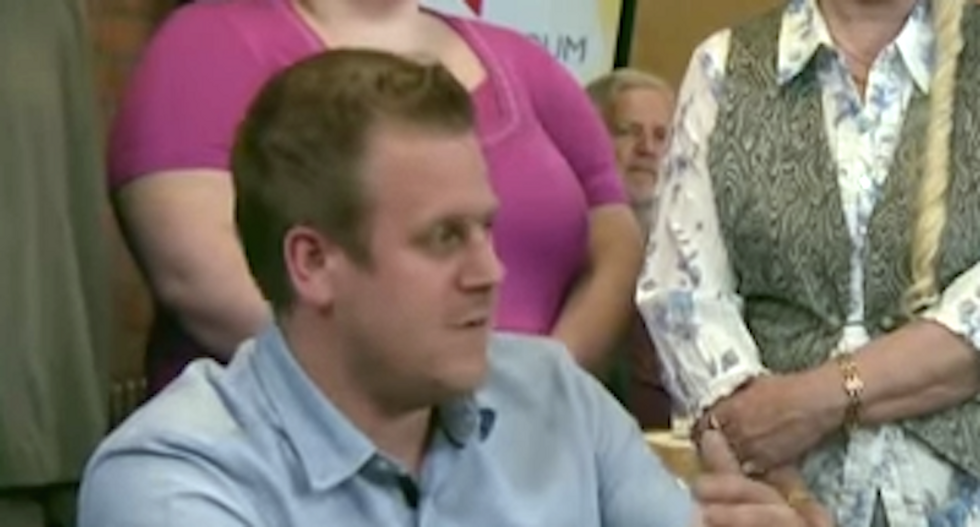 A British voter offered the most terrifying example of foreshadowing how Donald Trump could win the U.S. presidential election.

The voter, identified only by his first name, Adam, told the BBC that he'd voted to leave the European Union -- but he never actually thought it would happen.

"I’m a bit shocked to be honest," Adam said. "I’m shocked that we actually have voted to leave, I didn’t think that was going to happen."

Adam's vote to leave the EU helped send the British pound plunging to its lowest level in more than 30 years, and American and other European stock markets dipped with British voters' decision.

Why did Adam do it?

"My vote, I didn’t think was going to matter too much because I thought we were just going to remain, and the David Cameron resignation has blown me away, to be honest," he said. "I think the period of uncertainty that we’re going to have for the next couple of months, that’s just been magnified now -- so yeah, quite worried."

Google data suggests that Adam -- and many other British voters -- cast their Brexit ballots without really understanding the possible ramifications.

The search engine giant reported that searches for "what happens if we leave the EU" spiked about midnight British time -- or two hours after the polls closed, reported The Verge.

Analysts had warned that Britain and its allies would suffer some of the ramifications that have already been observed, just hours after Brexit results were announced -- just as economists have warned that Trump's proposals could destroy the U.S. economy.

Even so, the real estate developer and reality TV star is poised to win the Republican presidential nomination and remains close behind his likely Democratic rival, Hillary Clinton, in national polls.

There's a lot of anecdotal evidence floating around that some Trump supporters -- including a few Democrats -- might cast a ballot for him just to see what would happen or even to purposefully wreck the U.S. economic and political system in hopes of triggering broad reform.

It's impossible to know whether they believe those far-fetched fantasies might come true, or if they simply think their vote would be a form of protest against what they see as a corrupt system.

But it's not hard to imagine some dazed Trump voter on Nov. 9, the day after Election Day, regretting that he'd help make America a dystopian nightmare -- which would not be great.