Trump bro defends himself after viral tirade: Whites are 'only race you can legally discriminate against' 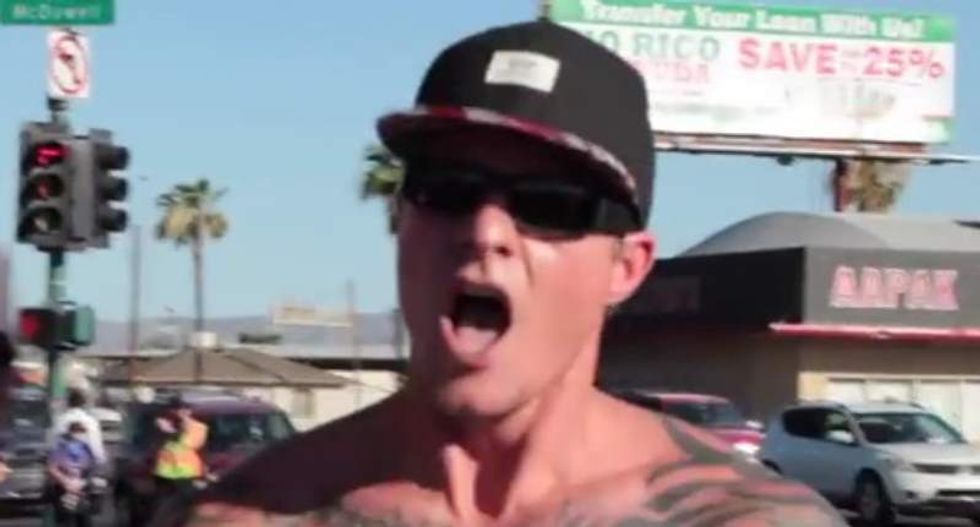 The 30-year-old Donald Trump supporter who was filmed yelling obscenities at protesters came forward, saying someone spat on him before he was filmed and "loves all colors."

"It sucks that people are scared to stand up for what they believe in, and yet Latinos can do it and it’s fine. And if we do it? We're racist," Zack Thomas told The Tab. "White people? The only race you can legally discriminate against. People make movies about us and do we get mad? Like White Chicks? If there was a movie called Black Chicks, it would be a huge race thing."

Photographer Eric Rosenwald captured Thomas on video outside a rally for the presumptive GOP candidate in Phoenix as he told protesters, "Get the f*ck out of here — our country, motherf*cker, our country," and "Go f*cking make my tortilla, motherf*cker, build that f*cking wall for me."

Thomas accused the protesters of "bringing the hate" to the event, saying they taunted him by saying, "you like that taco, you like that burrito in your mouth?" and claiming that they were going to turn the US into Mexico.

"I got spit on my face, you can see on those videos, it's clearly on my face," he argued. "I don't know who has AIDS, or who has anything disgusting, but I don't want that on my face. You don't do that, that's very disrespectful. I lost my temper, man. My friend was over there getting harassed, they ripped his sign out of his hand."

Thomas did not comment on the "43" tattoo seen in the video -- a symbol that has been linked to the hate group known as the Supreme White Alliance. He did say, however, that he felt forced to carry a gun with him at all times, and expressed frustration with "political correctness."

"I'm going to go on as many talk shows as I can, just to make people know we aren't racist. We love Mexicans, we don't like illegals," he said. "Like I said in that video, it's not right. Come into this country legally, and we won't have a problem at all. I don't get it. Our problem is with ISIS, our problem is with fixing the entire world that's going down the drain."